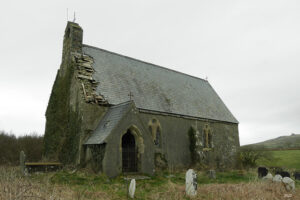 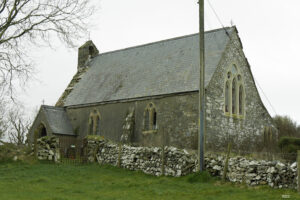 The present church consists of a 2-bayed chancel, a wider 2-bayed nave, a single-bayed vestry north of the chancel, and a south porch. Construction is in limestone and slate rubble throughout, roughly squared and coursed, quoined. The external pointing is good quality, from 1860; the south walls lie beneath 20th century external render. All internal walls are rendered/plastered. All dressings are in oolite; the detail is all from 1860 and simple neo-gothic. It includes the chancel arch, the windows with 2-centred surrounds, and the 2-centred south and vestry doors. There is limited external buttressing. The nave west wall carries a gabled single bellcote with a 2-centred opening, from 1860. The vestry features a chimney, also from 1860, with a flue from a fireplace (and heating apparatus?). The roofs are slated gables from 1860; the nave and chancel roofed continuously; the vestry roof is a slated lean-to. The floors are suspended and from 1860.

In the north-west angle of the nave is a plain niche containing a re-used stoup (RCAHM, 1925, 174), which is filled by a natural spring permeating up through the church walls (cf. Cynwyl Gaeo, Carms.).

The form of the earlier church is not properly known, and no full contemporary account, or reliable map depiction, is known. It was described as ‘not remarkable for any architectural details’ in 1833 (Lewis, 1833).

St David, Llanllawer, was not a parish church during the post-conquest period, but a chapelry of the medieval Deanery of Cemais (Rees, 1932). The benefice was always appendant to the Barony of Cemaes, and in 1594 it was annexed to Llanychlwyddog chapel (Green, 1912, 250), a union that persisted into the 20th century.

There is no valuation for Llanllawer in either the ‘Taxatio’ of 1291 or the ‘Valor Ecclesiasticus’ of 1536, and in 1786 the benefice was briefly referred to as discharged in Bacon’s ‘Liber Regis’ (ibid.).

In 1998 St David, Llanllawer, was a parish church, but had been closed for some years. The living was held with Newport, Cilgwyn and Dinas (Benefice 813), in the Archdeaconry of  Cardigan, Rural Deanery of Cemais and Sub-Aeron (St Davids, 1997-8).