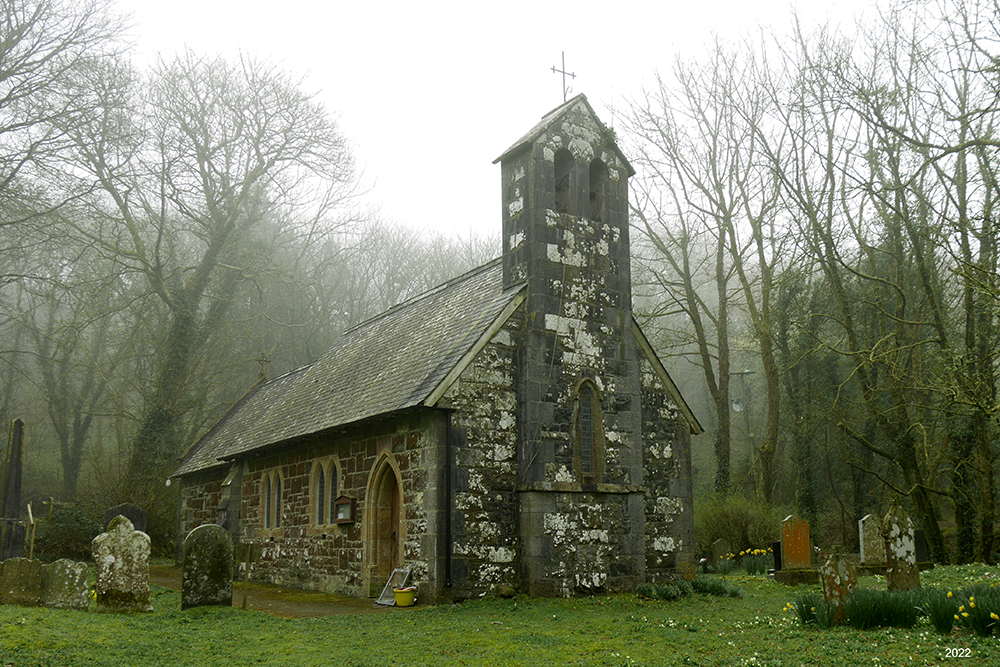 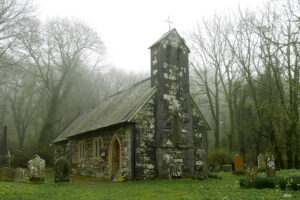 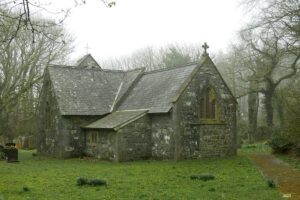 Reasons for Listing: Listed for its special architectural and historic interest as a well-detailed small Victorian church of unusual quality, notable for the simplicity and coherence of its design.

The present church consists of a 2-bayed chancel, a 3-bayed nave, a south transept and a lean-to vestry of 1 bay, against the south wall of the chancel west bay and joining the transept east wall.

Construction is in squared, rusticated rubble throughout, possibly rhyolite, with ashlar quoins. The external pointing is good quality, repointed 1923?. All internal walls are rendered/plastered, all replastered 1923?. The entrance doorway is in the nave north wall. All dressings are in sandstone; the detail is all from c.1876 and neo-gothic. It includes the chancel arch, the windows, with plain 2-centred surrounds, and the 2-centred north and vestry doors. A large projecting buttress on the nave west wall carries a gabled bellcote with 2 simple openings, of c.1876. The roofs are slated gables while the vestry has a slate lean-to roof, all c.1876. The floors are suspended except in the porch, and from c.1876.

There is no physical evidence for the earlier church. No external drain or cutting is present. There is no evidence for internal floor level changes. There is an underfloor void beneath the suspended floors, but no vault or crypt is evident.

A detailed description of the earlier church was written in 1872 (Glynne, 1898, 359-60) and is reproduced here almost in full. It was accompanied by a contemporary illustration, from the south-east. The building followed the same plan and, it seems, the same dimensions as its successor; the tithe map (NLW, Llanychaer, 1842) is unfortunately faint and unclear in the area of the church but the c.1876 church was apparently ‘built on the old foundations’ (Glynne, op. cit.). The church as described appears to have retained a substantial percentage of medieval fabric, possibly largely 14th century; the walls were very low and the construction ‘extremely rude’. It comprised the chancel, nave and south transept mirrored in the present church (and frequently encountered in the region), but the component between the chancel and the south transept where the vestry now lies was a transeptal, gabled structure described as a chapel of the family of Cilceffeth, and which may have been 15th-16th century. The door was in the nave north wall as in the present church. There was a western single bellcote, of indeterminate date, with a bell. There were no windows in the north wall, while the east window was a segmental-headed sash of 18th-early 19th century date. A slit-light of possible medieval date was present in the south chapel east wall. The chancel arch was semicircular (‘pointed’ according to a footnote). The south chapel had apparently replaced a skew passage, its ‘rude, flat arch’ from the south transept surviving as access to the chapel, while between the chapel and the chancel there was no arch, ‘but merely a flat beam’. The form of the present building to a great extent copied that of the old church, but the vestry is a smaller structure than the south chapel and with a lean-to roof; the form of the connecting arch with the transept was however retained (ibid.). The chancel arch was made larger (ibid.).

In 1684 the churchwardens presented the chancel roof as being ‘out of repair’; a pulpit, and the present font (see below), are mentioned in passing (Evans, 1927, 394). Samuel Lewis, writing in 1833, described the church as ‘not distinguished by any architectural details of importance’ (Lewis, 1833). By 1872, it was ‘fast hastening to decay’ and presented ‘a sad spectacle…the roof is dreadfully out of repair, the furniture ruinous and the church disused save for funerals’ (Glynne, 1898, 359).

The font was retained from the earlier church. It comprises a square, scalloped bowl, a cylindrical stem and a square base, all of probable 12th century date; it has been redressed.

The present church underwent some restoration in 1923 including replastering and probably repointing (RCAHM, 1925, 197); the extent to which the c.1876 finishes were removed is not known.

The present church was Grade II listed in 2020.

Reason for listing: Listed for its special architectural and historic interest as a well-detailed small Victorian church of unusual quality, notable for the simplicity and coherence of its design.

In 1998 St David, Llanychar, was a parish church. The living was a rectory, held with St Mary Fishguard and Pontfaen (Benefice 814) in the Archdeaconry of St Davids, Rural Deanery of Dewisland and Fishguard (St Davids, 1997-8).

(There has been much debate concerning the origins of the place-name, normally rendered ‘Llanychaer’; Llanychar is now the approved spelling.) 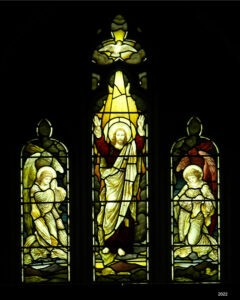