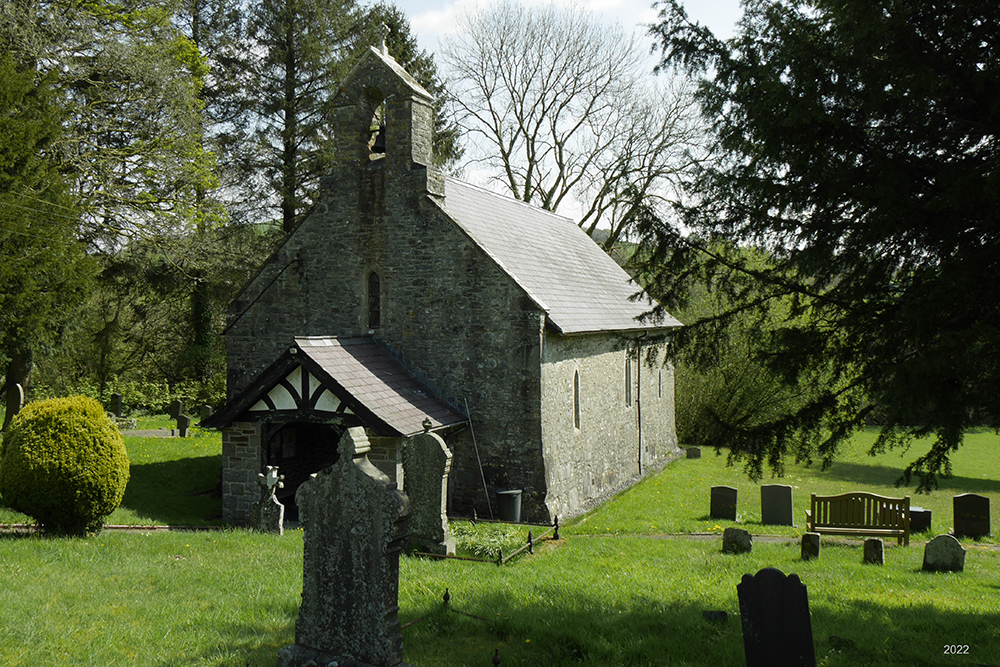 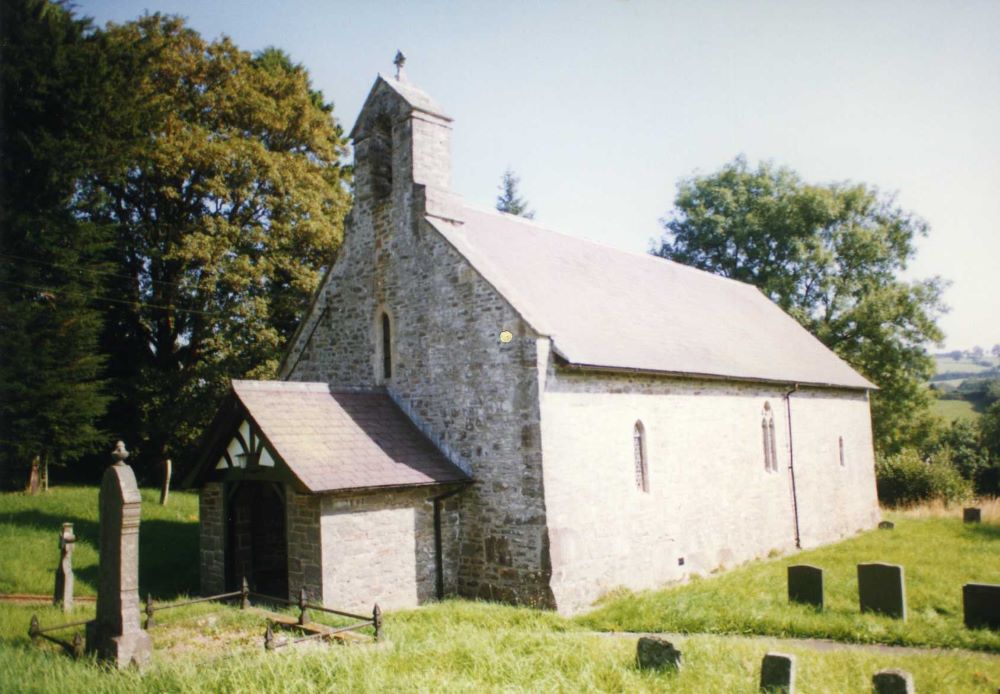 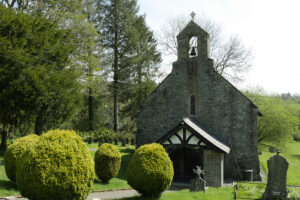 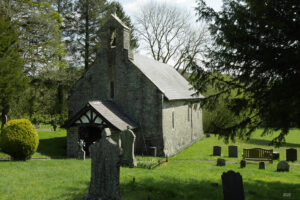 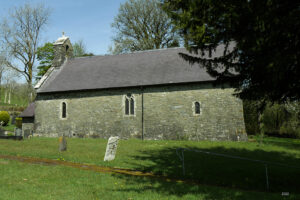 Archaeological potential – very good. 20th century gravel soakaway around 100% of church; floors raised?; suspended over heating ducts in 80% of church; below ground floor in 10% of church?.

The present church consists of a 4-bayed chancel/nave, without structural division, a west porch, a vestry north of the central bays, and a lean-to coalhouse east of the vestry. Construction is in local rubble throughout; dressings are sandstone, from the mid 19th century, 1891-2, and c.1920. Pointing is from 1892 and c.1920; the interior is plastered except for the west wall, porch and coalhouse. Roofs are slated gables, the vestry and coalhouse have slated lean-to roofs.

The chancel/nave walls are battered externally. The east window is of 3 uncusped lancets from 1891-2. There is a cusped single lancet in the north and south walls of the east bay, from the mid 19th century. A 2-light window in the centre of the south wall was rebuilt with cusps and simple tracery in 1891-2. The west bay features a single light window with a simple square surround in the north wall, from the mid 19th century, and a single lancet in the south wall new in 1891-2. The north wall formerly featured a central square projection housing a straight rood-loft stair, of medieval date (cf. Llanwnnws and Mwnt, Cer.); The doors both survive and are simple, square openings. The moulded west door was rebuilt in 1891-2, the single lancet above is from the mid 19th century. A gabled, single bellcote lies on the west gable, shouldered, with a semicircular-headed opening, all post-medieval?. The softwood roof lacks trusses but all rafters are collared, from 1891-2. The floor is quarry-tiled in the east bays; elsewhere the passages are flagged, over heating ducts, with suspended board floors, all from 1891-2.

The west porch is from c.1900. It has solid side walls; the west end is open. The gable and roof are of oak, without trusses, but the gable end has a tie-beam queen- and princess-posts with plaster panelling. The floor is flagged as the nave passages.

The church is surrounded by a gravel soakaway from the later 20th century. Floors may have been raised; they are suspended over heating ducts in the chancel/nave. The coalhouse floor may be below ground. No external memorials lie significantly close to the church.

The chancel/nave is medieval but cannot be closely dated; it may have been largely rebuilt in the post-medieval period, the rood stair exhibiting large basal rubble which is also seen in the south-west corner and perhaps represents the medieval core fabric. The west porch was added c.1900 and the vestry and coalhouse were built ?c.1920.

It is apparent that there had been some restoration work in the mid 19th century when most of the present windows were inserted, and the church was floored in concrete.

The church was restored again in 1891-2 to the designs of the architect Ewan Christian, of London (NLW, SD/F/458). It was entirely reroofed, refloored and reseated, the east window was rebuilt, the nave south wall was partly refenestrated and the west door was rebuilt. At a later period, but before 1908, the present west porch was added (NLW, Ordnance Survey 1:2500, Second Edition, Sheet VIII.8); later still (c.1920?), the present vestry (and coalhouse?) was added removing the rood-loft stair.

The limestone font has a square bowl of medieval date; the square stem and base are 20th century.

It had become a parish church by 1833 when the living was a perpetual curacy endowed with £600 royal bounty and £200 parliamentary grant, in the patronage of John Bowen Esq. who was the impropriator of the tithes (Lewis, 1833).

In 1998 St David, Llanycrwys, was a parish church. The living was a vicarage, held with Pencarreg (Benefice no. 619) in the Archdeaconry of Carmarthen, Rural Deanery of Lampeter and Ultra-Aeron (St Davids, 1997-8).