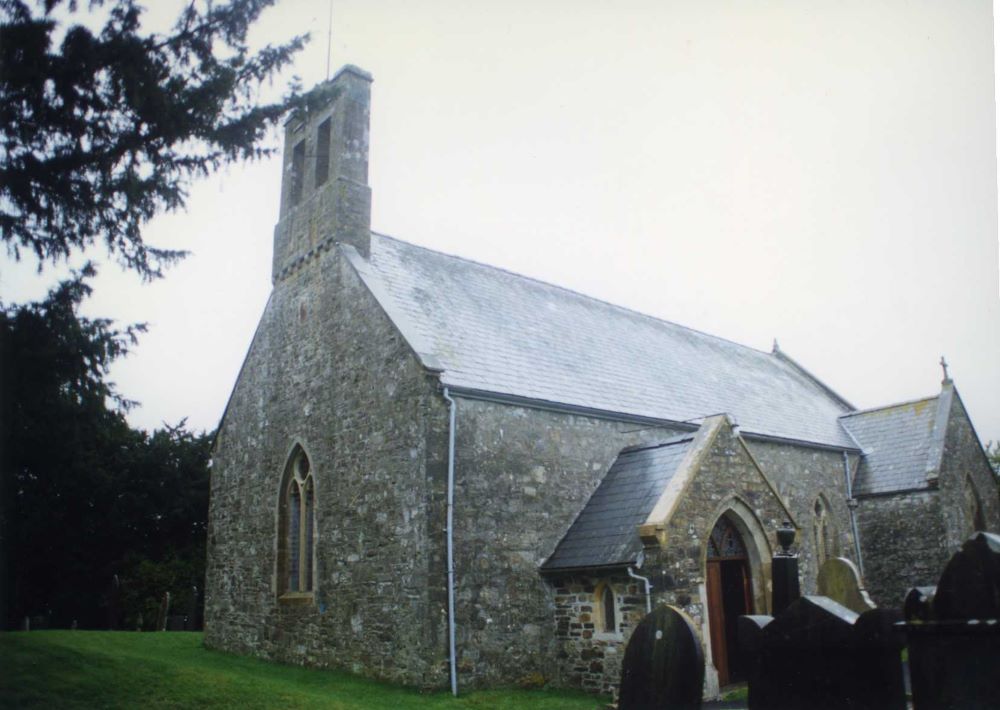 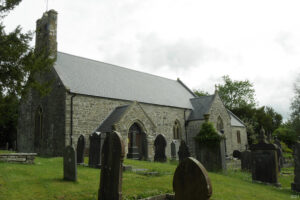 Reason for Listing: Included as a restored medieval church with unusual bellcote and C18 memorials.

The present church consists of a 3-bayed chancel, a 4-bayed nave, a single-bayed north transept, a single-bayed south transept, a south porch, and a single-bayed vestry north of the chancel west bays. Construction is in mixed local rubble. There are some medieval openings but dressings are mainly from 1889, neo-Gothic, in yellow oolite; some may replicate medieval originals. Pointing is from 1889, with extensive, good later 20th century repointing; the interior is plastered. Roofs are slated gables; the vestry has a slated lean-to roof.

The chancel east gable upstand may have been lowered in the 20th century; the south wall has a slight external batter and the north wall has a slight internal batter. The east window has a depressed semicircular  rear arch and outer arch which may both be pre-19th century; the 3-light window has ‘Perpendicular’ tracery from 1889. The east bay north and south walls are both pierced by a segmental-pointed embrasure that may both be from the 16th century (the northern rebuilt, with infill) but which now contain 2-light windows, with cinquefoil-cusped heads and sunk spandrels, in square surrounds, 1889 copies of 16th century originals?. Internally, the east wall exhibits a simple square recess low down in the northern half, medieval?, an aumbry?, while the south wall displays a segmental-headed piscina. The west bay is entered from the churchyard through a ‘priest’s door’ in the south wall which occupies a cut-out in the batter, has a very rounded 2-centred head from the 13th century, and a 19th century lintel to the rear. To the west is a single, cusped lancet, all from 1889. The plain, 2-centred chancel arch is without detail but may be 13th – 14th century; above it is a simple square light, with a plain limestone surround, into the roof space, medieval. The softwood ‘wagon-roof’ has matchboarded panels, all from 1889. The passages are tiled, with suspended board floors, from 1889; there are marked burials below.

The nave walls are in larger rubble and roughly squared. The north wall has a single window high in its east end, with a ?16th century, segmental-headed embrasure and a 2-light window with sunk cusps and spandrels, in a square limestone surround, an 1889 copy of a 16th century original?. A square area of blocking to the west, at the same level, may represent the site of a former, similar window. The south wall is lit by 2 windows, each of 2 lights with simple Geometric tracery, all from 1889; there is a similar window in the west wall with a simple, medieval slit-light into the roof space over. The south door lies in the west bay, and has a segmental rear-arch that may be medieval, and a 2-centred chamfered surround rebuilt in 1889. The west wall carries a massive, rectangular bellcote on an external corbel table, above which is an offset and the bellcote itself; this features 2 plain square openings between which rise coped ‘merlons’, all from the earlier 19th century, 1835?. The nave has a similar softwood ‘wagon-roof’ to that in the chancel, 1889. The passages are quarry-tiled over a void, with woodblock floors, all from the early 20th century, over blocked former heating chambers and flues from 1889.

The north transept communicates with the nave via a simple, segmental-pointed arch, medieval. The east wall is thickened to carry a straight stair to the former rood-loft, medieval; the stair is entered through a doorway with a depressed segmental-pointed head, 14th century?, and terminates as a square buttress at the junction with the chancel north wall, with a 20th century concrete cap. It is lit by a simple slit light, which now opens to the vestry; the rood-loft door itself has been blocked and is no longer traceable. The transept is lit by a window in its north wall which has a rounded, segmental rear arch, and external lintel, of medieval date; the present uncusped triple lancet is from 1889 but may again copy the original. A small lancet above is also from 1889. The transept is roofed and floored as the nave.

The south transept communicates with the nave via a simple, segmental arch, medieval. It is lit by a single uncusped lancet in the east wall, from 1889, and a window in the south wall like the nave south windows and also from 1889. It is roofed and floored as the nave.

The vestry is from 1889. It is entered through a contemporary full-width, 4-centred arch in the chancel west bay, and there is a doorway from the churchyard in the east wall with a 4-centred surround. It is lit by 2 cusped lancets in the north wall, also from 1889. A fireplace in the south-east corner shares a flue with the former heating apparatus which leads to a octagonal chimney with a moulded and crenellated stack, from 1889. The roof line may originally have been higher; the present lean-to roof is matchboarded in softwood, post-1889?; the woodblock floor is early 20th century.

The south porch was added in 1928 in a similar neo-Gothic style. The 2-centred doorway has a contemporary, simple surround and drip-mould and there is an uncusped, single lancet in each of the side walls, all rather weathered. The softwood roof lacks trusses and is matchboarded, also from 1928 as is the flagged floor laid directly on the substrate, flags re-used?.

A brick-lined drain runs around the northern half of the church, from 1889?, exposing the north transept footings. A very wide, very shallow, regular earth cutting runs along the west wall, primary?. Floors are, or were formerly suspended over a void in the chancel, nave, transepts and vestry. Two heating chambers, and flues, formerly lay beneath the nave. There may be burials beneath the chancel. Few external memorials lie significantly close to the east wall.

The church was termed ‘an ancient edifice of Norman architecture’ in a later edition of Lewis, 1833 (Evans, 1993, 19); but there is now evidence for any 12th century work. The nave, however, may be this early in its original form; it is of different construction to the chancel, which represents a 13th century addition, albeit long, being entered through a ‘priest’s door’ of 13th century character. The transepts are unequal in size, the northern being larger, and their arches differ, but both may be later 14th century if not contemporary. If the present fenestration is, in part, a reliable copy of the original windows, then it appears that a major refenestration occurred c.1600. There were 2 bells, presumably within a western bellcote, in 1552 (Wallcott, 1871, ii).

It appears that the medieval rood-screen may have survived the Reformation, for in 1780 the churchwardens presented ‘the Lord’s Prayer, the Creed and the Ten Commandments which are upon the west front of the oldest gallery (my italics)’ were ‘now rotten and torn’ (Evans, 1919, 45); the stair survives.

Some building work was undertaken in 1835 (RCAHM, 1935, 214) during which a 15th century bowl was uncovered ‘beneath the font’; the extent of this work is unknown but the present bellcote is earlier 19th century in style. A western gallery was present in the earlier 19th century (Evans, 1919, 45).

The church was restored in 1889, to the designs of the architect F. R. Kempson, of Bromyard and Llandaff (NLW, SD/F/502). The Faculty specifications are brief, and certain proposals were not undertaken (the chancel arch, for instance, was not rebuilt). However, generally the level of restoration exceeds that in the Faculty. It may be that the nave south wall, and the south transept, were refenestrated shortly before 1889, but most of the work appears contemporary with the addition of the vestry, which is included in the specifications. At any rate, at the close of restoration the church was refenestrated and reroofed, the south door had been rebuilt, and the interior refloored with chambers for a ‘Porritt’s’ stove, and replastered.

The south porch was added in 1928 (NLW, SD/F/505). The blocking of the heating chambers, and the reflooring of the nave, transepts and vestry, may have occurred at the same time.

The softwood pews and the north transept screen  are from 1889. There is a Vowles organ in the vestry. The carved, softwood stalls may be earlier 20th century, as may be the oak pulpit. The neo-Perpendicular oak altar table, with an Agnus Dei motif, is from 1930 (NLW, SD/F/506).

The oolite font has an octagonal bowl with an incised cross, and an octagonal stem and base, from the 14th century (RCAHM, 1917, 214) but retooled.

St David, Meidrim, was a parish church during the post-conquest period (Rees, 1932), of the medieval Deanery of Carmarthen. It appears always to have been a possession of the Bishops of St Davids, valued at £12 in 1291 (Evans, 1993, 13). There was a dependent chapelry at Llanfihangel Abercywyn (ibid.).

In 1998 St David, Meidrim, was a parish church. The living was a vicarage, held with Llanboidy and Merthyr (Benefice no. 691) in the Archdeaconry of Carmarthen, Rural Deanery of St Clears (St Davids, 1997-8).

Evans, J. W., 1993, ‘Meidrim: Some Sidelights on the Church and Parish’, The Carmarthenshire Antiquary Vol. XXIX.