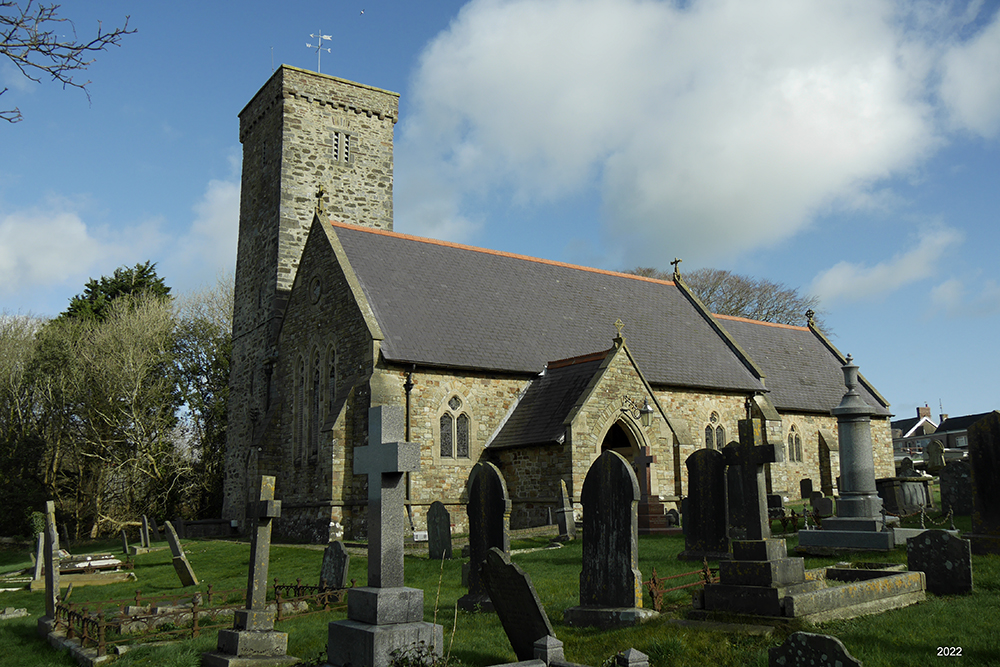 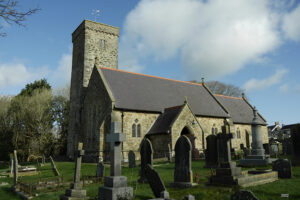 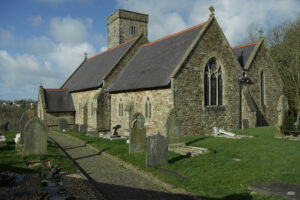 Reasons for Listing: Included for its special architectural interest as a substantial Victorian church with medieval NW tower.

The present church consists of a 2-bayed chancel, a wider 4-bayed nave, a 2 bayed north chapel of the same length and width as the chancel, a 3-bayed north aisle of the same width as the chapel, a 4 storey tower west of the aisle and north of the nave east bay, and a south porch. All except the tower was (re)built in 1867-8. There is also a below-ground boilerhouse against the tower north wall, from 1911.

The medieval construction is in medium-sized limestone and sandstone rubble, unsquared and uncoursed, with crude quoins; fair pointing from the 20th century; internal plaster/render, 1867-8. The 1867-8 facework is roughly squared and coursed sandstone rubble, some limestone, with good 1862-76 pointing and limited 20th century repointing; internal render/plaster, 1867-8. Roofs are slated gables, the nave and north aisle roofed at a higher level; the west tower roof was not seen but is believed to be pyramidal and leaded.

The church was almost entirely rebuilt in 1867-8, not on the existing foundations but to a larger, if similar plan; all floor levels were also raised. The 4-storeyed tower was the only component retained from the medieval church. It occupies a position between the nave west bay north wall and the east end of the north aisle, reflecting its position in the pre-1867 church; it was thus a later component of the pre-1867 church. There was originally no west door. Stylistically, the tower belongs to c.1500; it is slightly tapered but lacks the projecting spiral stair turret, basal batter and string-course characteristic of the region. The spiral stair instead occupies a curved internal projection into the north-west corner and is entered from the ground floor through a doorway with a depressed 2-centred surround from 1867-8 and is lit by simple slit-lights. The ground floor has a depressed 2-centred barrel-vault of c.1500, pierced (secondarily?) for a single bellrope, and opens to the north aisle through an arch reflecting the vault profile. The floor has been raised, but is lower than in the aisle, and is limestone-flagged, pre-1867? re-used?. There is a window in the west wall of 3 cusped lights with Perpendicular tracery in a 2-centred oolite surround and drip-mould, all c.1500; a 2-centred doorway was inserted beneath the window in 1867-8 interrupting its sill. The second and third stages are divided by an external plain granite string-course, c.1500, and are lit by single square loops in the north an west walls. The belfry stage is entered from the stair through a ‘fine early curved arched entrance’ (Nicholas, 1997, 4), not seen 17/1/1998. The east and south walls have 2-light openings with square heads in segmental outer arches, partly rebuilt but with mullions from c.1500; the north and west walls have similar openings but single-light. The parapet lies on a continuous plain corbel table, c.1500, and is not crenellated; much of it was rebuilt in 1876 (Pembs. R. O., HPR/71/8). The tower is in good condition, and has been repointed during the 20th century.

The south-east corner of the tower displays part of the western respond for the medieval arcade between the pre-1867 nave and north aisle, in the form of a chamfered stop of probable 15th century date.

The chancel is all from 1867-8. The east wall is divided from the north chapel east wall by an external stepped buttress. The east window is of 3 cusped lights, with a hexafoil-pierced spandrel beneath a 2-centred surround, in oolite. The 2 south windows is similar, but 2-light and trefoil-pierced; they are separated by a buttress similar to that on the east wall but with a basal batter and string-course. The north wall is a 2-bayed arcade into the north chapel, of moulded 2-centred arches on a cylindrical polychrome pier with a square base and plain capital. The 2-centred chancel arch is moulded. There is a softwood ‘wagon-roof’ ceiling and external weather tabling. The floor is tiled. The altar rail is from 1867-8. The elaborate reredos with a marble frieze is dated 1894. The panelling either side, the altar table, and the free-standing oak-panelled stalls and desks, are later 20th century.

The nave is divided from the north aisle by a 3-bay arcade similar to that between the chancel and chapel, but with octagonal piers; the westernmost stop is medieval (see above). The south wall is pierced by three 2-light windows with trefoil-pierced spandrels, with squared oolite surrounds in 2-centred openings; the eastern 2 are separated by an external buttress like that on the chancel south wall, and there are similar buttresses at all external corners of the nave. The west window is of 3 lancets each with a cusped head and a trefoil above; a quatrefoil opening lights the roof space. The south door has a moulded, 2-centred surround. The ?oak nave roof has collar-rafter trusses, with king- and princess-posts, arch braced from moulded wall-corbels; the exterior has weather tabling.. The passages are tiled, with suspended board floors. The nave is seated with softwood pews; the oolite pulpit may be later than 1867-8.

The north chapel has an external basal batter and string-course. The east wall is pierced by a single cusped lancet, while the north wall exhibits 2 windows and a buttress as in the chancel side wall. The chapel opens to the north aisle through a moulded 2-centred arch similar to the chancel arch. It is roofed in softwood, all common rafters having scissors-braces arch-braced from simple wall-corbels; the exterior has weather tabling. Floored as the chancel?, but beneath superficial floor-boarding. A low softwood screen divides the east bay from the chancel, while the west bay is largely occupied by an organ dated 1874. The altar table, altar rail and credence table are 20th century.

The north aisle has a batter and string-course like the chapel, and is buttressed at the east and west ends like the nave. It is lit by 3 windows in the north wall, the eastern 2 as the chancel south wall windows, the western a single light as in the north chapel. A square, moulded chimney emerges from the western buttress, with a pyramidal cap and smoke-vents. The softwood roof is supported by tie-beams on plain wall-corbels, with crown-posts and a crown-plate, from which the common rafters are braced. Floored and seated as the nave, the west bay with an inserted, enclosed and ceiled vestry from 1978, all in softwood.

The south porch also has a batter and string-course. The doorway has a 2-centred head. The softwood roof is of collared common rafters. The floor-tiles may be re-used from the earlier church, earlier 19th century?.

A shallow-deep external earth-cut cutting runs around the eastern three-quarters of the church, excavated 1867-8 when the church was rebuilt. All floor levels were raised when the church was rebuilt. There are suspended floors in the nave and north aisle. The boilerhouse against the tower north wall is below-ground. No internal crypt/vault is evident. There is no evidence for former components beyond the present church walls. Memorials lie significantly close to the south-west quarter and west walls.

The form of the pre-rebuild church can be reconstructed from the sources. In 1833 it was described by Samuel Lewis as ‘an ancient and venerable structure, in the early style of English architecture’ (see below), ‘and in good repair’, fulsome praise indeed for one of the more dismissive of contemporary commentators (Lewis, 1833). All these factors did not, unfortunately, prevent its demolition and rebuild in 1867. The Faculty submission for the rebuild (NLW, SD/F/564) does, on the other hand, contain a detailed plan of the existing church. It occupied approximately four-fifths of the area of the present church and was very similar in plan, comprising a 2-bayed chancel, a wider 3-bayed nave, a 5-bayed north aisle of the same length as the nave and chancel, a south porch and the present west tower. The tower occupied the same position as at present within the arrangements, ie. it lay at the west end of the north aisle which, however, does not appear to have been a former nave and chancel; the tower partially intruded into the aisle, but projected westwards from it to a far greater degree than at present. The church was only entered from the south. There was a short south transept lit by a 3-light window in the south wall, possibly representing a rood-loft stair bay rather than a transept proper. There was a chancel arch, and a second transverse arch in the centre of the north aisle suggesting the former presence of a north transept, or an extended north chapel. The arcade was of broad, chamfered piers. The church was well fenestrated with 2- and 3-light windows, apparently with stone surrounds and possibly all medieval. It was seated throughout with box-pews, and there was a triple-decker pulpit in the south transept. None of the components extended beyond the present walls, with the exception of the south-east corner of the south porch.

The proposed demolition did arouse contemporary concern, and a member of the Cambrian Archaeological Association called it to public attention; the architectural features were described as 15th century in the account (Anon., 1869, 202-3). However, the demolition and rebuild went ahead, to the plans of Foster & Wood, Architects, of Bristol (NLW, SD/F/564), and for an estimated cost of £1900, a massive sum for the day.

The below-ground boilerhouse against the tower north wall has brick walls, rendered where they rise slightly above yard level. It is entered from the west down a flight of 8 concrete steps to a concrete-lintelled door. The lean-to roof is almost flat, and now with a polymer-resin finish. The heating apparatus may still be present, functional?. The boilerhouse was built in 1911 (NLW, SD/F/565) but the chimney in the adjacent aisle buttress suggests that some form of heating arrangement was present from 1867-8; ‘new stove pipes’ were fitted in 1882 Pembs. R. O., HPR/71/7), while coke was a frequent purchase (Pembs. R. O., HPR/71/8), and probably a free-standing stove is referred to.

The oolite font, with a square scalloped bowl, cylindrical stem and square base, is apparently medieval but has been ‘redressed and spoilt’ (RCAHM, 1925, 298).

At the dissolution Slebech Commandery, and all its appurtenances including the Prendergast rectory, fell to King Henry VIII, and was to remain in royal hands. In 1786 the discharged rectory, of the Archdeaconry of St Davids, had an annual value of £28 (£50) rated in king’s books at £9 14s 9d (ibid.). By 1833 the living was endowed with £200 royal bounty (Lewis, 1833).

In 1998 St David, Prendergast, was a parish church. The living was a rectory, held with Rudbaxton (Benefice 601), in the Archdeaconry of St Davids, Rural Deanery of Daugleddau (St Davids, 1997-8).