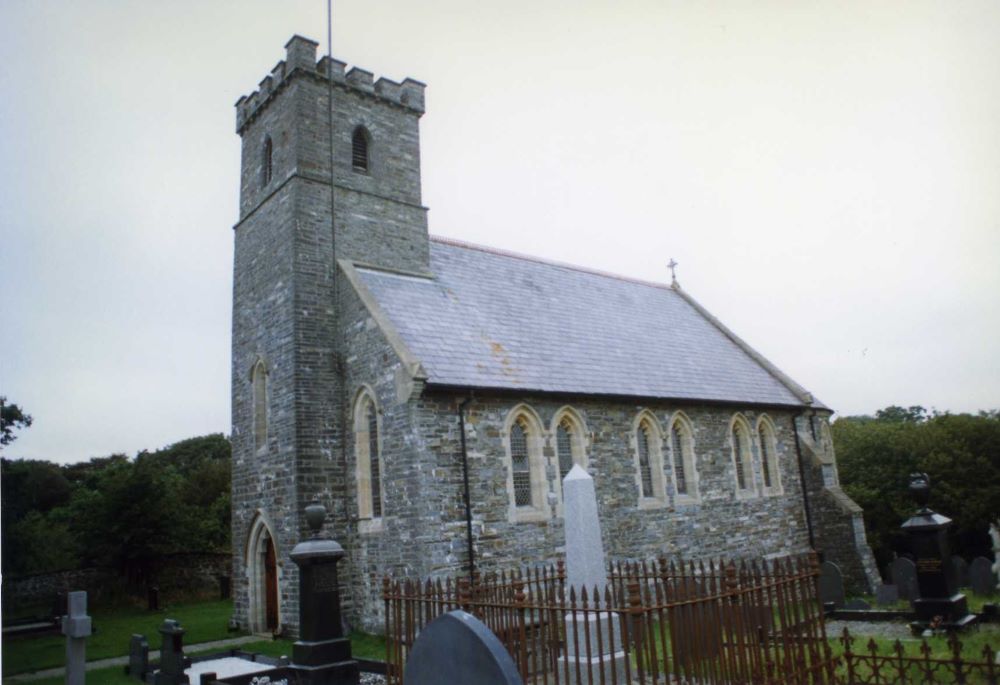 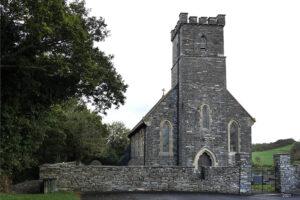 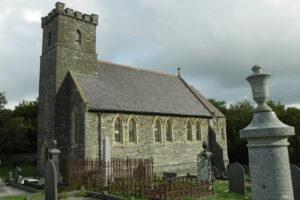 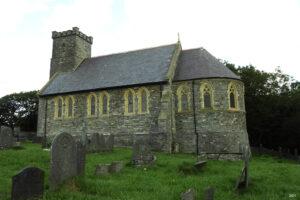 Reasons for Listing: Included for its special architectural interest, particularly the prominent apse above the village, where there are several other listed items.

Archaeological potential – good. no external cutting or drain; below-ground crypt beneath 20% of church; floors suspended over a deep void in 70% of church; external memorials significantly close to 50% of church.

St Deiniol, Llanddeiniol, is a 3-celled church, of small size. It was entirely (re)built in 1835 on the same site, and in the same location as its predecessor, but nothing was retained from the earlier fabric  (Dyfed PRN 12419).

The present church consists of a single-bayed, semicircular apsidal chancel, a 3-bayed nave, and a 3-storeyed west tower and porch. Construction is in local Silurian rubble throughout; external pointing is mainly from 1883, and the interior is plastered. Openings are from 1883 and neogothic, with yellow oolite dressings, the windows comprising cusped single and double lancets; the tower belfry lies on an offset and retains a single lancet in each of its 4 faces, and a crenellated parapet, from 1835. There is limited external buttressing, and a string-course at the east end, all 1883. The chancel is raised over a crypt entered from the yard through a plain doorway at the east end. The nave has a slated gable roof while the slated chancel roof is a half-hip; the tower roof was not seen.

The medieval church survived until 1835, and in 1810 was described as ‘a small ancient building’, comprising a single cell divided into nave and chancel by a double timber screen ‘like that at Llangeitho’. The screen still bore paintwork, and featured depressed  2-centred arches with a gallery over, which carried heraldic devices (Crossley and Ridgeway, 1946, 51). The chancel was in disrepair in 1766, as was the ‘stone bench in the church’ (Evans, 1918, 134). The thatched roof was replaced with ‘tiles’ in 1785 (ibid.). A new window was inserted in the north wall in 1806, and the church was reseated and the pulpit replaced (ibid.).

The church appears to have been entirely rebuilt in 1835 (ibid.), in the ‘Estate Chapel’ style. The new church is shown in drawings of 1881 (SD/F/294) and consisted of the present nave and west tower, but had a small, square, single-bayed chancel. The building was tall and very similar in style to the surviving church, of c.1840, at Eglwys-fach, Cer, and may have been designed by the same architect. The nave was lit by 3 tall, ‘Y’-traceried windows in the north and south walls, and the chancel floor appears to have been raised over a crypt.

It was restored in 1883 with significant alterations, to the designs of the architects Middleton & Son of Westminster and Cheltenham (ibid.). The nave and tower were retained, but all their openings, except in the tower belfry, were rebuilt The chancel was demolished and replaced with the present apse, over a crypt rebuilt ‘for biers’. The church was reroofed and refloored.

The font has an octagonal bowl and a cylindrical stem, 13th – 14th century?.

There is a neither an external cutting nor a drain. Floors are suspended over a deep void in the nave, and a deep crypt lies beneath the chancel. External memorials lie significantly close to the north and east walls.

St Deiniol, Llanddeiniol, was a parish church during the medieval period (Rees, 1932), of the medieval Deanery of Ultra-Aeron. It was a possession of St Davids as a prebend of the collegiate church at Llanddewi Brefi, rated in the king’s books at £4 (Lewis, 1833). The patronage later fell into private hands.

In 1833 the living, a perpetual curacy in the patronage of the Price family of Knighton, was endowed with £1000 royal bounty (ibid.).

In 1998 St Deiniol, Llanddeiniol, was a parish church. The living was a vicarage, held with Llanychaearn (Benefice no. 689) in the Archdeaconry of Cardigan, Rural Deanery of  Llanbadarn Fawr (St Davids, 1997-8).

The church was more commonly known as ‘Carrog Church’ until the present century.