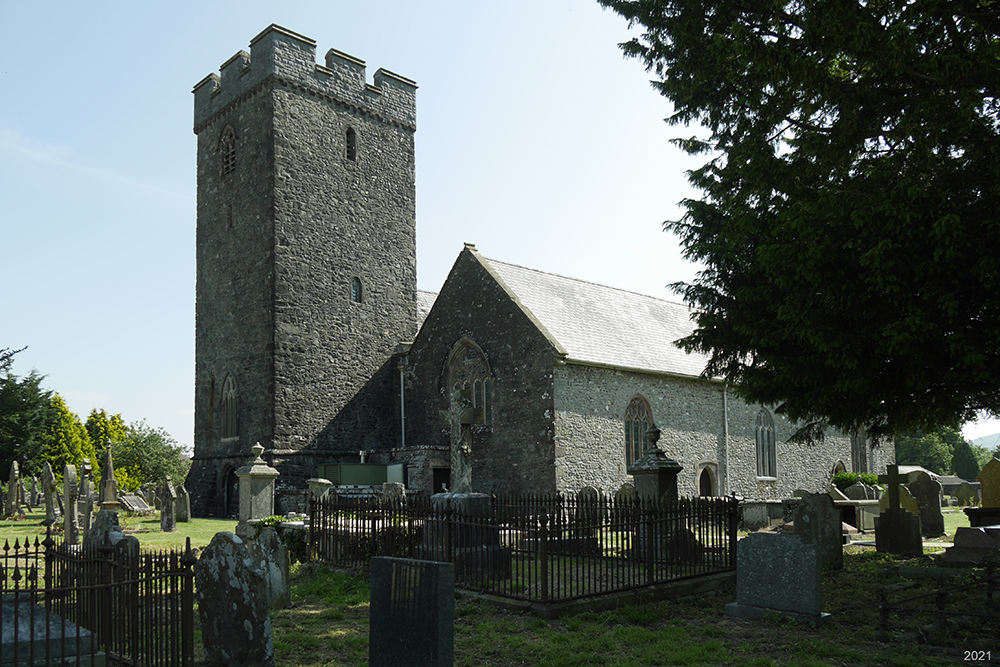 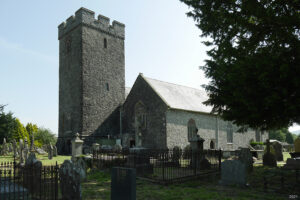 The present church consists of a single-bayed chancel, a 3-bayed nave, a single-bayed south chapel, a 3-bayed south aisle, a north porch, a 3-storeyed west tower and a heating chamber in the angle between the tower and the aisle. Construction is in local mixed rubble, predominantly limestone. There are medieval openings including window tracery, in sandstone, limestone and oolite and largely Perpendicular; other dressings are in yellow oolite, neo-Perpendicular, from the late 19th century and 1906-7 but more-or-less replicating the original dressings. Pointing is mainly from the later 20th century. The interior, except for the porch, is roughcast, from 1991. Roofs are slated gables; the storehouse has a flat roof and the tower roof was not seen.

The chancel is the same width as the nave. It has an external basal batter and squared medieval quoins. The east gable was rebuilt in small limestone rubble, probably in 1906-7 with a contemporary single, cusped lancet. The 3-light east window has a 2-centred surround and Perpendicular tracery from the late 15th century, partly rebuilt in both the late 19th century and in 1906-7 when the rear-arch was rebuilt. The north wall is pierced by a cusped 2-light window with sunk spandrels, in a square surround of sandstone; 15th century, but similarly partly rebuilt. The 2-centred chancel arch is chamfered and has plain chamfered imposts, probably all from the 14th century; a corbel on the west side of the northern stop is probably associated with a former rood-screen. The softwood roof has king- and princess-posts on tie-beams, frame-and-matchboard ‘ceiling’ above, from 1906-7. Internally, corbels for earlier (medieval?) roof timbers survive beneath the summits of the east, north and south walls. The flagged floor is mid-late 19th century; the sanctuary was tiled in 1906-7.

The nave lacks an external batter, but the north wall leans out towards the top and features 3 stepped buttresses added in the later 19th century, rebuilt in 1906-7. At the east end of the wall lies a single plain lancet with a chamfered sandstone surround, low down, probably associated with the rood-screen or stair, and possibly also 14th century. The 3 main windows have large, 2-centred embrasures, probably original and of late 15th century date, each containing 3 lights with Perpendicular tracery, in yellow oolite, from 1906-7. The north door has a 2-centred surround, with infill, all from the late 19th century. The west wall is quoined. Internally, the north wall east bay exhibits a plain, square aumbry in chamfered limestone, 14th century?, with an Old Red Sandstone lintel from ?1906-7. The nave roof has oak tie-beams with king- and princess-posts from c.1700, and ?later carved arch-braces; the purlins, common rafters and matchboarding are from 1906-7. The passages are flagged as the chancel floor; the former suspended floor voids have a later 20th century concrete fill, with a damp course inserted in 1991 (churchwarden, pers. comm.).

The south chapel communicates with the chancel through a double-chamfered 2-centred arch on semi-octagonal stops with plain imposts and bases. The external walls are quoined, but not battered. The east window has a large, 2-centred embrasure from the late 15th century and 3 lights with Perpendicular tracery like the nave windows, but in limestone, also from 1906-7?; surrounding infill is visible. The south wall is pierced by a similar window but the tracery is in double chamfered Old Red Sandstone all from the late 15th century; to the west is a rebuilt ‘priest’s’ door with a 2-centred surround in roll- and cavetto-moulded Old Red Sandstone, and a drip-mould, from 1906-7 but possibly in imitation of the late 15th century original (see below). There is a small, plain, square internal recess in the south wall, (re)built in the 20th century. The softwood roof is matchboarded and framed like that in the chancel, but without the trusses, and also from 1906-7. The floor is concealed beneath a later 20th century suspended board floor.

The south aisle communicates with the chapel through a 2-centred, double-chamfered arch with single chamfered stops with neither imposts nor bases, all late 15th century. It communicates with the nave through a 3-bayed arcade of double-chamfered 2-centred arches on octagonal piers with plain imposts and bases, in oolite ashlar from the later 19th century in imitation of the arch between the chancel and the chapel. It is lit by 2 windows in the south wall, like the chapel east window and similarly from the late 15th century. The south door has a similar surround to the ‘priest’s’ door and also rebuilt in 1906-7 but with a segmental head. Internally, the east end of the south wall exhibits a recess with a depressed segmental head, medieval, function?, blocked window associated with extension of rood-screen? (but no blocking visible externally); it has a limestone shelf inserted in 1906-7. The west wall features a large, 4-light window with a 2-centred surround and drip-mould and Perpendicular tracery of multiple cavetto mouldings, in Old Red Sandstone possibly predating the 1906-7 restoration. To the north is a blocked doorway, at half-height, with a segmental head and infill from the mid-late 19th century, blocked in 1906-7 and representing the entry to a former stair turret (see below); it is associated with a corbel of similar function. To the south of the window is a blocked doorway at ground level, again from the mid-late 19th century and blocked in 1906-7. The northern half of the wall is now occupied by a plain, square opening, with a grating, into the heating chamber, from 1906-7. The aisle is roofed and floored as the nave.

The north porch was entirely rebuilt in the later 19th century in roughly squared and coursed limestone rubble, and was restored in 1906-7. The side walls incorporate two contemporary buttresses against the nave north wall, and all external walls have a plain basal offset and a moulded yellow oolite string-course. The doorway has a 2-centred surround in chamfered Old Red Sandstone; above it is a blind lancet. The side walls are pierced by single trefoil lights in yellow oolite. The softwood roof has scissors-braced rafters and matchboarding from 1906-7. The floor is flagged as the nave, directly onto the substrate.

The heating chamber in the angle between the tower and the south aisle west wall is originally from 1906-7, replacing one from the late 19th century. The entry is in the south wall, and has a square surround in cavetto-moulded Old Red Sandstone. The east bay rises above the west bay, which was added in the later 20th century, with a stepped buttress on the south wall at the junction; the west bay is low. There is a flat roof throughout, with an oil tank overlying the west bay. The floor may be below-ground.

A very shallow external drain runs around the north walls and the chancel east wall. Floors were suspended over a void in the nave and aisle. The heating chamber floor may be below-ground. Few external memorials lie significantly close to the north and south walls.

The nave contains an opening that may be 14th century, contemporary with the chancel arch. The chancel itself was rebuilt, with a batter, possibly in the earlier 15th century, but the rebuild stops short of the west end. There is a joint between the chancel and the south chapel; the latter is stylistically late Perpendicular, contemporary with the south aisle and probably contemporary with the west tower (and the original north porch?). In 1484 Richard III gave 10 marks towards repairing the church and that at Llanfair-ar-y-Bryn (Caröe, 1917, 21; RCAHM, 1917, 97), which expenditure may very well represent this late 15th century remodelling. The whole plan-form is that of the ‘typical’ North-east Carmarthenshire church as fully developed at the end of the medieval period. The south aisle was traditionally known as the ‘parish chancel’  (Evens, 1921 (i), 5).

The church was described by Lewis, in 1833, as ‘an ancient building, consisting of two spacious aisles, with a tower, but presents no interesting architectural details’ (Lewis, 1833). In a description of the church of 1851 (Glynne, 1898, 360-361) ‘the windows on the north side are mostly modern, those on the south square-headed and rather poor; the east window of the chancel square-headed and small, of 3 lights; the north portion very large and plain’. The doors were ‘pointed and simple’. Over the north porch, which featured a stoup, was a parvis, ‘lighted by a slit’; the porch was very large, shown on the tithe map of 1839 as a transeptal building (NLW, Llandingat, 1839). The church exterior was whitewashed. An organ lay in its present location. The font was ‘modern’.

The architect W. D. Caröe described the church at some length in 1904 prior to its restoration (Caröe, 1914, 15-16). It had been subject to ‘unscholarly, tasteless and injudicious restorations’. The north porch was ‘entirely modern’, and had replaced the large porch with a parvis described by Glynne. The nave arcade too was ‘entirely modern’, and was ‘a bad copy’ of the surviving 15th century arch between the chancel and the south chapel; the arch between the chapel and the south aisle was also medieval. The northern windows were rather poor copies of the originals, and the north wall had recently been buttressed. The central windows of the south aisle were similarly ‘very bad copies’. Both the south door and ‘priest’s door’ were blocked. The oak roof over the nave was attributed to c.1700 replacing a lower-pitched roof of ‘Tudor’ date, ‘when a clerestory may have been added’. The chancel roof was ‘modern’, and raised from its original line, while the south aisle roof was inaccessible (ceiled?); these roofs dated from 1867 as recorded on a plaque in the aisle. The tower parapet, and belfry lights, were similarly ‘modern’. A photograph of c.1900, taken from the west (reproduced in Parry and Roberts, 1909, 157), shows a west door into the south aisle, south of the west window; both door and window were ‘quite modern’ (Caröe, op. cit.) and have been rebuilt/blocked. In addition, a low, semi-octagonal stair turret, with square quoins and pyramidal roof, of mid-late 19th century date and leading to a western gallery (ibid.), is shown; it was in poor condition by 1904 and are now gone. A heating chamber occupied the same location  as the present building; it had a lean-to roof up to the tower but was also in poor condition.

Caröe restored the church in 1906-7 (RCAHM, 1917, 97). Many of the windows were rebuilt. The removal of ‘thick coats of modern plaster’ revealed ‘the approach to the rood-loft, the Priest’s door, and the south door, all of which were obliterated’; the doorways were unblocked and rebuilt (Evans, 1907, 182). The western gallery and stair were removed, and the aisle west door was blocked. The north porch and buttresses were partly rebuilt, as was the tower parapet and the belfry openings. The heating chamber was entirely rebuilt. The chancel, south chapel and south aisle were reroofed. The church was refloored, and replastered.

The interior was roughcast, and damp courses were inserted beneath the nave and aisle floors, in 1991 (churchwarden, pers. comm.).

A former possible large, circular outer enclosure may be associated with the church (Sambrook and Page, 1995(i), 8).

St Dingat, Llandingat, was a parish church during the post-conquest period (Rees, 1932), of the medieval Deanery of Stradtowy. It appears to have always been a possession of the Bishops of St Davids.

In 1833 the living was a vicarage, with the perpetual curacy of Llanfair-ar-y-Bryn annexed, in the patronage of the Bishop and rated in the king’s books at £7 (Lewis, 1833).

In 1998 St Dingat, Llandingat, was a parish church. The living was a vicarage, held with Myddfai (Benefice no. 530) in the Archdeaconry of Carmarthen, Rural Deanery of Llangadog and Llandeilo (St Davids, 1997-8).