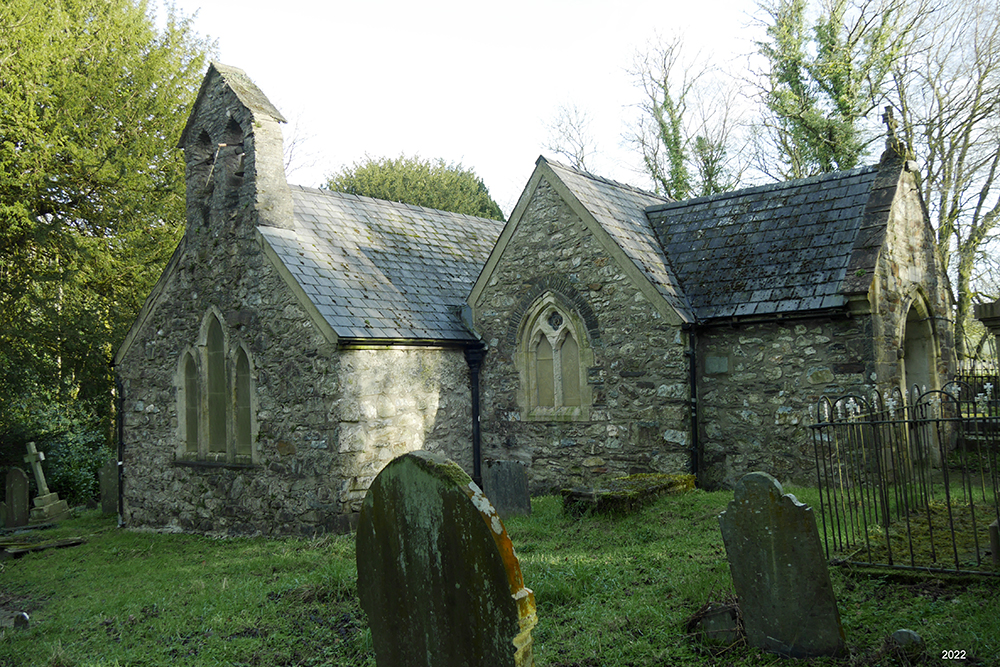 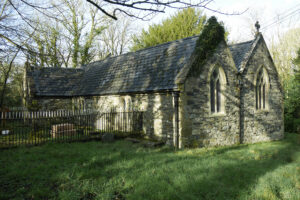 The present church consists of a 2-bayed chancel, a 3-bayed nave, a 4-bayed south aisle and a south porch. Construction is in limestone and slate rubble; the chancel and south aisle east wall were refaced with squared quoins in c.1878. The chancel arch, the south aisle arcade and mouldings, the western double bellcote, the south door, window embrasure(s) and a tomb recess are medieval. Other openings were rebuilt in c.1878, in neo-Gothic style, with yellow oolite dressings. There are some remains of late 18th-early 19th century external render; pointing is mainly from c.1878, with fair later 20th century repointing, and the interior is plastered. Roofs are slated gables.

There are 2 good 18th century monuments.

The chancel was largely refaced in roughly coursed limestone and slate rubble in c.1878. The 3-light east window has cusped, curvilinear tracery in a 2-centred surround with a drip-mould on medallion stops, all in chamfered yellow oolite from c.1878. A window in the west bay north wall is also from c.1878 and features 2 cusped, ogival lights in a square surround of chamfered yellow oolite. The low, plain 2-centred chancel arch, with square stops and offsets at springer level, is medieval, probably from the late 13th – 14th century. The softwood, queen-post roof is from c.1878 with arch-braces from contemporary wall-corbels. The floor is carpeted but is probably tiled throughout like the sanctuary, from c.1878.

The nave east wall features a substantial basal ‘plinth’, while the north wall has a considerable external batter; both features are medieval as is the random facework. The nave is lit by 2 windows in the north wall, both comprising 2 plain lights with independent 2-centred surrounds of chamfered yellow oolite, from c.1878 with infill; that in the east bay lies beneath an earlier outer arch that may be medieval. Internally, the north wall exhibits a chamfered offset at sill level, medieval?, function?. The west bay is defined by an external vertical joint, and is in larger limestone rubble than the rest of the nave; it may represent an extension added when the south aisle was built in c.1500 (see Structural Development below). The west bay south wall retains some late 18th-early 19th century external render, while the west (gable) wall is pierced by a window like those in the north wall, from c.1878 with infill, but with 3 lights. A gabled, double bellcote, medieval, from c.1500?, lies on the west wall; it has simple limestone coping and the openings have plain, 2-centred heads. The softwood nave roof is from c.1878 and like that in the chancel but without the wall-corbels. The quarry-tiled floor, with limestone-flagged passages, is also from c.1878 and without an underfloor void.

The south aisle communicates with the chancel via a 2-bayed arcade of cavetto-moulded, 4-centred arches, from c.1500. The eastern stop is deeply chamfered, features a capital with moulded grotesques, possibly re-used, and the base is concealed beneath chancel floor level; the western stop is similar but without the grotesque, while the central pier is cylindrical, with a chamfer-moulded capital featuring moulded shields, one of which bears a St Andrew’s Cross, and a concealed base. The 2-bayed arcade from the nave is similar, but without the mouldings; the central pier instead features a cable-moulded capital on a plain base. The aisle east wall was refaced in c.1878 like the chancel; a very large stone beneath the south-east corner represents part of the medieval footings. The aisle is lit by a window in the east wall, like the chancel east window and similarly from c.1878 but 2-light. There are 2 windows in the south wall, both from c.1878 with 2 uncusped lights in square surrounds, with sunk spandrels, of cavetto-moulded yellow oolite. A fourth window in the west, gable wall has 2 cusped lights with a central quatrefoil, in a 2-centred surround and a drip-mould like that on the chancel east window, in chamfered yellow oolite from c.1878 that is in very poor condition, badly weathered; the 2-centred embrasure may be medieval. The plain south door is from c.1500 and has a rounded, 4-centred head. Internally, the east bay south wall features an empty tomb recess with a plain, depressed segmental head and plain square stops, from c.1500; the recess and the arcade mouldings suggest that the east bays were intended as a mortuary chapel. The softwood roof is like that in the nave and similarly from c.1878. Floored as the nave.

Shallow, concreted external drains run along the east and west walls of the church. Internal floor level has been raised in the chancel. Floors are not suspended and there are no underfloor voids. Burials probably lie beneath the south aisle east bay. External memorials lie significantly close to east, west and south walls of the church.

The nave and chancel cannot be closely dated but the chancel arch may be late 13th – 14th century. The arcade and detail provide a date of c.1500 for the addition of the south aisle; the nave west bay is defined by an external vertical joint, and of a different build from the rest of the nave, and it may represent an extension added, with the present bellcote?, when the south aisle was built. The south porch is 19th century.

The church was described by Fenton in 1810 as consisting of a chancel, nave and south aisle; at the east end of the latter was a ‘plain stone canopy which I presume might have once covered an effigy, probably that of Sir Richard Symond, a recorded benefactor…’ (Fenton, 1903, 186). There was also a memorial slab, with a cross fleury, in the aisle floor (ibid.). Fenton noted that it was ‘kept with great neatness, and most charmingly situated’. No south porch is mentioned, and a porch does not appear to be depicted on the tithe map of 1846 which is, however, vague (NLW, St Dogwells, 1846).

The church was restored in 1872 according to Jones, 1997, 1, but Evans, 1917, 8 gives the date as 1878. Neither the details of the restoration, nor the architect responsible, are known. The chancel and south aisle east wall were refaced, with squared quoins. The church was refenestrated, reroofed, refloored, replastered and reseated. The south porch was added.

The limestone font has a square, scalloped bowl and a cylindrical stem from c.1200; the square base is from the 19th-20th century.

There are 2 bells in the bellcote.

The tithes were leased to Thomas Edwards of St Davids in 1580 (ibid.), and to John Edwards in 1717 and 1731. The rectorial tithes were, by 1810, held by the Chapter of St Davids ((Fenton, 1903, 186), who also held the manor of St Dogwells which had been granted to them by Richard Symond, Knight, in 1329 for the maintenance of two priests in the cathedral to say mass for his soul and that of Eleanor, his wife (ibid.).

In 1998 St Dogfael, St Dogwells, was a parish church. The living was a vicarage, held with Spittal, Trefgarn and Ambleston (Benefice 819) in the Archdeaconry of St Davids, Rural Deanery of Daugleddau (St Davids, 1997-8).