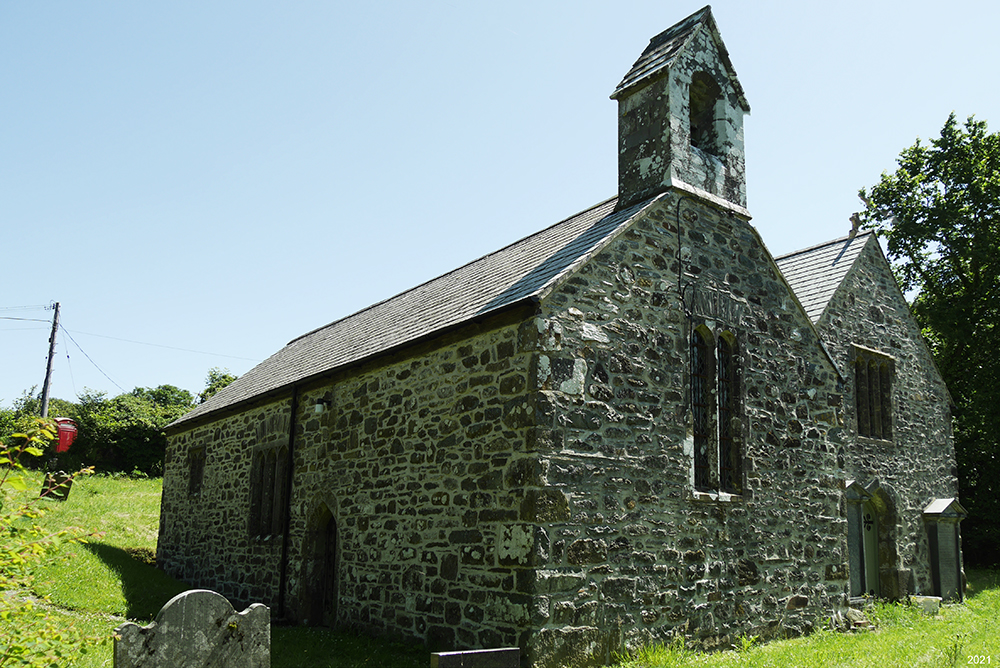 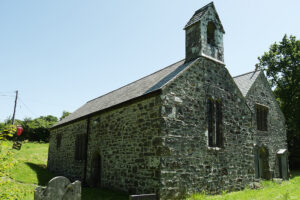 Reasons for Listing: Included for its special historic interest as a substantially medieval double-nave church.

The present church consists of a 3-bayed chancel/nave (formerly the south aisle) and a longer, 3-bayed north aisle (formerly the chancel/nave), which extends beyond the chancel/nave west wall. Construction is in limestone rubble throughout, unsquared and uncoursed, with medieval quoins. The external pointing is generally good and is of 1889; the east and walls were repointed c.1988. All internal walls are rendered/plastered, some of which is fair only. Both cells have slated gable roofs.

The northern cell (now the north aisle) appears to be the earlier of the two components; it is not possible to date closely but it may be 14th century, the door in its north wall being medieval and possibly this early. The southern cell (now the chancel/nave) was added c.1500 – the 3-bay arcade between the two cells comprising 2-centred arches on octagonal piers, of good quality but without bases or capitals and rather asymmetrical, is stylistically of this date, while the door in the west wall differs somewhat from the north door and appears later medieval. There is no chancel arch in either cell, both of which were always roofed continuously at similar levels. No medieval windows survive but in the northern cell, the north wall west window and west wall window both lie beneath segmental outer arches that may be medieval. Brackets/corbels on the interior of the north cell east wall may also be medieval – for statuary? or altar rail? There is a single bellcote on the northern cell west wall, (re)built in 1889, but the medieval church presumably featured a bellcote.

A deep earth-cut cutting runs around the eastern half of the church, exposing the southern cell footings, and thus post-dating its construction; the northern cell footings are not exposed and there appears to have been a cutting here from the first. There is no cutting or drain around the western half of the church. The flooring is suspended throughout. There is no evidence for any below-ground crypt/vault within the church. In the absence of pier bases within the arcade, evidence for floor level changes is lacking.

The extent of any 18th-early 19th century work at the church is unknown; it may be assumed that at least some sash windows – standard for the time – were introduced. In 1833 the church was described as ‘not remarkable for any architectural details’ (Lewis, 1833).

A Faculty was applied for restoration in 1888 (NLW, SD/F/508), following specifications by the architect Charles Baker King, of London. Large-scale alterations were proposed, including the construction of an entirely new chancel east of the south aisle. Most of the windows were to be replaced, but the north and west doors were to be retained. The Faculty was not granted.

The church was however restored in 1889 (RCAHM, 1925, 244), but the work was fairly low-impact and no components were removed or added. The two medieval doorways were retained unchanged; however the church was entirely refenestrated with 2- and 3-light, square-headed, neo-perpendicular windows with oolite surrounds. Entirely new softwood roofs were put on both cells, a king-post roof in the northern cell and a collar-rafter roof in the southern; there are, however, no upstands or weather tabling. The interior was replastered but the extent of removal of the old is unknown. It may have been at this period that the chancel was established in the southern cell, with a polychrome tiled floor; the remainder of the floors were given plain-tiled passages and suspended boarded floors beneath the new seating. The bellcote was rebuilt as a simple, square, gabled structure with a single opening and bell. Most fittings, except the font, are from this restoration, and include the altar rail, pulpit and desk.

The church was closed for some years prior to 1988, when local pressure and fund-raising led to its reopening (Pembs. R. O., HDX/1414/12). Repairs were generally minor – the bellcote, the east walls and the north wall were repointed, some slates, flashings and gutters were replaced, and the church was rewired and redecorated. Most of the fittings had been retained (ibid.).

The plain font is medieval, with a square bowl and stem, and octagonal base, all probably 13th-14th century.

The church was not listed in 1998, but was a Building of Special Historical or Architectural Interest; in PCNP.

Mynachlogddu was not a medieval parish church (Rees, 1932). The benefice was originally a curacy belonging to St Dogmaels Abbey, as a grange chapel (Green, 1913, 209). In 1291, as ‘Capella de Nigra Grangea’, it was assessed at £2 13s 4d (ibid.). It was not separately assessed in the ‘Valor’ of 1536, described instead, within a list of St Dogmaels properties, as the free chapel of ‘Manoghloke Duy’ (ibid.).

There is evidence that the church was formerly dedicated to St Giles. George Owen of Henllys, writing in the late 16th century, called it ‘Mynachlog ddu, otherwise St Giles Chapel in Prysely’ (Wade-Evans, 1935, 132-3). The present dedication to St Dogmael may be a result of its former connection with that abbey.

At the dissolution the advowson was first leased, and then purchased by private individuals (ibid.). The church became the parish church of Mynachlogddu.

The church was closed for some years prior to 1988. In 1998 St Dogmael, Mynachlogddu, was a parish church. The living was a vicarage, held with Maenclochog, Llandeilo Llwydarth, Henry’s Moat, Llangolman, New Moat and Llys-y-fran (Benefice 831) in the Archdeaconry of St Davids, Rural Deanery of Daugleddau (St Davids, 1997-8).