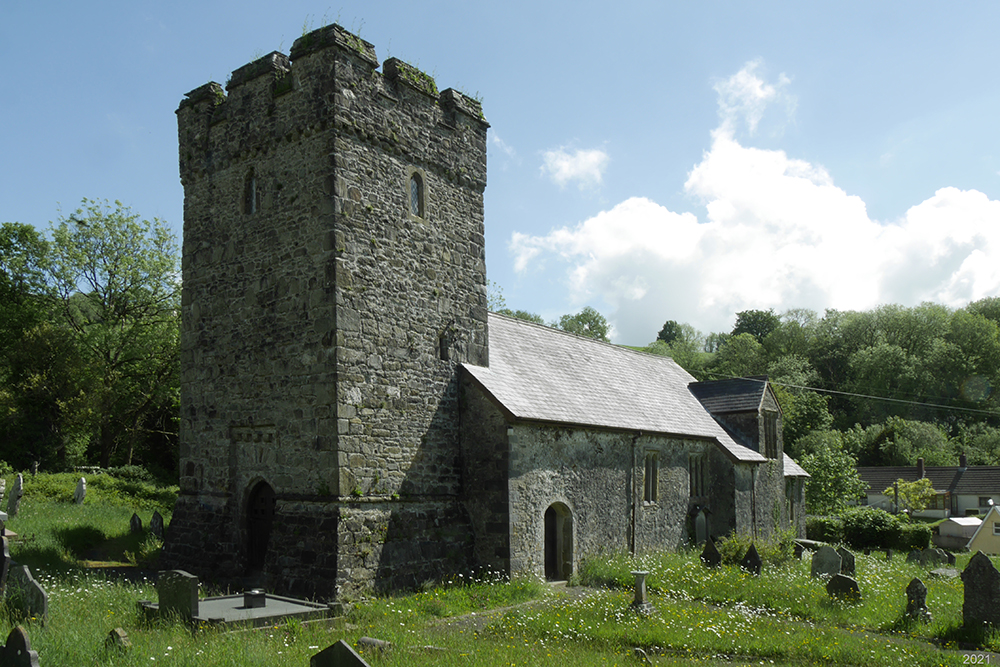 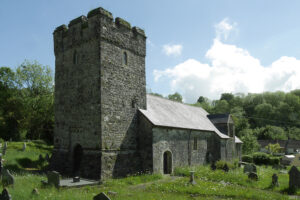 The present church consists of a 2-bayed chancel, a 4-bayed nave, a 5-bayed north aisle, and a 3-storeyed west tower. Construction is mainly in limestone rubble. Openings are largely either from the early 17th century or are 1861 copies replicating the original dressings, both in yellow oolite. There are extensive remains of 18th – early 19th century external render, with some 1861 and 20th century repointing; the interior is plastered. Roofs are slated gables; the tower roof was not seen.

The chancel east window is entirely from 1861, with a segmental head and infill, but imitates an early 17th century original; it has 3 semicircular-headed lights, with sunk spandrels, in a square surround and cavetto-moulded label. The east bay south wall is pierced by a single ogee-headed lancet, with infill, from 1861. To the west is a blocked medieval window with a 2-centred head, ?associated with a moulded human mask corbel at springer level; the blocking lies below the 18th – early 19th century render . Further west is a third area of blocking or refacing, above the render, from 1861?; there appears to be an irregular vertical joint along its eastern edge, date?, function?. The plain, 2-centred chancel arch may date from c.1500, like the squint, with a chamfered square surround, that lies to the south. The softwood roof is from 1861. The tiled floor is also from 1861.

The nave east bay is thrown out from the south wall as a shallow, square gabled projection, with very large quoins, inserted in the early 17th century for the rood-loft and stair (cf. Myddfai, Carms.). The top of the gable has been rebuilt, in the early 20th century?; it is lit by a 3-light window like that in the chancel east wall, but in yellow oolite and from the early 17th century. Below the window is a blocked window, the jambs and sill of which are visible externally and probably also early 17th century, with a large, segmental-headed embrasure. The western half of the projection is a downwards continuation of the gable and houses the rood-stair, which is entered from the nave through a doorway with a 4-centred surround from the early 17th century; the upper door to the loft was blocked with brickwork in 1861. The nave south wall proper is pierced by 2 windows like that in the gablet but without dripmoulds, from the early 17th century; that to the west has only 2 lights and was rebuilt, with infill, in 1861. To the west, a segmental arch is visible in the external face but is not associated with any visible blocking. The south door has a semicircular-headed surround in chamfered limestone that is probably earlier than the windows, from c.1500. The south-west corner of the nave was rebuilt in the later 20th century in limestone ashlar. Roofed as the chancel. The passages are tiled over heating ducts, with suspended board floors; it lies at a higher level than the chancel floor below nave floor probably due to the presence below of post-Reformation burials.

The north aisle communicates with the chancel through a wide, low-headed plain segmental arch; the arcade into the nave consists of 4 chamfered, 2-centred arches on chamfered square piers, the eastern stop of which is wide, and is pierced by small doorway that now leads onto the pulpit but may formerly have been associated with the rood-screen. Both the eastern arch and the arcade are from c.1500. The aisle east wall window is like that in the chancel east wall but all in yellow oolite from the early 17th century, in poor condition. A flight of 8 steps in a revetted well leads down the east wall to a below-ground heating chamber entered through a doorway with a plain, segmental head from c.1900; the flue rises through the thickness of the north-east corner to emerge as a square, yellow-brick chimney from c.1900. The north wall has an external basal batter and is pierced by 3 early 17th century windows similar to that in the east wall, and in similar condition, but without dripmoulds; the western two are 2-light. The west wall features a similar, 3-light window but entirely from 1861, also in yellow oolite but cruder, with surrounding infill. The oak wagon-roof principals are from c.1500 but some of the framing was replaced in 1861. Floored as the nave. The east bay is separated from the remainder by a lath and plaster screen wall, to form a vestry.

The 3-storeyed west tower contains some Old Red Sandstone rubble. It is early, from c.1400 and is of late Decorated character, but features the external batter up to a string-course typical of the region. The spiral stair is squinched, above ground level, from the eastern half of the north wall and the aisle west wall (cf. Llangathen), and continues upward with a corbel-table at half-height; the stair is entered from the nave through a doorway with a 2-centred head, c.1400, and lit by simple slit-lights. The ground floor communicates with the nave through a double wave-moulded 2-centred arch, with a plain imposts, from c.1400; the 2-centred west door occupies a corbel-headed cut-out and has a similarly moulded surround beneath a segmental outer arch. Internally, a cusped stoup from c.1400 lies in the south wall. The interior is barrel-vaulted, from c.1400. Floored as the nave and aisle. The second storey is lit by a slit light in the south wall, with a yellow oolite surround, also from c.1400. The belfry stage has single-light openings with cusped, rounded 2-centred heads and surrounds in all 4 faces, in yellow oolite and from c.1400; those in the north and south faces have been rebuilt. The crenellated parapet lies on a corbel table, from c.1400.

There is neither an external cutting nor drain, but the tower footings have been exposed. The nave floor has been raised by the action of post-Reformation burial beneath. Floors are suspended over heating flues in the nave and aisle. There is a below-ground heating chamber beneath the aisle east bay. External memorials lie significantly close to the chancel south wall.

The tower can be dated, by its dressings, to c.1400 and may be the earliest part of the present church; it has a spiral stair turret like that at Llangathen, Carms., of similar date. The chancel and nave cannot be closely dated, but contain a squint from c.1500 and the two may have been rebuilt when the north aisle was built in c.1500, with its surviving contemporary roof. The overall plan-form is that of the ‘typical’ North-east Carmarthenshire church as fully developed at the end of the medieval period.

The church was extensively refenestrated when the rood-loft stair projection was added in the early 17th century; the latter may be ‘Laudian’ in concept, cf. the similar recess at Myddfai, Carms.. Considerable evidence of fire damage was apparently noticed in 1861, which may provide a context for this work (Williams, 1915, 4).

The restoration of 1861 (Williams, 1915, 4, et al.) was very slight. Some windows were replaced with copies of the originals. The nave and chancel were reroofed, and the church was refloored and reseated. The rood-loft stair was blocked and the interior was replastered; the stair lower door was still blocked in 1917 (RCAHM, 1917, 140).

The heating chamber was probably inserted beneath the aisle east bay c.1900, but has now been replaced by a free-standing boiler in the aisle. There have been some later 20th century repairs, including to the south-west corner of the nave.

St Egwad, Llanfynydd, was a parish church during the post-conquest period (Rees, 1932), of the medieval Deanery of Stradtowy. It was a possession of the Bishop of St Davids as a prebend of the collegiate church at Abergwili, annexed by the Precentor in 1331 (Jones, 1963, 185).

In 1998 St Egwad, Llanfynydd, was a parish church. The living was a vicarage, held with Llanegwad (Benefice no. 677) in the Archdeaconry of Carmarthen, Rural Deanery of Llangadog and Llandeilo (St Davids, 1997-8).

The dedication is given as St John on the first and second edition Ordnance Survey maps, but St Egwad is given by Lewis, 1833.