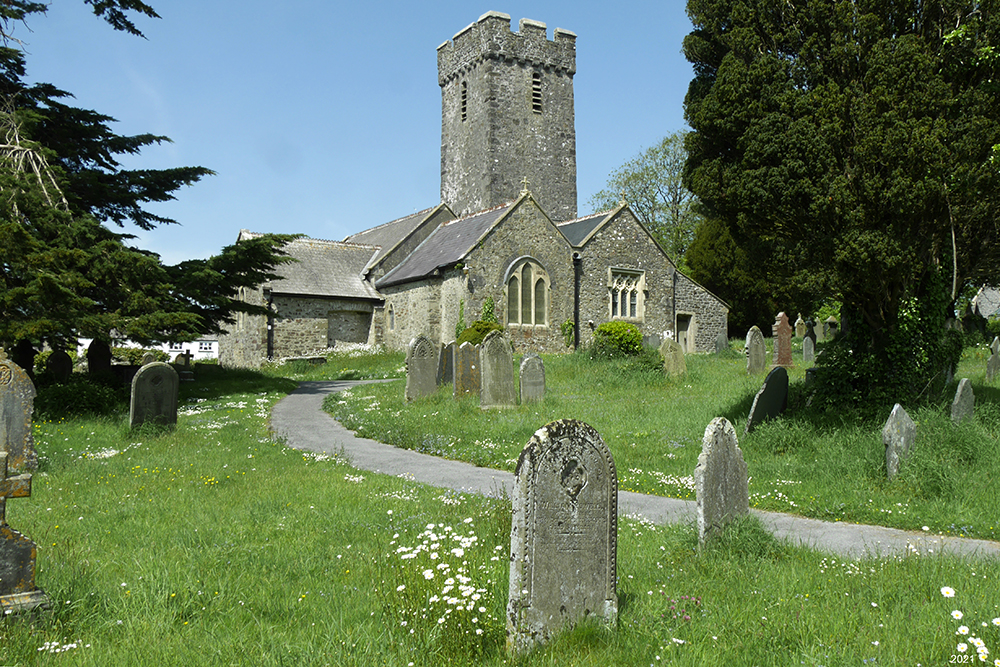 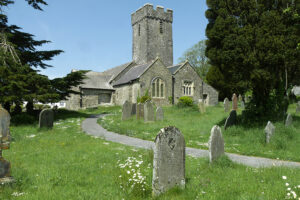 Reason for Listing: Listed as a largely medieval vaulted church of unusual plan preserved in an unassertive C19 restoration.

The present church is cruciform and consists of a 2-bayed chancel, a 4-bayed nave (originally 2-bayed), a 2-bayed north chapel, a north transeptal 3-storeyed tower, a single-bayed south transept, a 2-bayed vestry north of the north chapel, and a south porch. Former south chapel or skew passage. Construction is in limestone rubble; pointing is mainly from 1851-55 and 1899 but there is some poor 20th century repointing, and the interior is plastered. The interior is barrel-vaulted throughout except in the chancel, north chapel and south porch. The transept arches are medieval, and the tower has retained some medieval openings, including tracery; other openings, including the chancel arch, are mainly from 1851-55, in grey oolite and Early English in style, or from 1899, in yellow oolite and neo-Perpendicular. Roofs are slated gables; the vestry has a slated lean-to roof and the tower roof was not seen.

There are a number of 18th century memorials.

The chancel weeps slightly. The east wall, and the south wall of the east bay, were rebuilt in small rubble c.1600 (see Structural Development below); the east wall exhibits a joint with the south-east corner of the north chapel east wall. The east window is from 1851-55 and comprises 3 uncusped, graduated lancets beneath a plain dripmould, all in chamfered grey oolite from 1851-5. The west bay represents the extent of the pre-c.1600 chancel and the south wall is thicker here, separated from the east bay south wall by a vertical offset and joint. This thicker section features an internal recess with a segmental head, which represents the archway into a former south chapel or skew-passage, probably from the earlier 16th century (see below) but removed, and the arch blocked, before 1844; the blocking is pierced by a single cusped lancet, in yellow oolite, from 1899. The double-chamfered chancel arch was rebuilt, in yellow oolite, in 1899. The softwood ‘wagon-roof’ ceiling is from 1899 and lacks trusses, all rafters having collars and matchboarding. The floor was raised in 1899 and given black-and-white tiles (in imitation of a pre-existing floor?), partly replaced in the 20th century.

The nave is similarly of 2 phases, the 2 east bays being medieval while the 2 west bays were added in 1851-55 and are divided from the west bays by a plain, chamfered 2-centred arch from 1851-55 occupying the site of the original west wall. The west bay of the original nave is lit by a cusped single lancet in each side wall, from 1899; an external socket high up on the south wall is of unknown function. There is no evidence for either a medieval north or south door. The present south door is from 1851-55 and lies in the east bay of the 19th century extension; it has a 2-centred surround in grey oolite. To the west is a contemporary, uncusped double-lancet window in grey oolite. The north wall features the scar of a former lean-to building (boilerhouse?) of unknown date; internally, there is a blocked fireplace at the west end of this wall. The west, gable wall is pierced by a double-lancet in grey oolite, with a circular light in the spandrel, from 1851-5. The original west bays have a medieval, 2-centred barrel vault while the 19th century extension features a timber roof with collar-rafter trusses, carved into trefoils and arch-braced from wall corbel, all from 1851-5. The passages were oolite-flagged in the 20th century; the suspended board floors are from 1899 and contemporary with the seating.

The north chapel communicates with the chancel through a wide, depressed 4-centred arch that is nearly triangular headed; it is plain but has a slight chamfer, and is from the mid-late 16th century when the north chapel was built replacing an earlier north chapel or skew-passage. The chapel is lit by a 3-light window in the east, gable wall, with cusped, neo-Perpendicular tracery in a square surround and label, all in yellow oolite from 1899 but possibly in imitation of a mid-late 16th century original. Internally, there is a plain, 2-centred piscina in the eastern stop of the archway into the chancel. The oak and softwood ‘wagon-roof’ ceiling is from 1899. Floored as the chancel but the tiles are all from the 20th century.

The south transept is entered through a plain 2-centred arch from the 14th century. In the east wall is a recess like that in the chancel south wall, representing the blocked arch into the former south chapel or skew-passage discussed above; the arches are similar to those in the tower ground floor with which the chapel or passage was probably contemporary ie. earlier 16th century. The transept is now lit by a double-lancet window, with a quatrefoliated spandrel, in its south wall, of grey oolite from 1851-55. The 2 centred barrel-vault is from the 14th century. Floored as the nave.

The south porch was added to the nave extension at some period after 1855 but before 1888. The facework is in Flemish-bonded rusticated limestone with a external basal chamfered offset. The main south doorway has a double-chamfered surround in grey oolite, and there is a cusped single lancet in the west wall, both also from 1855-88. The softwood roof, and the tiled floor, are contemporary.

The lean-to vestry was added in 1899, in roughly squared and coursed limestone rubble with an external  basal offset in chamfered yellow oolite. It is entered from the north chapel through a contemporary doorway with a depressed 2-centred head, occupying the site of a former window possibly from the mid-late 16th century (NLW, SD/F/25). It is also entered from the churchyard through a doorway in its east wall with a very depressed, nearly square-headed ogival surround, in yellow oolite from 1899. The vestry is lit by 2 windows in the north wall and 1 in the west wall; all have 2 square-headed lights in square surrounds of chamfered yellow oolite from 1899, very badly weathered. The softwood lean-to roof is also from 1899 and continues the northern slope of the chapel roof.

A deep, wide revetted cutting runs along the nave north wall, the tower, exposing its footings, the vestry and the south-west corner of the nave; a shallow drain surrounds the rest of the church. There is earthwork evidence, debris?, for the former south chapel/skew passage. The churchyard area beneath and around the vestry was lowered in 1899. The floor of the north tower was lowered, and that of the chancel was raised, in 1899. Floors are suspended above a void. External memorials lie significantly close to the south side of the church.

The 2 nave east bays, and the west bay of the chancel, appear to be the earliest work and may be 13th century. The style of the south transept arch suggests a 14th century date. The transeptal north tower appears to be all one build and its openings date it to the earlier 16th century; it appears to be contemporary with an earlier north chapel/skew-passage which was entered through an arch with a very similar profile to that of the former south chapel/skew-passage, and thus the three components may have been contemporary. The present north chapel is from the mid-late 16th century. The chancel was extended eastwards into line with the north chapel east wall at a somewhat later date, c.1600?; the joint with the chapel proves the chancel east bay to be later. The 2 nave west bays, the south porch and the vestry are 19th century.

The church was described by Fenton c.1811 ‘as a singular little building with its tower oddly disposed’ (Fenton, 1903, 260). Some renovation had evidently been undertaken before 1833 as Lewis noted that the church was ‘well fitted up for the accommodation of the parishioners’ (Lewis, 1833). The south chapel or skew-passage had gone by 1844, and is not shown on the tithe map of that year (NLW, Amroth, 1844).

The church was restored and enlarged between 1851 and 1855, to the designs of the architect R. Kyrke Penson (Nicholas, 1995, 1; SPARC, 1997). The 2 nave western bays were added, and most of the present windows were inserted. The church was reroofed, refloored, replastered and reseated. The south porch was added, apparently by Penson, at a later period, but before 1888 when it was shown on the Ordnance Survey 1:2500 second edition; it is stylistically unlike the rest of Penson’s work.

A second restoration was undertaken in 1899, to the designs of the architects Prothero & Phillott (NLW, SD/F/25). The vestry was added, with a doorway that apparently occupies the site of a mid-late 16th century window. The chancel arch was rebuilt. The north chapel east window was rebuilt, as was the chancel west bay south window. The west bay of the pre-1850s nave was fenestrated. The chancel and the north chapel were reroofed. The chancel floor was raised and refloored, the tower floor lowered, and the church was again reseated.

The lean-to building that formerly lay north of the nave may have been a boilerhouse. Its date is unknown and it is shown on no maps.

The sanctuary fittings, including the plain oolite reredos, are mainly from 1899, as are the softwood pews and pulpit (NLW, SD/F/25).  The north chapel altar fittings are 20th century.

The font has a square bowl, stem and base, the bowl with incised foliated decoration, all from the 14th century.

The churchyard appears possibly to have been formed out of the northern part of a large irregular circular enclosure defined by hedgebanks and tracks – a former llan?.

St Elidyr, Amroth, was a parish church during the post-conquest period (Rees, 1932), of the medieval Deanery of Pembroke. It was granted c.1150 to the Knights Hospitaller of Slebech, by William Herrizon, with the permission of William of Narberth (Green, 1911, 232).

The patronage fell into private hands after the dissolution, but during the later 17th century presentations were being made by the Bishop of St Davids (ibid.). In 1833 the living was a discharged vicarage in the patronage of Charles Poyer Callen Esq., rated in the king’s books at £3 18s 6½d, endowed with £600 royal bounty and £600 parliamentary grant.

In 1998 St Elidyr, Amroth, was a parish church. The living was a vicarage, held with St Issells (Benefice 669) in the Archdeaconry of St Davids, Rural Deanery of Narberth (St Davids, 1997-8).

‘St Elidyr’ can be equated with St Teilo.