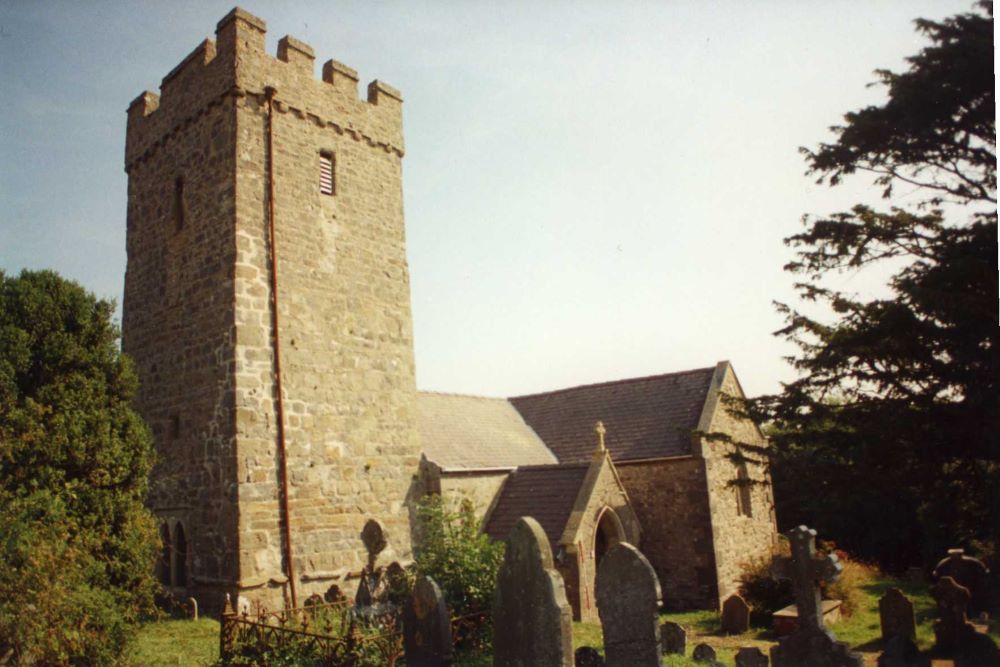 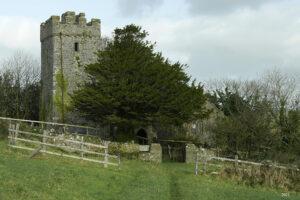 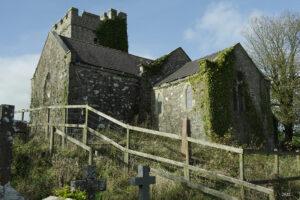 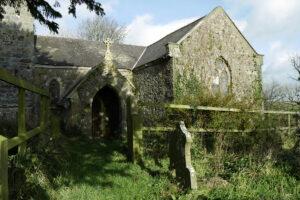 Reasons for Listing: Listed as a small rural church retaining significant mediaeval elements including the tower.

No longer in use. The building seems intact however it looks very sad bearing in mind this was a nice small church in 1998. The image from the original survey has been kept as the report header.

The present church consists of a 2-bayed chancel, a 3-bayed nave, a single-bayed north transept, a single-bayed  south transept, a south porch, a 3-storeyed west tower, and a single-bayed vestry north of the chancel west bay. There may formerly have been a northern skew-passage or north chapel. Construction is in limestone rubble. The tower openings and barrel-vault are medieval; other internal arches, including the chancel arch, were entirely (re)built in 1843, in neo-Gothic style. The main embrasures are also from 1843; other openings, and the yellow oolite dressings, are from 1878. Pointing is mainly from 1878 and the interior is plastered. Roofs are slated gables; the vestry has a slated lean-to roof and the tower roof was not seen.

The chancel was substantially rebuilt in 1843 with proud, limestone ashlar quoins. The east window is a graduated triple-lancet, with uncusped plate-tracery in yellow oolite from 1878, in a 2-centred opening from 1843. The south wall is pierced by 2 cusped, single lancets in yellow oolite from 1878. A corbel lies high up on the external face of the north wall, possibly relating to a former component here – a skew-passage to the north transept?, or a north chapel? (see below). The plain, 2-centred chancel arch is from 1843. The softwood roof lacks trusses, is matchboarded and is also from 1843. The tiled floor is from 1878.

The nave is lit by 2 single lancets in the south wall, like those in the chancel and similarly from 1878. The south door lies between the 2 and has a 2-centred chamfered surround probably from the 1843 rebuild. There is one window in the north wall, of 2 lights with uncusped plate tracery like that of the chancel east window and similarly from 1878, but occupying a 2-centred opening possibly from 1843. The north-west and south-west corners of the nave were quoined like the chancel in 1843. The softwood roof has strutted king-post and matchboarding from 1843; it forms a ‘crossing’ with the transept roofs in the east bay. The passages are tiled, with suspended board floors, from 1878 with a below-ground heating chamber.

The north transept is quoined as the chancel and entered from the nave through a 2-centred arch like the chancel arch and similarly from 1843, and lit by a window in the north gable wall like that in the nave north wall and similarly possibly occupying an 1843 opening. A corbel lies high up on the external face of the east wall, possibly relating to a former component here – a skew-passage to the chancel?, or a north chapel? (see above). The softwood roof is from 1843 and like that in the nave, but without the king-posts. Floored as the nave.

The south porch was entirely rebuilt in 1878 in small sandstone rubble, regularly coursed and squared. The contemporary doorway has a chamfered, 2-centred surround above which is a drip-mould of patterned ?concrete blocks on Acanthus-moulded stops. The softwood roof lacks trusses, all rafters being collared, with matchboarding, all from 1878. The flagged floor is also from 1878.

The lean-to vestry was added in 1878, possibly occupying the site of a former skew-passage from the north transept, or a north chapel. The vestry is entered from the chancel through a contemporary doorway with a chamfered 2-centred surround, and by a cusped single lancet in the east wall. The softwood roof, and the floor, are also from 1878.

The tower lies within a primary cutting, through the sloping yard, and the east end lies on a corresponding earthwork platform. The church is surrounded by a very shallow, concrete-lined drain. There may have been a former northern skew-passage or north chapel. Floors are suspended above a void. There is a below-ground heating chamber in the nave, and there may be cellar beneath the north transept. External memorials and burial earthworks lie significantly close to the church.

The chancel, nave, and north transepts may be fundamentally medieval but were extensively rebuilt in 1843 (RCAHM, 1925, 85) and cannot be closely dated; the north transept was however secondary, exhibiting an external joint with the nave. The north transept and chancel exhibit physical evidence of a possible skew-passage or chapel. The tower is late, probably from the mid-late 16th century (but Thomas, 1964, claimed that it may be as late as the 17th century). The south transept is from 1843. The south porch was rebuilt in 1878 on the site of an earlier porch, and the vestry is contemporary.

A drawing dated 1847 (NMR, Pe 205, 780298) shows the church both before and after the 1843 rebuild. The pre-rebuild church comprised chancel, nave, north transept, south porch and west tower. The east window was of 3 lights in a 2-centred surround, apparently with plate tracery comprising a single quatrefoil – medieval?. There was a small single ?medieval lancet in the chancel north wall, a square window of late 18th – early 19th century domestic style in the transept gable wall, two double lancets of uncertain date in the nave south wall, and a further window, not shown in elevation, in the nave north wall. The south porch door was a simple square opening which may date the former porch to the late 18th – early 19th century. The church was reroofed, reseated, and presumably refloored. Any former skew-passage or north chapel had gone.

The post-rebuild church is shown with the new south transept which, as built, was not gabled but had a hipped roof. The new east window had 3 lights with geometric tracery, there was a triple-lancet in the south transept and a double lancet in the north transept. The nave south-west window  is similar to that shown in the pre-rebuild drawing and was either retained or rebuilt and there was a window in the nave north wall. The south porch doorway was rebuilt as a 2-centred arch.

The church was restored in 1878 (Green, 1911, 286; RCAHM, 1925, 85) but neither the details, nor the architect responsible, are known. The south porch was entirely rebuilt, and the present windows were inserted. The church was reseated, refloored and replastered. The nave heating chamber was inserted.

The altar rail, softwood reredos, commandment tablets, and the softwood pews are probably all from 1878. The carved rood beam, with Holy Family figures, is from c.1900, as may be the oolite pulpit. The softwood and glass tower screen is mid 20th century.

The oolite font has an octagonal bowl and stem, and a square base, all 19th century and probably from 1878.

St Elidyr, Crunwere, was a parish church during the post-conquest period (Rees, 1932), of the medieval Deanery of Pembroke. The living was a rectory which was a possession of the Benedictines of Monkton Priory, Pembroke (Green, 1911, 286). Monkton was dissolved as an alien priory under Henry V and its possessions transferred to St Albans Abbey. At the dissolution, it fell to the crown (ibid.), and remained in royal patronage. In 1833 the living was a discharged rectory rated in the king’s books at £6 16s 10½d (Lewis, 1833).

In 1998 St Elidyr, Crunwere, was a parish church. The living was a rectory, held with Begelly and Ludchurch (Benefice 815) in the Archdeaconry of St Davids, Rural Deanery of Narberth (St Davids, 1997-8).

The church is mentioned, as ‘Lann Cronnguern’, in the 12th century Book of Llandaff which may suggest a pre-conquest foundation (RCAHM, 1925, 85). ‘St Elidyr’ is equated with St Teilo.