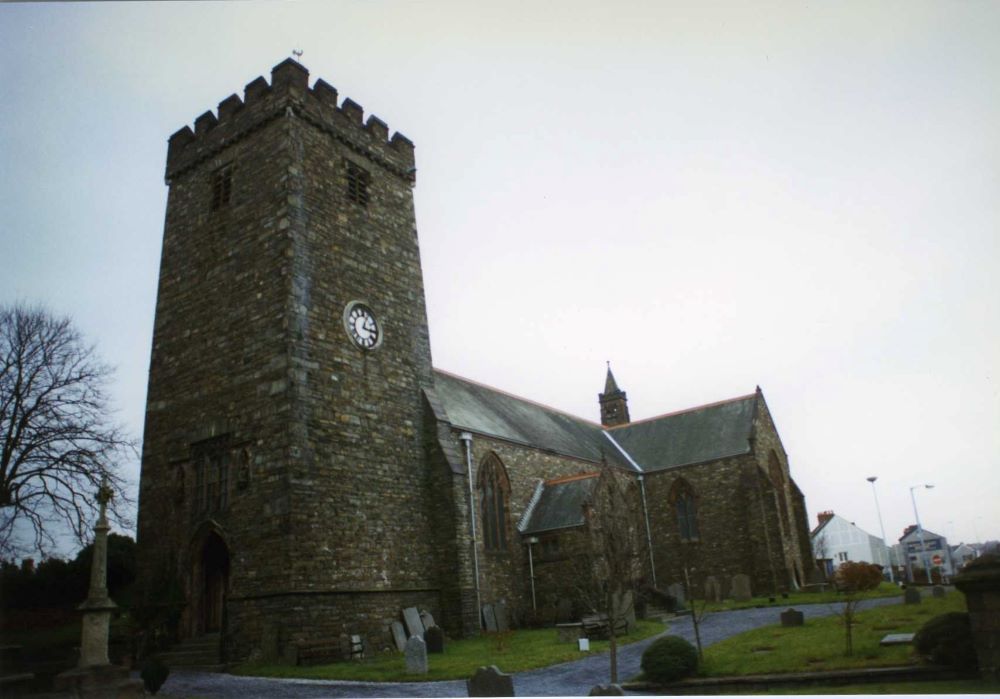 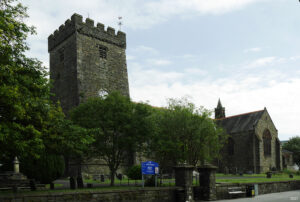 Reason for Listing: Of exceptional interest on account of interior with fittings and notable monuments.

The present church consists of a 3-bayed chancel, a 4-bayed nave, a 2-bayed north chapel (over a below-ground boilerhouse), a 2-bayed south chapel/vestry, a single-bayed north and south transepts, a south porch and a 3-storey west tower. Construction is in snecked local rubble throughout. The external pointing is generally good and from 1907; there are no internal finishes. Roofs are slated gables; the south chapel/vestry has a slated lean-to roof while the west tower has a flat roof.

The entire church, except for the west tower, was (re)built in 1905-7. All openings, except in the tower, are from this rebuild and are neo-gothic; they include the chancel arch, transept and chapel arcades, windows, doors and a triple sedilia in the chancel south wall. All internal dressings are in yellow oolite; the external dressings are in red Hollington stone (NLW, SD/F/316). The windows are cusped, of 2, 3 and 4 lights in a Perpendicular style. There is limited external buttressing. Over the crossing is a sanctus bellcote in the form of a low square turret in red Hollington stone crowned by a low spire, from 1905-7. The chimney from the below-ground boilerhouse is neo-gothic and emerges from the valley between the chancel and north chapel, also from 1905-7. There is a flight of steps up to the south porch whose facade features figure sculpture from 1905-7. The roofs are softwood and from 1905-7; the chancel floor is black-and-white tiled while the remainder has woodblock floors over a void.

The medieval west tower is fairly typical of the region and dates from the earlier 16th century though it has been heavily restored at a number of periods. It is tapered and has an external batter up to a string-course. A square stair turret projects from the west half of the north wall and is lit by simple slit lights. The ground floor is unvaulted and entered from the nave through an arch from 1905-7; the west door with its moulded surround was similarly rebuilt in 1905-7 but copying the earlier door; it is approached up a flight of steps which again copy an earlier arrangement drawing (NLW, SD/F/316). Above the door is a 3-light Perpendicular window beneath a straight drip-mould, flanked by 2 niches containing figure sculpture; all are shown on a pre-1905 drawing (ibid.) and are originally 16th century, but restored/rebuilt. The second storey is blind but features a clock. The third floor features a simple 2-light openings in all walls and a crenellated parapet on an external corbel table, at a higher level around the stair turret; all were rebuilt in 1905-7.

There is a very wide, deep external cutting around the north half of the church; it is probably primary but was secondarily deepened and widened in 1905-7. A shallower cutting runs along the east wall. All floors, except in the porch and tower, are suspended over heating flues. The boilerhouse beneath the north chapel is below ground and reached by a flight of external steps along its east wall. There may be a number of internal burial vaults, and south chapel/vestry was built over burials in 1905-7. External memorials, including burial vaults, lie close to the south walls.

The west tower is from the earlier 16th century. The remainder of the church is from 1905-7 but largely follows the plan of the earlier structure.

It appears that the church underwent a thorough restoration as a result, commemorated in a datestone formerly present at the church, but bearing the date ‘1683’ (Evans, 1921, 64). Bells may have been introduced; they were present by 1790 (Evans, 1922, 56) when the church ‘and steeple’ were sound, including ‘roof, windows, walls and bells’ but the pews were ‘out of order and repair’. Nevertheless, the church was described as ‘ruinous’ in 1771 (Buckley, 1973, 110).

A plan of the church from 1839 (NLW, SD/F/314) shows a chancel, nave, west tower, south porch, and north and south transepts.  The transepts, labelled the ‘Glyn Chapel’ and the ‘Berwick Chapel’ respectively, may have been recent additions; in a description of 1833 two transepts ‘have been added’, and ‘other additions made’ (Lewis, 1833), but prior to 1822 when the Berwick Chapel was mentioned (Evans, 1919, 15). Further restorations took place in 1823 (Anon., 1986). In 1833 the whole constituted ‘an irregular edifice, having a tower surmounted by an embattled parapet’ (ibid.).

The sanctus bell was apparently hung in a large, square turret, of a much greater size than the present sanctus bellcote and apparently comparable to the west tower in size (Anon., 1986; Mee, 1917, 8) although it is difficult to see how such a structure could have been supported; there were no crossing piers (NLW, SD/F/314). The turret may have been the belfry referred to in 1684 as ‘out of repair’ (Evans, 1915, 97). It apparently had a ‘tapering spire’ (ibid.) but was taken down in 1845.

The church was restored and ‘altered’ in 1845 (Anon., 1986; Evans, 1915, 97). The restoration was apparently of high impact. The south porch was removed, a vestry probably built and the church was reroofed and refenestrated. An account from 1849 (Glynne, 1898, 367-8) describes the restored church as ‘much modernised, cruciform in plan… having a western tower… the only feature which preserves its original character’ but with a ‘modern’ west window. The chancel and tower arches were low, 2-centred, and possibly medieval; there was a sedilia (‘or piscina’) in the chancel. Everything else was ‘modernised, and in a very poor style’. Drawings accompanying the faculty application for the 1905 restoration (NLW, SD/F/316) may depict the church substantially unchanged from 1845. The west tower is shown with similar fenestration to today. The chancel, nave and transepts were of similar dimensions to the present church. There was no south porch, or chapels. A small, lean-to vestry lay north of the chancel west bay, probably from 1845. A transeptal schoolroom and lean-to coalhouse lay north of the west tower; they had neo-Classical openings and may have been pre-1845 (though not shown in 1839). All other openings were neo-gothic, comprising tall, 2 light windows in the nave, and in the transept end wall, and somewhat smaller but similar windows in the chancel; the windows were apparently from 1845 (ibid.). A west gallery occupied the western half of the nave, and there were further galleries in each transept reached by external staircases. The nave south wall was buttressed, and there were angle buttresses at the east end and transept end walls. All roofs were ‘flat-pitched, king-post’ roofs, with ceilings, from 1845 when the ‘ancient roofs’ had been swept away. The passages were paved with ‘rough stones’ (all ibid.).

The church was rebuilt in 1905-7 to the designs of the architect G. F. Bodley (Cadw, 1992, 4; Yates, 1974, 72) but the work was undertaken by E. M. Bruce Vaughan, of Cardiff (NLW, SD/F/316). It is apparent form the fabric that, although not originally specified, all walls except those of the tower were demolished and rebuilt; the upper half of the tower belfry, in fact, was rebuilt and the west window, and the niches either side (which were thought to be medieval) were rebuilt.  A south porch was reintroduced.

All major fittings, including the oak stalls, screens, reredos and pulpit, date from 1905-7. The nave is seated with loose chairs, as it was in 1907.

The west tower was restored in 1968 (plaque in church).

There is a ?medieval churchyard cross-base, with a 19th century cross (Grade II listed).

St Elli, Llanelli, was a parish church during the medieval period (Rees, 1932), of the medieval Deanery of Kidwelly. It was valued at £10 per annum in the late 13th century, when the living was in the patronage of Patrick de Chaworth, Lord of Kidwelly (Anon., 1986). With de Chaworth’s death, the patronage passed to the crown (ibid.). In the later 14th century, the tithes were appropriated by John of Gaunt to the collegiate church of St Mary at Leicester (ibid.). There were 4 subordinate chapels within the parish until the Reformation (Lewis, 1833).

After the Reformation, the patronage eventually passed into the hands of the Earl of Northumberland (Anon., 1986). In 1833 the living was rated in the king’s books as a discharged vicarage, at £6 6s 8d, but was strictly a perpetual curacy (ibid.); it was endowed with £200 private benefaction, £200 royal bounty and £1000 parliamentary grant and in the patronage of Rees Goring Thomas, Esq., who was the impropriator of all the tithes which had been alienated from the church at the Reformation (ibid.).