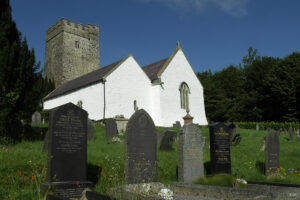 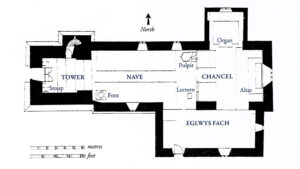 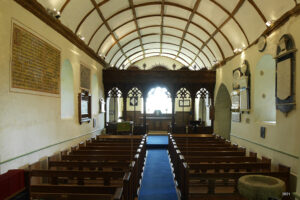 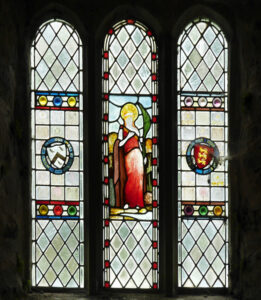 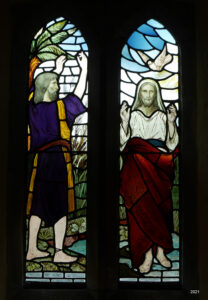 Reasons for Listing: Listed as the most complete medieval church in Cardiganshire, with fine late C15 roof and tower.

The present church consists of a 3-bayed chancel/nave, without structural division past or present, a 2-bayed south chapel, a single-bayed transeptal organ chamber north of the east bay, and a 4-storeyed west tower. Construction is in local rubble throughout, with early 20th century pointing over the remains of earlier render; plastered within. Openings are in the main medieval, but the nave was partly refenestrated in the earlier 20th century. Roofs are slated gables; the west tower roof was not seen.

The chancel/nave walls have a slight external batter. The cusped, 3-light east window has Perpendicular tracery and dripmould, in limestone and from the 16th century but has been heavily restored.  The north wall retains its quoins at the west end and is pierced by 2 windows with semi-circular-headed embrasures, 12th century?; the present 2-light windows have simple tracery, dripmoulds and infill from the early 20th century. The scar from the flue of a former heating apparatus lies in the same wall. The south wall west bay is pierced by a window comprising 2 cusped, ogee-headed lights with a central quatrefoil, in limestone, Decorated, c.1400. Internally, the east bay north wall exhibits a socket and corbel possibly associated with a former rood screen. The oak-framed, ‘wagon-roof’ ceiling is from c.1500. The passages are tiled, with an underfloor heating chamber for a ‘Porritt’s’ stove, and suspended woodblock floors, all early 20th century.

The south chapel communicates with the 2 east bays through and arcade of 2 depressed, 2-centred arches from the 15th century. The walls are also battered externally. The single lancet east window is 15th century, and there is a similar  2-light window in the south wall, largely rebuilt; the 2-centred south door has similarly been largely rebuilt. The exterior of the west wall features a small, weathered stone with a crucifix carved in relief, medieval, not in situ and not closely dateable. Ceiled as the chancel/nave, with bosses at frame junctions, c.1500. The woodblock floor, from the early 20th century, overlies a burial vault (churchwarden, pers. comm.).

The west tower is from c.1500 and comprises 4 storeys, rather larger than the majority in the region (but cf. Llanllwni and Llanybydder). A square spiral stair turret projects from the eastern half of the north wall, entered through a segmental-headed doorway from c.1500 and lit by simple square slits of similar date. There is an external batter up to a string-course. The west door has a moulded, 2-centred surround with a dripmould, from c.1500; above it lies a moulded shield with a portcullis device, in turn lying beneath an uncusped 3-light window with a square dripmould on Tudor Rose stops, with the arms of Sir Rhys ap Thomas, all c.1500. The ground floor has a 2-centred barrel-vault, with corbels at springer level, recently inserted; there is a stoup in the south wall, medieval, reset in a rebuilt recess. It communicates with the nave through a plain 2-centred arch, c.1500; the floor comprises 5 broad, flagged steps down to the nave. The second storey is lit by a slit light with a square surround in the north wall, and a 2-centred window in the south wall, c.1500. The belfry stage has a 2-light opening with a square dripmould in the east wall, c.1500, and a single-light opening in the west wall. The crenellated parapet lies on a corbel table. The east and west walls are cracked from top to bottom.

A deep external cutting runs along the north wall and west tower, mainly primary. The floors are suspended over heating ducts in the chancel/nave, south chapel and organ chamber. There is a heating chamber in nave, and a burial vault lies beneath the south chapel east bay. The west tower floor may have been lowered. External memorials lie significantly close to the east wall.

The organ chamber was added in the early 20th century when the church was restored under W. D. Caroe. The nave was partly refenestrated, but overall the restoration was very low impact and openings were restored rather than rebuilt. The interior was refloored.

The limestone font has a wide, circular bowl with moulded masks of the 12 apostles, from the 12th century; the stem and base are 20th century.

St Gwenog, Llanwenog, was a parish church during the medieval period (Rees, 1932), of the medieval Deanery of Sub-Aeron. It was a possession of St Davids, as a prebend of the collegiate church at Llanddewi Brefi (Lewis, 1833). There were 4 dependent chapelries within the parish (ibid.).

In 1833 the living, a discharged vicarage, was rated in the king’s books at £17 12s 11d, endowed with £600 parliamentary grant and in the patronage of the Bishops of St Davids (ibid.). The tithes were subject to a long standing division into two divisions, the ‘Freehold’ and the ‘Grange’, which in 1833 were divided between the Highmead, Crosswood and Peterwell estates and the vicar.

In 1998 St Gwenog, Llanwenog, was a parish church. The living was a vicarage, held with Llanllwni and Llanybydder  (no benefice no.) in the Archdeaconry of Cardigan, Rural Deanery of Lampeter and Ultra Aeron (St Davids, 1997-8).

Anon., 1913(iii), ‘St Gwenog: Her Church and her Well’, Transactions of the Cardiganshire Antiquarian Society Vol. I.