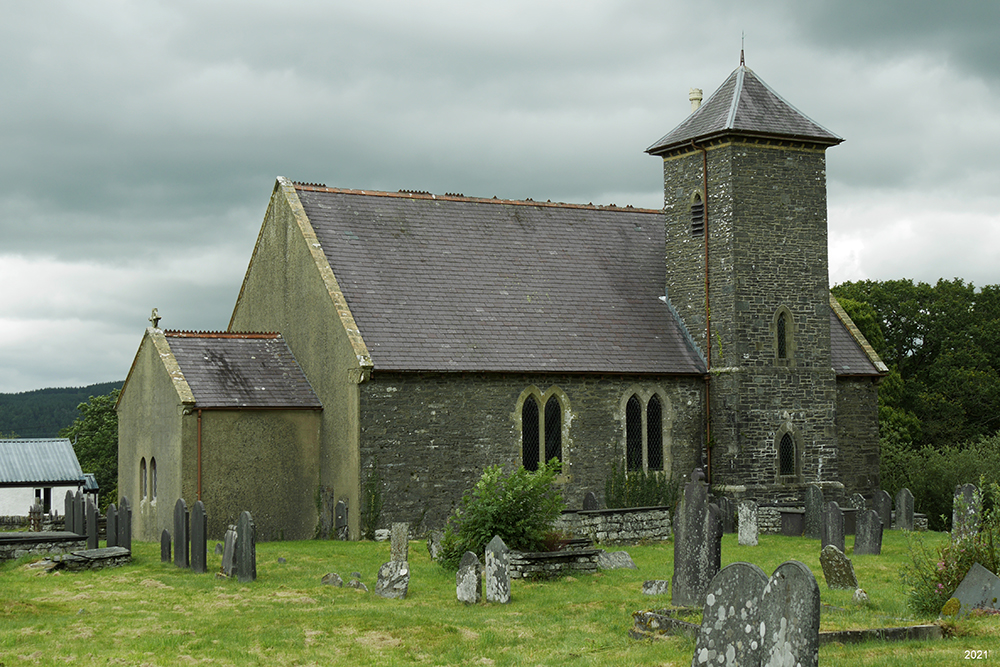 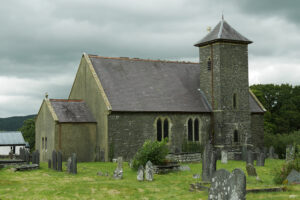 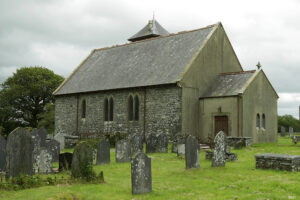 The present church consists of a single-bayed chancel and a 3-bayed nave, now without structural division, a west porch and a 3-storeyed transeptal tower south of the nave east bay. Construction is in local rubble throughout. Detail is largely later 19th century; openings are neo-gothic with yellow oolite dressings, from the later 19th century. Pointing is mainly from the later 19th century with some 20th century repointing; the nave west wall and west porch are rendered externally, 20th century. The interior is plastered. Roofs are slated gables; the south tower has an overhanging pyramidal slated roof.

The west porch may be a medieval structure but has been heavily rebuilt and rendered externally like the nave west wall; in the south wall is a 2-centred internal recess that may be medieval, a blocked window?. There is a doorway in the south wall like the nave west door, later 19th century, and a 20th century, 2 light window with semicircular heads in the west wall. The collar-rafter roof is concealed beneath 20th century matchboarding. The flagged floor may be later 19th century re-use of 1829 flags, laid directly on the substrate.

The 3-storeyed tower was built south of the nave east bay in the later 19th century. There are a number of external offsets. The ground floor is entered from the nave through a  plain, 2-centred doorway, later 19th century, and lit by a contemporary single lancet; there is a fireplace in the north-west corner leading to a ceramic chimney-pot in the roof, all later 19th century. The ceiling is boarded and the floor is flagged as the west porch. The second storey is entered from the steps in the chancel south wall and lit by a lancet like the ground floor. The belfry stage has a similar, louvered lancet in the east and west walls; there is no parapet, the pyramidal slate roof overhangs the eaves.

There is a medium-depth, earth cutting along the north and south walls. The floor is suspended over an underfloor void in the nave. Many external memorials lie significantly close to all walls.

The chancel and nave are medieval, but cannot be closely dated. The west porch may also be partly medieval. The tower was added in the later 19th century.

The church was heavily ‘restored’ in 1829 (Crossley and Ridgway, 1946, 55), commemorated in a datestone over the entrance, when the walls may have been partly rebuilt or at least refaced. The building was described by Lewis, 1833, as ‘a small ancient edifice, consisting only of a nave and chancel’.

The church was restored again in the later 19th century, prior to 1878 when it was described as ‘almost entirely new’ (Anon., 1878, 350). The south tower was added, truncating the rood-loft stair, and the west porch was largely (re)built. The church was refenestrated and the doors rebuilt; the chancel arch was removed. The church was reroofed. The interior was refloored, replastered and reseated.

The octagonal oolite font is from the later 20th century. The small, cylindrical medieval bowl lying loose in the tower may belong to the original font.

In the west porch is a scheduled, cross-incised ECM (PRN 1974; SAM Card 111), the ‘Hirodil Stone’, with an inscription dated to the 9h century, it formerly stood in the churchyard (Various, 1994, 416). The churchyard is associated with a cropmark enclosure (ibid., 404).

St Gwnnws, Llanwnnws, was not a parish church during the medieval period (Rees, 1932), but an upland chapelry of the medieval Deanery of Ultra-Aeron.

In 1833 the living was a perpetual curacy of the Archdeaconry of Cardigan, in the patronage of the Chichester family, endowed with £800 royal bounty and £1400 parliamentary grant (Lewis, 1833).

In 1998 St Gwnnws, Llanwnnws, was a parish church. The living was a vicarage held with Llanfihangel-y-Creuddyn, Llanafan-y-Trawscoed and Ysbyty Ystwyth (Benefice no. 827) in the Archdeaconry of Cardigan, Rural Deanery of Llanbadarn Fawr (St Davids, 1997-8).