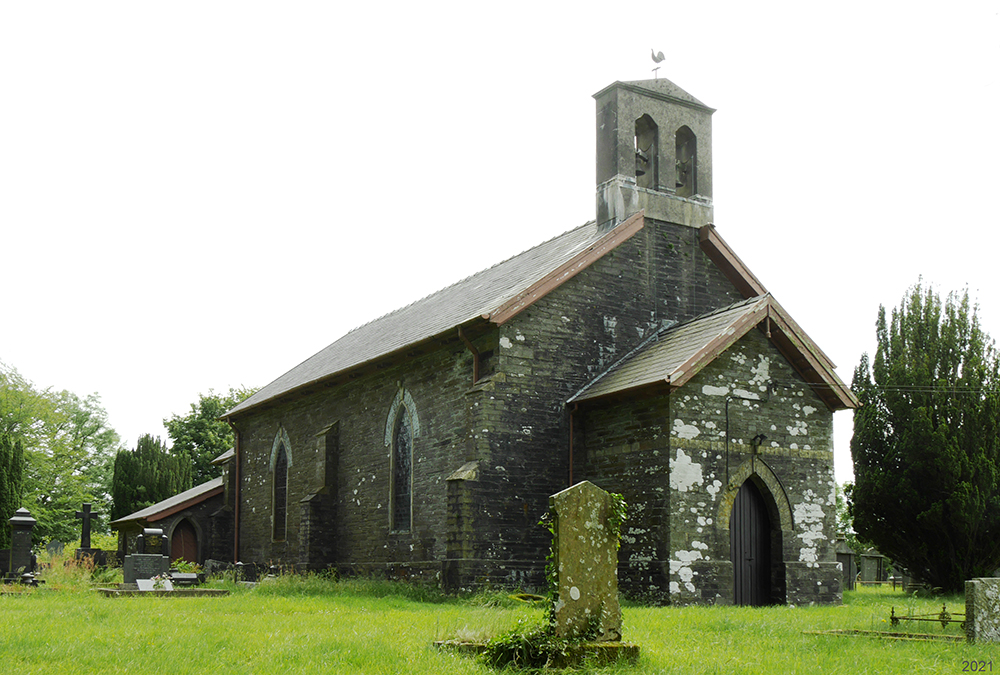 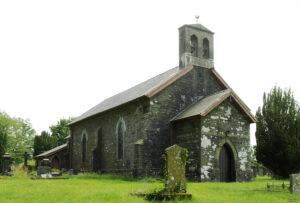 Archaeological potential – very good. No physical evidence of earlier church; no external cutting or drain; suspended floors in 50% of church, without heating ducts; no evidence for any further internal vault/crypt; external memorials lie significantly close to 50% of church.

St Gwynio, Llanwinio, is a 2-celled church, of small size. It was (re)built in 1845-6, apparently on the same site, and in the same location, as its predecessor (PRN 3942) but retaining nothing from the earlier fabric.

The present church consists of a single-bayed chancel, a 2-bayed nave, and a single-bayed vestry north of the chancel. Construction is in local slate block rubble; the interior is plastered and the bellcote is rendered. All dressings are in grey oolite and from 1845-6; the openings are neo-gothic comprising simple 2- and 3-light windows with simple tracery; the vestry windows, from 1926-7, have timber frames. The exterior is buttressed throughout. There is a gabled single bellcote at the west end, from 1845-6. The roofs are slated gables; the vestry has a slated lean-to roof. The chancel and vestry floors are suspended.

The church was altered in 1926-7 to the designs of W S P Cottrell, architect and surveyor for the Coomb & Kilsant Estate Office (NLW, SD/F/432). The vestry was built and the chancel floor was raised to the same level, while the church interior was partly reseated and new altar and panelling were installed. The church had been ‘painted’ both inside and out in 1922 (Carms. R. O., CPR/25/10).

There is no physical evidence of the pre-1845 church. There is neither an external cutting nor a drain. The floors are suspended only in the chancel and vestry, without heating ducts. There is no evidence for any internal vault or crypt. Some external memorials lie significantly close to the church.

There are the remains of a churchyard cross.

St Gwynio, Llanwinio, was a parish church during the medieval period (Rees, 1932), of the medieval Deanery of Carmarthen. It was a possession of the Cistercians of Whitland Abbey.

At the dissolution, the advowson fell to the crown but found its way into private patronage; in 1833, when it was a perpetual curacy endowed with £400 royal bounty and £1600 parliamentary grant, the patron was one Mrs Howel (Lewis, 1833).

In 1998 St Gwynio, Llanwinio, was a parish church. The living was a rectory, held with Trelech a’r Betws, Abernant and Eglwys Fair a Churig (Benefice no. 658) in the Archdeaconry of Carmarthen, Rural Deanery of Carmarthen (St Davids, 1997-8).