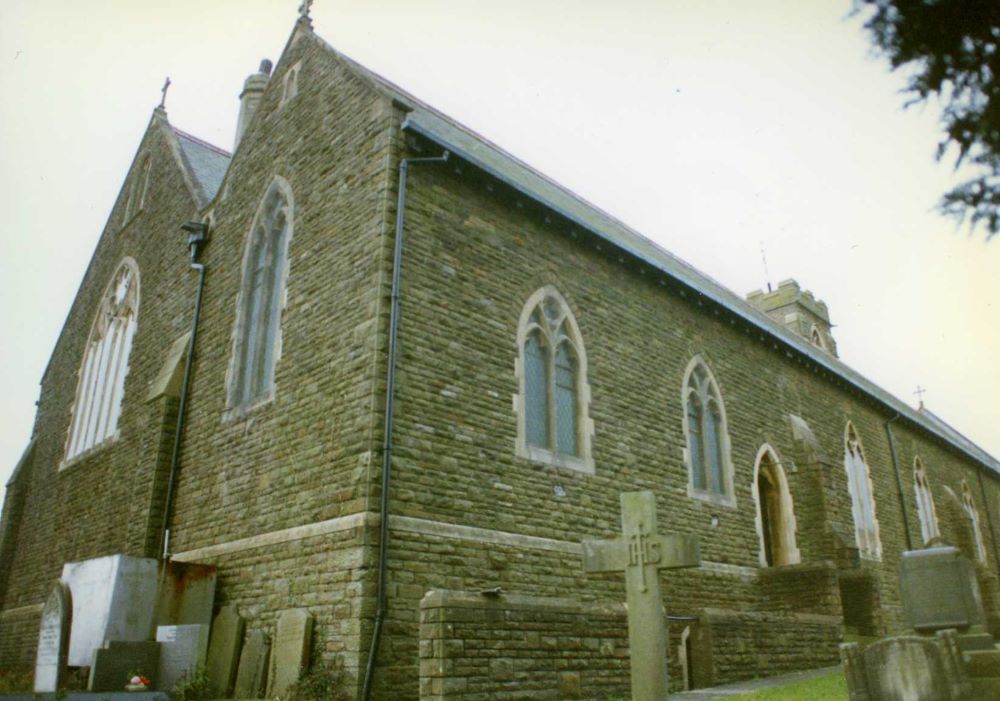 Reason for Listing: Listed as a well-detailed simple exercise in Gothic Revival, in a church of urban scale which is a prominent feature in the village.

St Gwynog, Llangennech, is a multicelled church, of large size. It was rebuilt in 1900-1904 to the designs of E. M. Bruce Vaughan, retaining some limited fabric from the earlier church (PRN 4717).

The present church consists of a 2-bayed chancel, a 3-bayed nave, a 2-bayed vestry (over a below-ground boilerhouse) north of the chancel, and a 4-storey west tower. The lowermost 1m of the north aisle north wall was retained from the pre-1900 church; it is in uncoursed rubble and features 2 truncated buttresses. The remainder of the church is from 1900-1904; construction is in snecked local rubble and the interior is plastered. Dressings are in yellow oolite and from 1900-1904; the openings are neo-gothic comprising 2-, 3- and 5-light windows with curvilinear tracery, a chancel arch and arcades. The exterior is buttressed throughout with cross-buttressing to the west tower, which has a crenellated parapet. The boilerhouse flue leads to a neo-gothic oolite chimney in the roof valley, from 1904. The roofs are slated gables; the tower has a flat roof. Floors are suspended except in the tower.

The church was entirely rebuilt in 1900-1904 to the designs of the architect E. M. Bruce Vaughan, of Cardiff (NLW, SD/F/357), in two stages (Griffiths & Lewis, 1994, 1). The west porch, and the west and south walls were entirely removed, but the north wall of the aisle was truncated to a height of 1m. The nave and aisle were rebuilt following the plan of the earlier church but without a south transept, and the west porch was represented by a tower; the work was complete by 1902. The chancel was then demolished and replaced by the present chancel and vestry in 1904.

The font has been retooled but the square bowl may originally date from the 15th century (RCAHM, 1917).

A shallow external cutting, with a deep drain, runs along the south wall of the church. There is an external stairwell along the vestry north wall. A cellar (boilerhouse) lies beneath the vestry. The floors are suspended over heating ducts except in the tower. Some external memorials lie significantly close to the east wall.

St Gwynog, Llangennech, was not a parish church during the medieval period (Rees, 1932), but a chapelry of the medieval Deanery of Kidwelly.

By 1833 it was a parish church (Lewis, 1833). The living was a perpetual curacy endowed with £600 royal bounty and £800 parliamentary grant, in the patronage of Edward Rose Tunno Esq. Of Llangennech Park (ibid.).

In 1998 St Gwynog, Llangennech, was a parish church. The living was a vicarage, held with Hendy (Benefice no. 678) in the Archdeaconry of Carmarthen, Rural Deanery of Cydweli (St Davids, 1997-8).