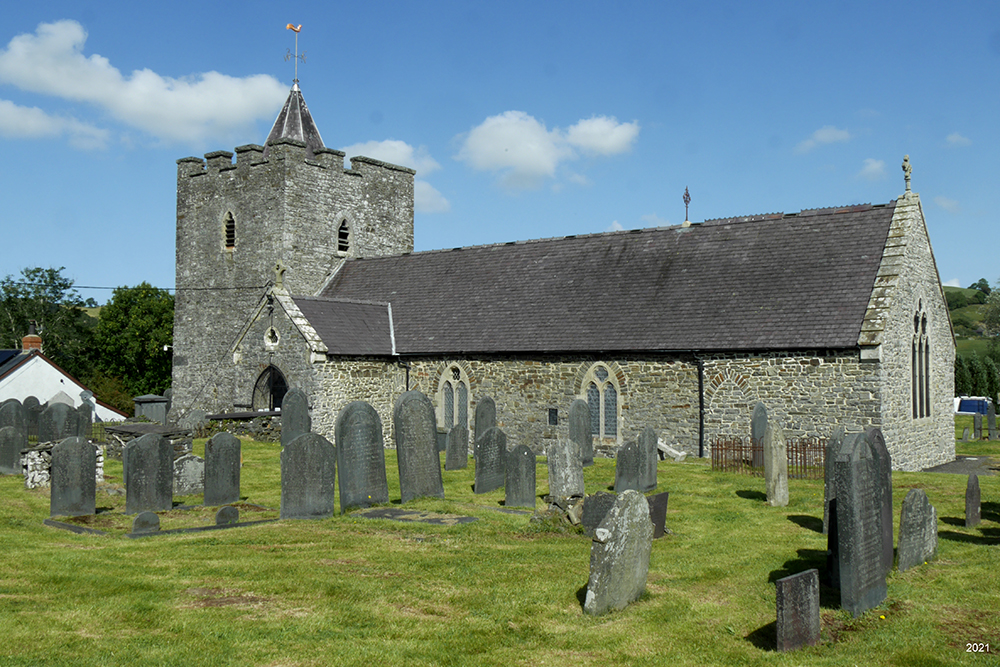 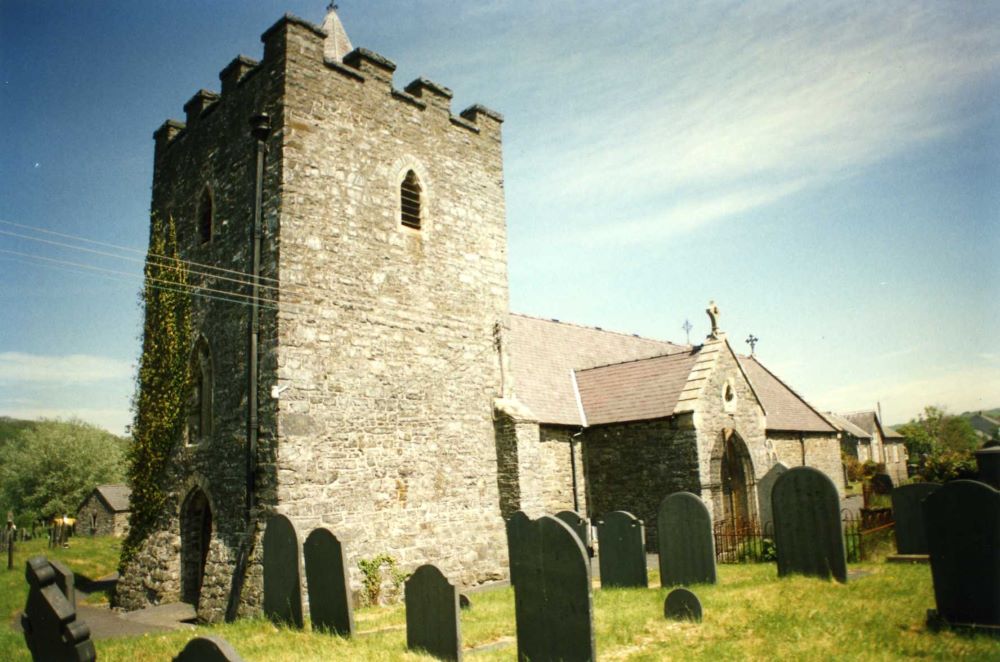 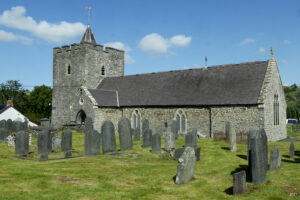 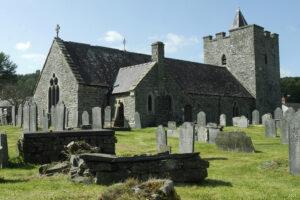 Reason for Listing: Graded II* as a medieval church with one of the very few surviving medieval roofs in the county, coherently restored in 1874-6 with interior fittings.

The present church consists of a 5-bayed chancel/nave, always without a chancel arch, a 2-storey west tower, a south porch, a 2-bayed vestry and bier house (north of the east bay), and a coal cellar west of the vestry. Construction is in limestone rubble throughout. Much external work has poor 20th century repointing obscuring the masonry; all internal walls are rendered/plastered. The chancel and nave are roofed as one, the simple two-cell plan reflecting the medieval arrangements; roofs are slated gables; the coal cellar has a slated lean-to roof while the west tower roof is pyramidal, and also slated.

The tower has a barrel-vaulted ground floor/ringing chamber, medieval. The belfry carries a high-pitched softwood pyramidal roof, not examined. The Chancel/Nave is gable roofed, as one, with oak king-post trusses arch-braced from the side walls and with cusped wind-braces; with the purlins the whole can be attributed to the 15th century and is inscribed (spuriously?) ‘J.S. W.W.A. 1431.  Church Wardens’. The common rafters are largely secondary, and over the eastern bay the roof has been rebuilt, probably in 1874. The Vestry/bier house and South Porch are both gabled, the former with a softwood king-post roof of 1874 and the latter with close-coupled common rafters arch-braced from the wall-plates, again in softwood and from 1874. Slate coverings throughout, re-roofed in 1984 (Guide).

It is not possible to closely date the fabric but a lancet in the east bay north wall may be 14th century, while the tower conforms stylistically to a phase normally attributed to the 15th century. The transeptal Vestry/bier house was added north of the chancel in 1874 (NLW SD/F/339); an internal wall divides the two. All openings in their present form are from the 1874 restoration (except the medieval lancet), and have neo-gothic chamfered oolite surrounds, but all re-used existing embrasures (NLW SD/F/339). Opposing blocked doorways can be seen in the external faces of both the north and south walls of the Nave, to the east of the present South Porch which partly obscures the southern door; they had been blocked prior to 1810 when the South Porch was already present (Meyrick, ed. 1907, 284) and the Tithe Map of 1844 shows that it was in its present position. The porch is of a muddier limestone rubble than the rest of the church, similar in fact to some of the 1874 work when it may have been largely rebuilt; however it is shown as today on the pre-restoration plan of 1874 (NLW SD/F/339). The porch is here assigned a general post-medieval date and the blocking of the original south door thus similarly; the north door was still open in 1856 (Freeman, 1856, 232) but blocked before 1870 (Glynne, 1897, 304-5). A blocked window is visible in the external face of the south wall of the east bay with low head beneath a wide two-centred arch; it may be post-medieval and was blocked in 1874 (NLW SD/F/339).

The entire church was refloored in 1874 with polychrome tiles in the east bay, and quarry tiled passages between suspended boarded floors in the remainder; iron wall ventilators lead to the voids beneath, 1874. An underfloor heating chamber occupies most of the west bay, with a flue running beneath the passage to a plain chimney in the vestry north wall, all established in 1874 and now disused, the Porritt’s stove gone (NLW SD/F/339). There is a suspended boarded floor in the Vestry, of 1874. the south porch is of quarry tiles laid directly on the substrate.

The Chancel/Nave walls were heightened in 1874 in muddy limestone rubble; at the same time the present weather tabling and crosses, all in oolite, were added.

The pre-restoration church was described by Meyrick in 1810 (Meyrick, ed. 1907, 284). In the South Porch he saw the stoup, apparently in situ but now lying loose in the vestry – removed in 1874? There was a typical (18th century) west gallery, and a screen of ‘elegant gothic carved work’ separating Nave and Chancel, one of the late medieval Ceredigion rood screens, now all lost. It had gone by 1833 (Lewis, 1833). The north west view of the church is depicted in a drawing by Freeman of 1856 (Freeman, 1856, 232) when the north door was still open; also shown are two plain square window openings in the locations of the present Nave windows, and the medieval lancet. The windows had timber frames (NLW SD/F/399) and appear generally late 18th-early 19th century. The Tower openings are also as their 1874 successors, as is the Tower roof structure. Glynne, writing c.1870, describes the church as ‘paved, neat, but dreary’; in addition to the north door he mentions a priest’s door, no trace of which survives today (Glynne, 1897, 304-5).

The church was restored in 1874 by R. Kyrke Penson, of Ludlow, when the alterations noted above were made. The estimated cost was £600 but in fact was ‘nearly doubled’, whilst difficulties were apparently encountered in gaining a Faculty (NLW SD/F/399). In summary, the church was refloored with suspended floors, re-fenestrated with new surrounds for windows and doors, the Vestry/bier house was built, the South Porch restored, the west gallery removed, the Chancel reseated in oak and the Nave in ‘Danzig’ pine, the font moved and new drain cut, and the church interior replastered. Disturbance was caused by the excavation of 0.35m beneath the church for concrete laying, and the cutting of a deep stone lined drain around the church. The proposed Vestry cellar was not excavated.

A coal cellar has been built to the west of the Vestry/bier house during the present century. It has a low wall supporting a corrugated pitched roof and a chute leading down to the (substantial) below ground element. During the 1930s the Tower West Door, restored in 1874 and now open, was blocked.

The church underwent some further minor restoration in 1984 when the Tower West Door was re-opened and the roofs were re-slated (Guide). It has been described as a building of special architectural and historic importance; Grade B listed (old system).

The font is unusual, having a heptagonal bowl with framed facets, in a material said to be an artificial composite, and has been dated to the 14th-15th centuries (Anon., 1915). It stands on a plain oolite stem and base in the tower ground floor where it was moved in 1874 (NLW SD/F/339). An oolite font lying loose in the porch is from the ruined church of Llanfihangel Rhostie, from where it was removed in 1988 (Guide).

Of the two bells (not examined), one is dated 1800 and in situ (Quinquennial); the other is also from Llanfihangel Rhostie and has been dated to 1350 (Guide); it bears the inscription ‘ +  Sc…A MARIA’.

The ECM, also in the Porch, is not in situ, having apparently been brought from Castle hill in 1958 (Guide).

Reason for Listing: Graded II* as a medieval church with one of the very few surviving medieval roofs in the county, coherently restored in 1874-6 with interior fittings.

St Hilary, Llanilar, was a parish church during the medieval period (Rees, 1932), of the  medieval Deanery of Ultra-Aeron. The benefice was a vicarage belonging to St Davids Cathedral.

In 1998 St Hilary, Llanilar, was a parish church. The living was a vicarage, held with Rhostie, Llangwyryfon and Llanfihangel Lledrod (Benefice 614) in the Archdeaconry of Cardigan, Rural Deanery of Llanbadarn Fawr (St Davids, 1997-8).