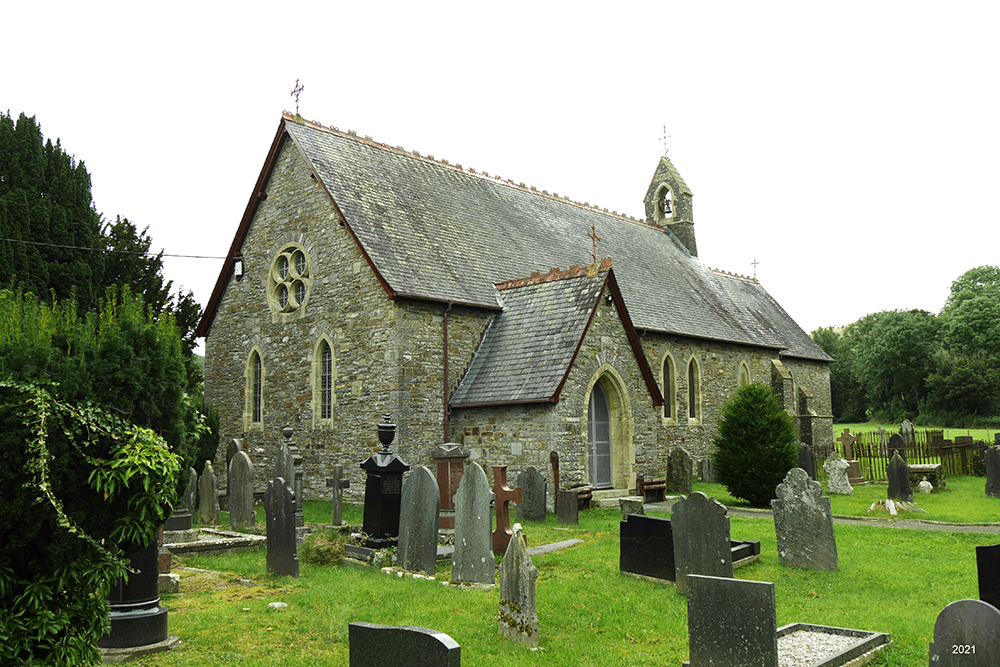 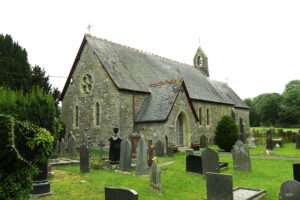 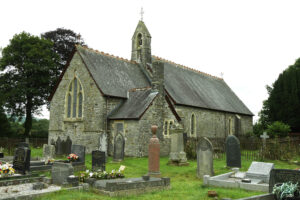 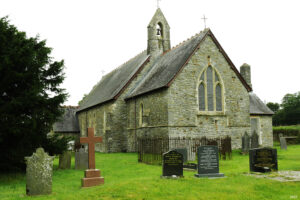 Archaeological potential – good. No physical evidence for pre-1806 church; slight platform around 40% of church, 1880-82?; no external cutting or drain around church; suspended floors in 60% of church; external memorials significantly close to 100% of church.

The present church consists of a 2-bayed chancel, a 4-bayed nave, a south porch and a single-bayed transeptal vestry north of the chancel. Construction is in local rubble, plastered within; all finishes from 1994. All dressings are in yellow oolite and from 1880-82, including the chancel arch; the openings are neo-gothic comprising simple single lancets; there is a simple rose window in the west wall and a simple 3-light east window. External buttressing is limited and from 1880-82. There is an external string-course around the chancel, 1880-82. The 1880-82 vestry fireplace is disused, but retains its simple chimney. A simple, gabled single bellcote lies at the east end of the nave over the chancel arch. The roofs are slated gables throughout. Floors are suspended in the nave and vestry.

The pre-1806 church was apparently considerably larger than its successor (Lewis, 1833). It was entirely demolished and rebuilt as ‘a neat edifice, consisting of a nave and chancel’ (ibid.).

The 1806 church is shown in plan and elevation in the 1880 Faculty bundle (NLW, SD/F/657). It comprised a 3-bayed chancel/nave without structural division. There were originally just 2 small, 2-centred neo-gothic windows, both in the south wall, and an east window. At some period prior to 1880 they had been blocked and 3 similar, but larger windows inserted in the south wall, with timber Y-tracery. The west porch shown in the drawings, with internal stone benching, was probably added at the same time. There was a simple, flat-top gabled, single bellcote at the west end.

The present church was erected in 1880-82 to the designs of the architect A. Ritchie of Chester (ibid.). Only the core of the chancel east and south walls were retained from the 1806 church, the new church extending considerably further north and west; the 1806 masonry was refaced. All structural detail, roofs, floors and fittings are from 1880-82.

There is no physical evidence for the pre-1806 church. There is a very slight platform along the south wall of the church, probably relating to the 1880-82 rebuild. Neither an external cutting nor a drain runs around the church. The nave and vestry floors are suspended over an underfloor void. Some memorials lie significantly close to the church.

Trefilan was a parish church during the medieval period (Rees, 1932), of the medieval Deanery of Ultra-Aeron. It was mentioned in 1282 (Soulsby, 1983, 254) and may be coeval with the foundation of a small town at Trefilan in the 13th century (ibid.).

In 1998 St Hilary, Trefilan, was a parish church. The living was a rectory, held with Llanfihangel Ystrad, Cilcennin and Nantcwnlle (Benefice no. 698) in the Archdeaconry of Cardigan, Rural Deanery of Glyn Aeron (St Davids, 1997-8).

The ‘Hilary’ dedication may be derived from the place-name ‘Ilan’ (the hundred within which Trefilan lies) which was confused with Ilar, the Welsh form of Hilary (Various, 1994, 392). Rees, 1932, gives the medieval dedication as  St Mary.