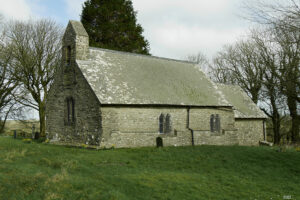 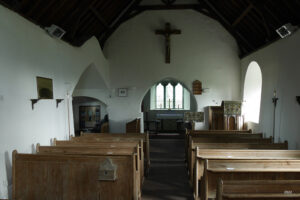 Reason for listing: Church is first mentioned ca 1290 and parish was united with Llandeloy from at least 1302.

The present church consists of a 2-bayed chancel, a wider 2-bayed nave and a single bayed north transept with a large skew passage occupying its entire east wall. Construction is in medium-sized limestone rubble, unsquared and uncoursed, with crude medieval quoins; good repointing, later 20th century; internal render/plaster, later 19th century. The church is entered through a north door. Roofs are slated gables, the nave always roofed at a higher level; the vaulted skew passage is lean-to roofed at the same level as the chancel.

The nave south wall exhibits a wide, low, sloping, slated offset marking the level above which the wall has been rebuilt, pre-later 19th century?; the end walls project beyond the face of the rebuilt section as slight buttresses, and the offset is cut out around the (lower) window sills. The 2 south wall windows, and the west wall window are all of 2 lights but otherwise as the chancel window including semicircular-headed embrasures, suggesting later 19th century insertions into earlier openings?. The original facework beneath the offset does not exhibit any scar relating to the adjacent truncated return? wall (see above). The north door occupies the west bay and has a rounded 2-centred rear arch, like the chancel arch and probably also 13th century; the 2-centred Caerfai stone surround is later 19th century. To the east of the door is an internal corbel for the former rood-loft. The external north wall-top slopes back, where the wall has been heightened?, and there is a basal medieval offset, which extends around the west wall (possibly medieval footings later finished off?). The west wall carries a gabled single bellcote of roughly squared and coursed rubble; vertical joints and a crude shallow string-course mark the junction where the bellcote has been inserted into the gable, but the structure, with its circular-headed opening, is medieval, 14th-15th century?. The nave roof is like that in the chancel, later 19th century; floored as the chancel east bay throughout, without suspended timber floors.

The north transept is entered from the nave east bay through a plain arch with a segmental head, probably 14th century, the voussoirs of which represent the wall-head at a higher level than the rest of the nave north wall. The north wall is pierced by a window like those in the nave and of the same date. There is a blocked medieval slit light in the west wall. The transept is vaulted, with a depressed 2-centred barrel-vault of the same 14th century date as the fabric. It is floored as the nave.

The skew passage has segmental arches to both the chancel west bay and the north transept east wall, probably 14th century; the former arch rises above wall-top level as in the nave, the latter with a plain, rounded impost on the southern arch stop. The passage outside wall has a concave internal curve like that at eg. Llanstinan. This face displays a square recess, possibly a disused flue for a former stove. The passage has a segmental barrel vault, as the rest of the fabric, and is floored as the chancel east bay.

A medium-deep, earth-cut cutting surrounds the church, primary, secondarily deepened?, exposing the north transept and skew passage footings. There is no evidence for floor level changes. The floors are not suspended and there is no underfloor void. No internal crypt/vault is evident. There is structural evidence for a possible component against the south wall, south transept? (see below). Memorials lie significantly close to the east wall.

The church has a simple 3 celled plan retaining most of the medieval fabric and arrangements. The nave and chancel may be contemporary and the form of the chancel arch suggests an early 13th century date. The vaulted north transept with its large skew passage is probably 14th century. A stump of truncated masonry in the form of a return wall against the centre of the external face suggests the possibility of a former component, a south transept?; no component is shown in this location on the (reliable) tithe map (NLW, Llanhowell, 1845). The north door appears to have always been the only entrance into the church.

A churchwardens’ presentment of 1678 submitted that the church was ‘kept in good repair’ (Jenkins, n.d., 9). The nave south wall was rebuilt during the later 19th century restoration according to Jenkins (Jenkins, n.d., 14); however, the semicircular-headed window embrasures within the rebuilt section suggest that the rebuild occurred at an earlier date, probably during the 18th century. The flagged flooring may be re-used from the 18th century.

The church was subject to low impact restoration in the later 19th century when all the windows, the north door and the timber roofs were rebuilt (Jenkins, n.d., 14); neither the date, nor the architect responsible, are known. The roofs are without tabling. The chancel east bay floor is tiled, while the remainder of floors may re-use earlier flags. New seating of loose softwood pews was provided, and 2 similar benches in the chancel. The pulpit and desk were fitted.

There has been some further work. The altar rail and table may be early 20th century. The organ is from 1820-50; it was purchased in 1975 (Jenkins, n.d., 15) and installed in the nave west bay. The exterior of the church was entirely repointed in the later 20th century.

The limestone font has a square cushioned bowl, a cylindrical stem and a square base, and is of Transitional form (Barnwell, 1880,  215) from the early 13th century.

(The ECM free-standing in the church bears a Latin inscription; it is not in situ, having been brought from the now-closed church at Carnhedryn (Anon., n.d.) and originally from Carnhedryn Farm.)

Reason for listing: Church is first mentioned ca 1290 and parish was united with Llandeloy from at least 1302.

St Hywel, Llanhywel, was a parish church during the post-conquest period, of the medieval Deanery of Pebidiog (Rees, 1932). The advowson had been held in chief by the crown but in 1302, the benefice was appropriated by Bishop David Martin to the Chapter of St Davids Cathedral (Green, 1912, 247) to provide three chantry priests to say Mass for the soul of the king. The appropriation was not licensed until 1313 when, along with Llandeloy Church, Llanhywel was appropriated for the provision of the chantry and for services to the king, William de Valence and John Wogan of Picton Castle (ibid.).

A quarter of the advowson had already been purchased from one Vachan ap Kedmor ap Philip, by Thomas Bek, Bishop of St Davids 1280-93 (ibid.). Llanhywel, as ‘Ecclesia de Lanowel’, was assessed at £6 for tenths to the king in 1291, the sum payable being 12s (ibid.).

Llanhywel is known to have been formally annexed to the vicarage of Llandeloy by 1490 (ibid.), but the union appears to be earlier. The tithes of the united benefice were leased to a variety of individuals in the ensuing centuries (ibid.); the patronage remained with the Cathedral Chapter. In 1536 the annual value of ‘Llandeley and Llanhowell’ vicarage was £4 13s 4d, in tenths 10s (ibid.).

In 1998 St Hywel, Llanhywel, was a parish church. The living was a vicarage, held with Llanrhian, Carnhedryn and Llanrheithan (Benefice 653) in the Archdeaconry of St Davids, Rural Deanery of Dewisland and Fishguard (St Davids, 1997-8).

Jenkins, R. M., n.d., A Pembrokeshire Pilgrimage: A History of the Church and Parish of Llanhowell.