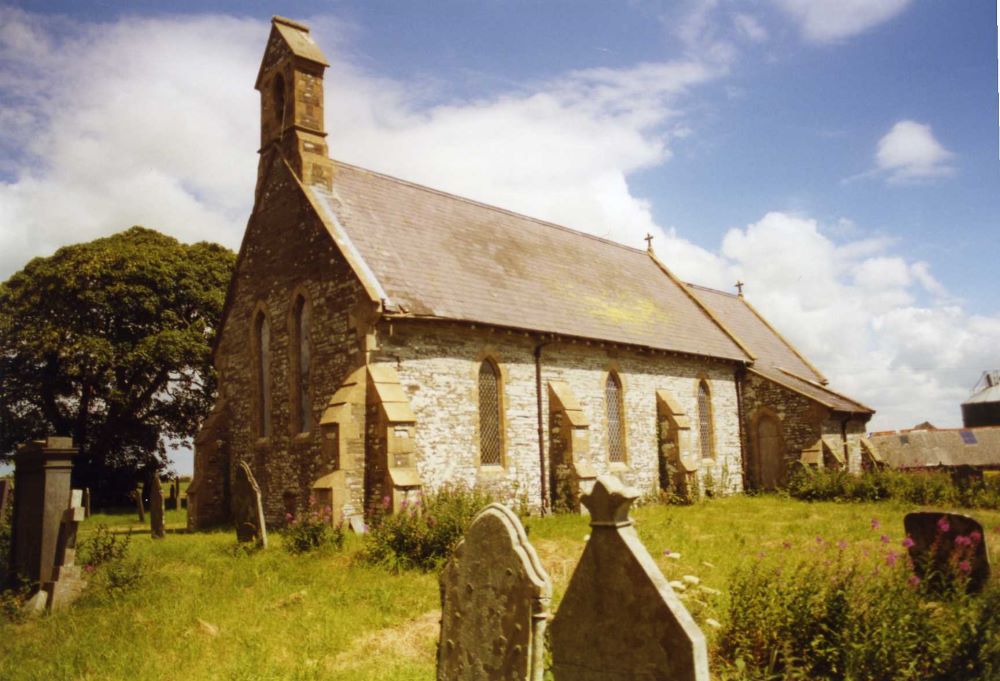 Archaeological potential – excellent. Church entirely rebuilt in 1883-4, not in same location as earlier church; extensive structural and physical evidence for earlier church; earthwork platform beneath 100% of church: no external cutting or drain around church; underfloor void; no crypt/vault evident.

St Illtud, Llantwyd, is a 3-celled church, of medium size. It was built new in 1883-4 under the architect David Davies of Llandysul (NLW, SD/F/428), on the site of the earlier church, but not in the same location, lying immediately to the north.

The present church consists of a 2-bayed chancel, a 3-bayed nave, a north porch and a lean-to vestry of 1 bay, against the south wall of the chancel west bay.

Construction is in slate ashlar throughout, with oolite quoins and copings. The external pointing is good quality, from 1883-4. All internal walls are rendered/plastered. All dressings are in oolite; the detail is all from 1883-4 and neo-gothic. It includes the windows, with plain 2-centred surrounds, and the 2-centred north door, vestry door and north porch door. The church is buttressed throughout, 1883-4. Western gabled bellcote with a single 2-centred opening, 1883-4. The roofs are slated gables while the vestry has a slate lean-to roof, 1883-4. The floors are suspended except in the porch, and from 1883-4.

The church was constructed at a cost of £690 immediately to the north of the earlier church, which was demolished to make way for it; this was apparently in order that ‘the vestry can be built on the south side of the chancel without disturbing graves’ (NLW, SD/F/428). An area of disturbed slate slabs can be seen on the surface of the yard immediately south of the new church and extensive irregularities mark the site of further buried walls.

A number of mouldings were preserved from the earlier church and refixed within the new building. They comprise a plain stoup, and 2 corbels carved with male faces, which were set within the north porch. A limestone coffin lid is mounted against the nave west wall; it bears an incised cross, the arms of which are enclosed within a design of fleurs-de-lys, stylistically belonging to the 14th century (RCAHM, 1925, 181).

The new church stands on a pronounced earthwork platform, established in 1883-4. No external drain or cutting is present, but a concrete plinth of 1883-4 runs around the entire church. There is an underfloor void beneath the suspended floors, but no vault or crypt is evident.

The form of the pre-1883 church is impossible to determine from the field evidence as it can be seen. It is depicted on the tithe map of 1838 (NLW, Llantood, 1838) as a medium-sized edifice comprising a single cell, without any structural division into chancel and nave; this may not, however, be an accurate representation. According to a churchwardens’ presentment of 1684, the church was then ‘in good repair’ although the seating had been the cause of strife between two gentry families (Evans, 1935, 395). More than one bell appears to have been present, and an ‘ancient bell’ that once belonged to the church was apparently displayed to the Cambrian Archaeological Association in 1859 (Anon., 1859, 349). Samuel Lewis, writing in 1833, described the church as ‘not distinguished by any architectural details of importance’ (Lewis, 1833).

The font has a square basin recovered from the pre-1883 church, of broadly medieval date; the stem and base are of 1883-4.

St Illtud, Llantwyd was a parish church during the post-conquest period, of the medieval Deanery of Cemais (Rees, 1932). The living was a vicarage, appropriated to St Dogmael’s Abbey (Green, 1912, 259).

In 1833 the living was a discharged vicarage of the Archdeaconry of Cardigan, annexed – with that of Monington – to the vicarage of St Dogmael’s (Lewis, 1833). It was endowed with £200 royal bounty.

In 1998 St Illtud, Llantwyd, was a parish church. The living was a vicarage, held with Cilgerran and Bridell (Benefice 644) in the Archdeaconry of Cardigan, Rural Deanery of Cemais and Sub-Aeron (St Davids, 1997-8).

(It has been suggested that the ‘Illtud’ dedication, not existing within a strong local tradition, is not original (RCAHM, 1925, 181), being instead a corruption of the 1536 form of the place-name – ‘Lantwyd’ – which has now been adopted as the authorised spelling.)