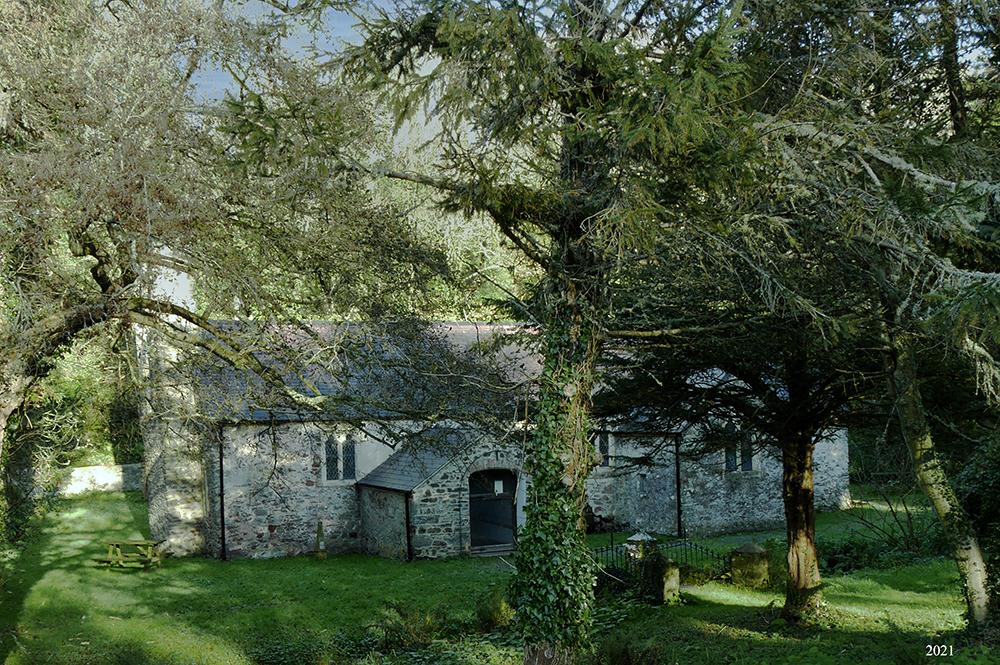 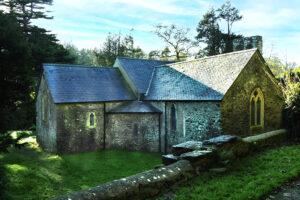 The present church consists of a 2-bayed chancel, a 4-bayed nave, a 2-bayed north transept with a skew-passage, a single-bayed south transept with a skew-passage, and a south porch. Construction is in Old Red Sandstone rubble. The chancel arch, transept arch, skew-passages, a window, the piscina, stoup, ?aumbry, and blocked north door are medieval. The western gabled double bellcote and buttress, some windows, and a tomb-recess, are from c.1600. The south door and porch doors are later 18th – early 19th century. Other openings are mainly from the 1850s, in neo-Gothic style, with yellow oolite dressings. There are extensive remains of 18th-early 19th century external render, with much poor 20th century repointing, some of it ribboned; the interior is plastered. Roofs are slated gables.

The chancel is not quite regular in plan, narrowing to the east wall, which is quoined. The east window has a 2-centred embrasure that may be medieval; the cusped 2-light window with a central quatrefoil has a 2-centred surround in chamfered yellow oolite, with infill, from the 1850s?,  in imitation of a 14th century original (see Structural Development below). The east bay side walls each feature a window. That to the north is has a segmental, medieval embrasure and Old Red Sandstone lintel; the cusped, single lancet itself is in chamfered yellow oolite from the 1850s. The window in the south wall has a similar embrasure and 2 lights, with cusped 4-centred heads in a square surround of cavetto-moulded oolite from the 1850s. Beneath this window sill is a piscina consisting of a plain, semicircular bowl, medieval, with drainage. The plain 2-centred chancel arch is medieval, probably from the 14th century; the square stops each feature a wide, plain offset towards the base of the arch, probably associated with a former rood-screen, and there is an overhanging offset just above the head of the arch on the east face. The softwood, collar-rafter roof is from the 1850s and is arch-braced from contemporary, timber wall-’corbels’, with matchboarding. The quarry-tiled floor is from 1884 and may have been raised.

The nave is lit by 2 windows in the north wall and 3 in the south wall, in square embrasures, medieval?, early post-medieval?; the windows all have 2 cusped lights with sunk spandrels, in square surrounds with cavetto-moulded labels in yellow oolite, from the 1850s, imitating the original openings?. The north wall windows, and the west bay south wall window, have surrounding infill from the 1850s. The south door has a medieval, segmental rear-arch and a rounded segmental outer arch, in brick, from the later 18th – early 19th century; internally, to the east, is a stoup with a plain, semicircular recess and an octagonal limestone bowl from the 15th century. In the opposite wall is a blocked north door with a similar, contemporary rear-arch and a plain, rounded, 2-centred head from the 13th-14th century.  The west, gable wall carries a large, gabled double-bellcote on a deep buttress, and corbelled out from the internal face; The 2 openings have one-piece semicircular heads in limestone from c.1600. A window pierces the buttress at a high level, with a semicircular embrasure from c.1600; the 2-centred surround and plain ‘Y’-tracery, in chamfered oolite, are from the earlier 19th century. Either side of the buttress, at a lower level, is a plain lancet in yellow oolite, with concrete embrasures, from the 20th century. Internally, The south wall of the east bay, east of the transept arch (see below) features an offset at window-sill level, becoming vertical along the western jamb and probably associated with a former rood-screen/loft. The nave is roofed as the chancel, also from the 1850s. The passages are quarry-tiled as the chancel, with an underground chamber for a former ‘Porritt’s’ stove, from 1884, with 20th century quarry-tiles beneath the seating, over blocked heating ducts.

The unquoined, 2-bayed north transept is entered from the nave through a plain, full-centred semicircular arch from the 15th century?. It is lit by a 2-light window in the north wall, like the chancel east window but without the drip-mould and similarly from the 1850s. There is also a single lancet in each of the side walls, like the nave windows but single-light and also from the 1850s. The eastern window interrupts the southern half of a blocked window whose segmental head, medieval?, is visible externally. Stones, projecting from the external face of the south end of the west wall, may be associated with a former rood-stair ‘turret’. The softwood, collar-rafter roof is from the 1850s, with matchboarding, Floored as the nave. Small, semicircular-headed openings at the foot of the side walls, blocked to the east, may have led to a burial vault.

A plain, full-centred semicircular arch in the east wall of the transept southern bay, from the 15th century?, leads into a skew-passage. The passage has an irregular ‘corbelled’ barrel-vault, over which is a slated lean-to roof to chancel eaves level. It emerges in the chancel as a similar plain, full-centred semicircular arch, and is lit by a single, uncusped lancet in a chamfered limestone surround and square embrasure from the later 15th century? in the outside wall; immediately to the east is a plain, square, splayed recess, an aumbry?.  over a deep chamfer rather than as a ‘real’ arch.

The south transept is smaller and narrower than the north transept. It is open to the nave, spanned by a masonry lintel that rests on a corbel in the eastern stop. It is lit by a 3-light window in the south wall, like the chancel east window and similarly from the 1850s.  The east wall is pierced by a window, from c.1600, of 2 square-headed lights in a square surround in chamfered limestone; a similar window, also from c.1600, lies in the west wall but is single-light and lies in a contemporary full-height, segmental-headed recess. Internally, a square recess occupies the south-west corner, from c.1600 and possibly associated with an altar, as a mortuary chapel; an empty tomb-recess, with a plain segmental head from c.1600 lies, beneath the south window. Roofed as the chancel and nave, from c.1850. Floored as the nave.

A plain segmental arch in the east wall of the transept, from c.1600, leads into a skew-passage. The passage is unvaulted and features an unusual, unquoined right-angled return to the chancel south wall, similar to that at Rosemarket, Pembs. It emerges in the chancel as a similar plain, segmental arch and is lit by a single, square-headed light in a square surround of chamfered limestone from c.1600. It has a slated lean-to roof to chancel eaves level, with softwood rafters.

The south porch entry is like the nave south door, in brick from the later 18th – early 19th century. Internally, a medieval stoup with a square, chamfered bowl lies in a plain recess in the north-east corner, not closely dateable. The softwood roof is lake those in the chancel and nave, from the 1850s. The polychrome-tiled floor is from 1884 and laid directly on the substrate.

A deep, wide cutting, from the 1850s, runs around the north-west side of the church; a medium-depth, narrower cutting, partly stone-lined, runs around the north-eastern side, exposing footings to the east. Floor levels may have been raised throughout. There is a below-ground heating chamber in the nave. The nave and transept floors were formerly suspended over heating ducts. A burial vault may lie beneath the north transept. No external memorials lie significantly close to the church.

Much of the church cannot be closely dated. The nave may be 13th or 14th century. The chancel appears to have featured a Decorated east window (see below) and may have been rebuilt in the later 14th century when the south porch may also have been added. The transepts appear to be late, post-dating main period of transept construction in the region. The north transept may be later 15th century (or even later); the south transept detail is all from c.1600 when it appears to have been added as a mortuary chapel; the western bellcote may be contemporary.

The south door, and south porch doorway, were rebuilt in the late 18th -early 19th century. The church is depicted with the same ground-plan as at present on early 19th century maps (NLW, St Ishmaels tithe map, 1839, et. al.).

The church was restored in the 1850s (Glynne, 1885, 210-211) when it appears to have been refenestrated, reroofed and refloored; the floors may have been during this period. The restored church was visited, in 1856, by Glynne who called the restoration ‘not quite satisfactory’ (ibid.); he described the east window as ‘Decorated’, and it may have undergone subsequent restoration. Glynne noted ‘square recesses either side of the altar’ for which there is now no evidence; he may have been referring to the south transept. All other details were as today.

It was again restored in 1884. The Diocesan records suggest that the faculty, SD/F/606, was not granted, but the sources are agreed that it west ahead (Anon., 1903, 279; Glynne, 1885, 211). The restoration, to the designs of the architect D. Thomas of Haverfordwest, was very slight; under the terms of the faculty ‘the whole of the church is to be repaired, with a new pulpit and reading desk, and that the chancel and aisles should be paved with tessellated tiles’ (NLW, SD/F/606). It appears that the church was reseated Glynne, 1885, 211).

There are 2 Jacobean chairs in the chancel, from the early 17th century. The softwood altar rail is from the 1850s or from 1884. An elaborate, wrought-iron stove jacket lying loose in the nave may be from the 1850s. The oolite pulpit, with Purbeck marble shafts, and the softwood pews, are from 1884 (NLW, SD/F/606); the glazed, oak vestry screen in the north transept is probably contemporary. The panelled oak altar table is later 20th century.

The ?oolite font has a square, scalloped bowl, a cylindrical stem with a cable-moulding, and a square base, from c.1200.

In 1833 the living was a vicarage rated in the king’s books at £6 12s 8½d , endowed with £200 royal bounty and in the patronage of the king (Lewis, 1833). The tithes were divided into 3 equal portions, one of which was appropriated to the corporation of the borough of Tewkesbury, the second to the incumbent of Tewkesbury parish, and the third to the vicar of St Ishmaels (ibid.). The livings of St Ishmaels and Hasguard were united in 1877 (Green, 1913, 295).

In 1998 St Ishmael, St Ishmaels, was a parish church. The living was a vicarage held with Herbrandston and Hasguard (Benefice 823) in the Archdeaconry of St Davids, Rural Deanery of Roose (St Davids, 1997-8).

Wray, A., 1870, ‘The Reputed Refuge of the Anchorite Caradoc’, Archaeol. Cambrensis, Vol. I, Fourth Series.