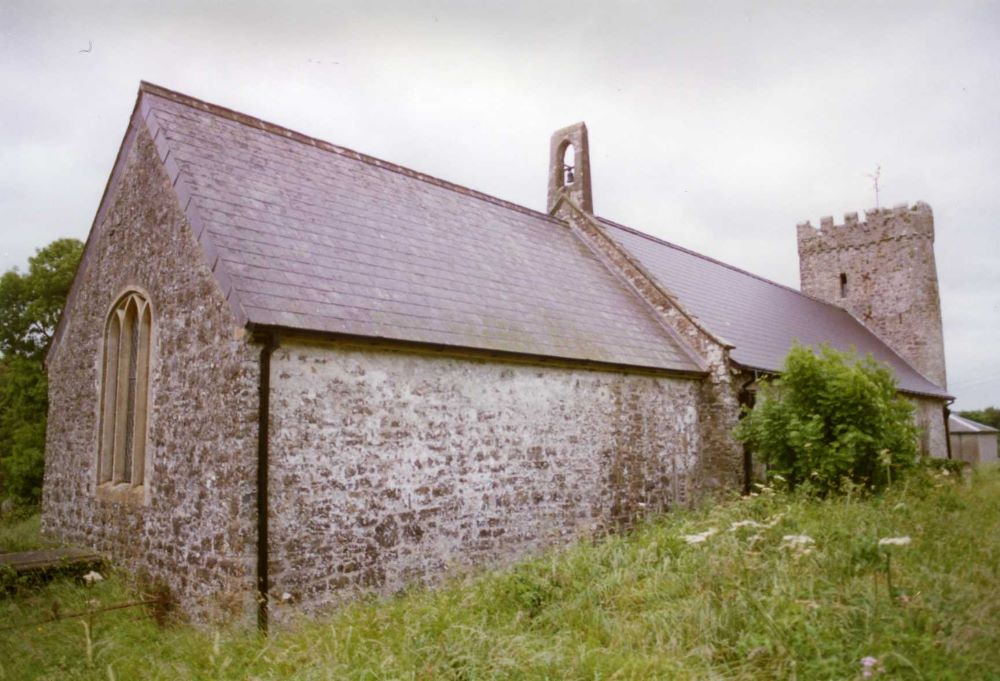 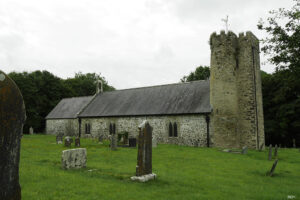 The present church consists of a 3-bayed chancel, a wider 4-bayed nave and a 2-storey west tower. Construction is in medium-sized limestone rubble throughout, unsquared and uncoursed, with medieval limestone quoining in the west tower only. Good pointing, 1883-4, with areas of surviving 18th century render and some 20th century ribbon pointing. The internal walls are rendered/plastered; pre-1883 plaster survives in the chancel. Roofs are slated gables, the nave always having been roofed at a higher level than the chancel; the tower roof was not seen.

The church largely follows its medieval arrangements, but most of the openings, except in the tower, have been rebuilt. It was entered through north and south doors in the nave, still open, but there is no west door. A south chapel and ?transept were formerly present, but have been removed. The church is remarkable for its length.

A deep-very deep, wide cutting surrounds the church, mainly primary but secondarily deepened in 1883-4, and concrete-lined, exposing the nave footings. The level of the medieval door sill suggests that internal levels are unchanged in the body of the church, but the tower floor has been lowered. There is no underfloor void. No internal crypt/vault is present. A south chapel and ?transept formerly existed.

The nave and chancel are little altered and the Early English former east window, replaced between 1877 and 1883 (see below), was an unusually early architectural feature in the region, suggesting a 13th century date for both – a relatively early date made possible, also unusually, for such a large structure.

Medieval features now present in the chancel include a blocked window in the south wall of the central bay, with a full-height, segmental-headed internal recess and a surviving 2-centred surround of 2 lancets, probably 15th century; it was blocked prior to 1877 (Allen, 1877, 218). A corresponding area of blocking in the north wall may or may not represent a former window. There is a piscina in the south wall, with an ogee-moulded surround but without a bowl, of the ?15th century. Medieval benching survives in the chancel central bay, and crude corbel, for a former roof truss?, on the north wall. The upper half of the north wall of the west bay exhibits an internal recess, with a half-arch and cut-out to the west wall for a former rood-loft stair; the stair recess was formerly lit by a single lancet window of broadly medieval date, blocked before 1877 (ibid.). The chancel arch is probably contemporary with the core fabric, and therefore 13th century; it is plain and 2-centred. To its north lies a square-headed doorway, blocked before 1877 (ibid.) leading from the stair recess, and rood-loft corbel survive to the south, and on the nave east bay side walls. On the upstand lay a medieval sanctus bellcote; it had gone by 1877 (ibid.), but was rebuilt, and the ‘old bell’ was re-used, in 1883-4 (NLW, SD/F/70); date of bell?

A blocked arcade in the south wall of the chancel west bay led to a former south chapel; the arch is 2-centred and full-height. The chapel had gone by 1877 (Allen, 1877, 218) but was probably removed long before (see below) – the tithe map is of little assistance being highly conventionalised (NLW, Camrose, 1839). The blocking is pierced by a window from 1877-83 (see below), that has succeeded a sash-window (Allen, 1877, 218).

The nave retains some medieval features. A similar arch lies in the south wall of the east bay, that communicated with a former component; the ragged finishing of the nave south-east corner indicates that a wall butted here, suggesting that the component was separate from the former south chapel, and therefore a transept; this need not, however, necessarily have been the case. The arch voussoirs lie beneath external render of possible 18th century date, by which time the component (and doubtless the south chapel, if separate) had gone; the blocking itself was rebuilt or repointed in 1883-4, and pierced by a window. Both north and south doorways are still open; the south door retains its 2-centred limestone surround of 13th-14th century date, but the north door was rebuilt in 1883-4; all windows and other detail are also from 1883-4.

The west tower is of 2 storeys (RCAHM, 1925, 46) and has retained most of its medieval fabric, of 15th century date; it is not tapered and lacks the basal batter and string course characteristic of the district. A polygonal spiral stair turret projects from the east end of the north wall; it is of smaller limestone rubble and may be a 16th century addition. The turret is entered from the nave by a square headed door with a sill probably always above floor level, and lit by simple slits. A plain 2-centred arch divides the tower ground floor from the nave, and the barrel-vault is contemporary with the core fabric. The floor is tiled as the nave, and at the same level; exposed internal footings demonstrate that it has been lowered, before 1883?. Openings are confined to the stair turret and the belfry, which is pierced by plain square single openings in all four walls; a blocked light formerly opened into the nave roof space (RCAHM, 1925, 47). There is a crenellated parapet on a plain corbel table, also 15th century, but the parapet was partly rebuilt in 1883-4. A rainwater chute is in the form of a gargoyle, also 15th century. The tower is in good condition.

The pre-restoration church was subject to a lengthy description in 1877 (Allen, 1877, 214-223). The medieval arrangements had largely survived (although the south chapel and ?transept had gone), but much of the detail in the body of the church had been altered. The windows had largely been replaced by the ubiquitous sashes, ‘of the early 19th century’, and the chancel south window had by now been blocked. The chancel east window, however, was a rare survival of a ?13th century 3-lancet window (illus. p220), with mullions displaying internal beading, all now gone. The interior was plastered, some of which survives especially in the chancel. The nave was roofed in oak, with collar-rafter trusses with moulded arch-braces, of medieval date? The present chancel roof was of ‘recent’ construction in 1877 and features oak scissors-braced trusses with moulded struts. The present chancel floor, of limestone flags, may be 18th-earlier 19th century.

There was evidently some work between 1877 and the 1883-4 restoration, when the medieval east window was replaced by a 2-centred opening with 3 lights, and Y-tracery, in oolite. A similar window, with a brick head, was inserted in the infill in the chancel west bay south wall.

The church was restored in 1883-4 (NLW, SD/F/70), following specifications by the architect John P. Seddon, of London. The restoration as planned created some dissent, due to which the proposed north porch, a structure ‘out of place’ for region, was not built, and the design for the sanctus bellcote was modified (Anon., 1882, 324). The restoration as undertaken was low-medium impact and largely concerned the nave. The nave east and west wall tops were rebuilt, and the tops of the side walls for the simple oolite roof corbels. The single sanctus bellcote was built new, as a replica of the old?; it is simple and square, with a 2-centred opening, and the old sanctus bell was rehung. The nave was refenestrated with neo-gothic 2-light windows, with 2-centred limestone surrounds. The north door was rebuilt with a replica 2-centred surround. The nave was replastered, and only damaged plaster was to be removed. It was reroofed, with a softwood tie-beam roof with king-posts, and arch-braced collars. Tabling is on the nave east wall only. New flooring included tiling the passages and inserting herringbone woodblock, not suspended, beneath the new softwood seating. The chancel west bays were probably given their polychrome tiled surface at the same time. The pews and stalls are of softwood and free-standing; a new altar rail, pulpit and softwood tower screen were fitted. The proposed chase for the vertical flue, from a free-standing stove in the nave, to be cut in the tower south wall, was not undertaken.

There has been little further work on the church, apart from some external repointing.

The limestone font is medieval, with a square scalloped bowl, cylindrical stem, and square base, all massive and of 12th century date.

At the dissolution the advowson fell to the crown. In 1543 Arnold Butler of Johnston obtained a 21-year lease of the ‘rectory’ of Camrose from the king (ibid.), and 2 years later a member of the royal household obtained a lease of the tithes of the rectory.

In 1998 St Ismael, Camrose, was a parish church. The living was a vicarage held with St Lawrence, Ford and Hayscastle (Benefice 636) in the Archdeaconry of St Davids, Rural Deanery of Roose (St Davids, 1997-8).

The Sites and Monuments Record for Carmarthenshire, Ceredigion and Pembrokeshire has an additional/alternative dedication to St Ambrose.