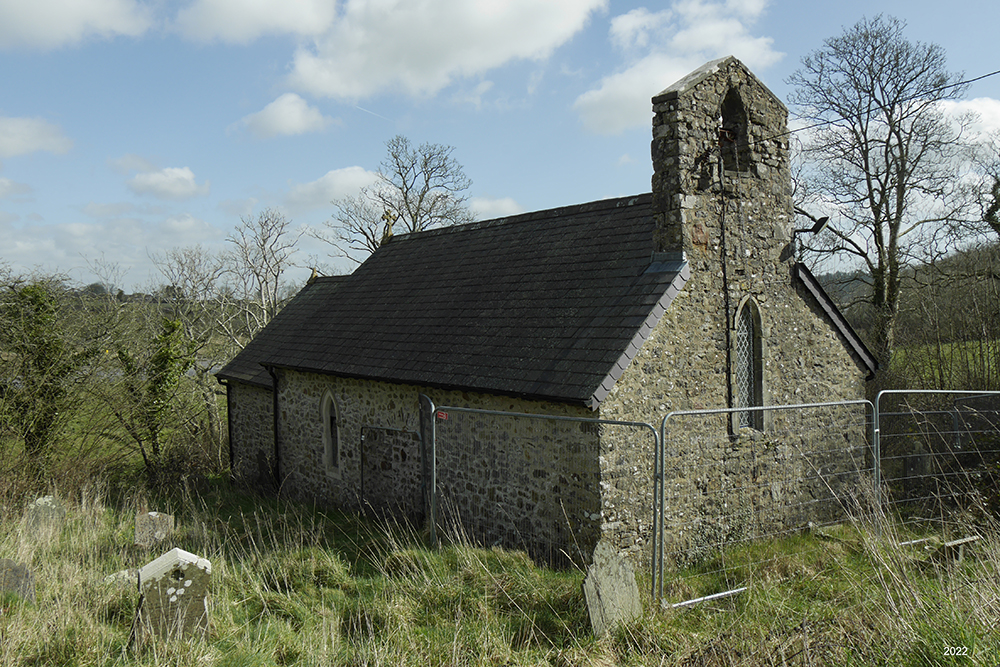 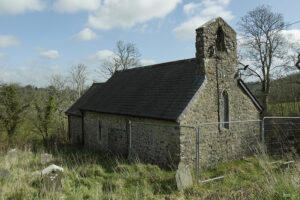 The present church consists of a 2-bayed chancel, a wider 3-bayed nave and a south porch. Construction is in medium sized limestone rubble, unsquared and uncoursed and quoined in areas. Fair 20th century pointing and some poor late 20th century repointing. The internal walls are rendered/plastered, 1893-4. Roofs are slated gables, the nave probably always roofed at a higher level than the chancel, but there is now no chancel arch.

The chancel east wall has an external basal batter; the east window is from 1893-4. The south wall of the west bay is pierced by a square window opening that may be pre-1893, but not the present single light. The west ends of the side walls exhibit internal vertical offsets beneath the present plaster, probably marking the junction of a former west wall and chancel arch; the chancel arch had gone by 1893 at the latest.

The main entry into the slightly wider nave was from the south, but there is a blocked north door opposite, with a segmental head of 13th-14th century date, possibly blocked at the Reformation. The south door has been rebuilt. Internal stone benching runs around all 3 walls of the nave west bay, of medieval date. The west wall carries a single bellcote with a low gable and a plain, triangular headed opening, medieval or 17th century?; there is a bell. The 3 nave windows are from 1893.

The south porch side walls also have internal stone benching, medieval, with later seating. The door was entirely rebuilt in 1893-4.

A wide earth-cut cutting runs around the external walls, very shallow around the east end but becoming deeper towards the west where it is cut into the natural slope, and it is deep around the west end; it is mainly primary, but footings are exposed in areas throughout. There is no evidence for floor level changes. The floors are not suspended, and lack an underfloor void. No internal crypt/vault is evident. There is no evidence for any former components beyond the present walls.

The simple layout of chancel, nave and south porch is unchanged from the medieval period. The chancel is inclined to the north. The nave may be the earliest component, being quoined while the chancel and porch are not, and it may be 13th century in origin. The chancel may be 14th century, while the porch, which butts against the nave, might be 14th or 15th century – in the absence of detail, closer dating is impossible. Sources suggest that the entire fabric may have been subject to extensive rebuilding in the late 17th century (see below), but this does not appear to be reflected in the fabric.

The few contemporary records of the church in the early post-medieval period are unusually informative and suggest that it lay derelict for nearly 100 years. In c.1594, George Owen of Henllys wrote that the church was ‘in ruins’ (Green, 1911, 308). There appears to have been little more to record until 1683, when the will of Sir Herbert Perrott contained the clause ‘I…have lately re-edified and built again the decayed church of St Ismaels of Haroldston’ (Barnwell, 1866, 510). This suggests that the present fabric may be substantially 17th century, but there is no real structural evidence for this apart, possibly, from the bellcote (see above); it may, however, provide a context for the loss of the chancel arch.

According to Richard Fenton, writing c.1811, ‘the little church of Haroldstone (St Issells) has nothing to recommend it to notice’ (Fenton, 1903, 128). A plain, small west gallery was installed before 1844 (research by R. Scourfield, mounted in church porch) and the church was reseated with new pews, and painted, in 1854 (ibid.). In 1864 extensive repairs were undertaken, ‘in keeping with the structure which makes no pretension to architectural grandeur’ (ibid.), including the repair and alteration of the pews, some reglazing (now gone) and a new altar table. The seating on the south porch benching may relate to one of these episodes.

The church was restored in 1893-4 (ibid.) to plans and specifications by the architect E. H. Lingen Barker, ‘of Hereford’. The restoration was of medium impact, little wall rebuilding having occurred and no new components added. The church was given new neo-gothic windows. The chancel east window is of 2 cusped lights with a cinquefoil-pierced spandrel, in a 2-centred surround and drip-mould on ‘acanthus’ stops, all de novo. The single oolite lancet in the chancel south wall possibly occupies an earlier opening (see above) and there are 3 similar, but inserted, windows in the nave. The south door was entirely rebuilt, with a 2-centred surround, as was the south porch door. Interiors were replastered, but the extent of the removal of the old is unknown. The entire church was reroofed in softwood, the chancel with a ‘wagon-roof’ ceiling, the nave with collar-rafter trusses arch-braced from the side wall corbels, and the porch common rafters all with collars. There is no tabling. The church was refloored, the chancel and nave in quarry tiles, with woodblock solid floor; the porch was tiled directly on the substrate. It was also reseated with new softwood pews, and softwood stalls incorporating a desk; an altar rail was installed, and the former credence shelf has left an impression in the plaster.

There has been little further work beyond the 20th century repointing. The hexagonal oak font is later 20th century.

The old font remains in position. It is limestone, with a square bowl, cylindrical stem and square base, of the 12th-early 13th centuries; it has been retooled.

No longer an active church.

St Ismael, Haroldston St Issells, was a parish church in the post-conquest period (Rees, 1932), of the medieval Deanery of Rhos. In 1291 the church, as ‘Ecclesie Ville Haraldi juxta Haverford’, was assessed at £2 for tenths to the king, the sum payable being 4s (Green, 1911, 307-8). The benefice appears to have been in the patronage of the Lords of the Manor of Haroldston until granted, in the 15th century, to Haverfordwest Priory, by one of the Perrott lords (Barnwell, 1865, 20). There was no separate valuation in the ‘Valor Ecclesiasticus’ of 1536, when it was assessed along with Haverfordwest Priory, but the joint valuation was £11 (Green, 1911, 307-8)

At the dissolution the priory and its appurtenances, including Haroldston St Issells Church, fell to the king. The advowson appears, at some period, to have been purchased by the Perrotts of Haroldston, but in c.1553 the parsonages of Haroldston St Issells and Haverfordwest St Thomas were in the hands of one Thomas Jones (Barnwell, 1865, 121), a link with Haverfordwest St Thomas that has continued into the 1990s.

In 1998 St Ismael, Haroldston St Issells, was a parish church. The living was a vicarage held with Haverfordwest St Thomas and Haverfordwest St Mary (Benefice 648) in the Archdeaconry of St Davids, Rural Deanery of Roose (St Davids, 1997-8).