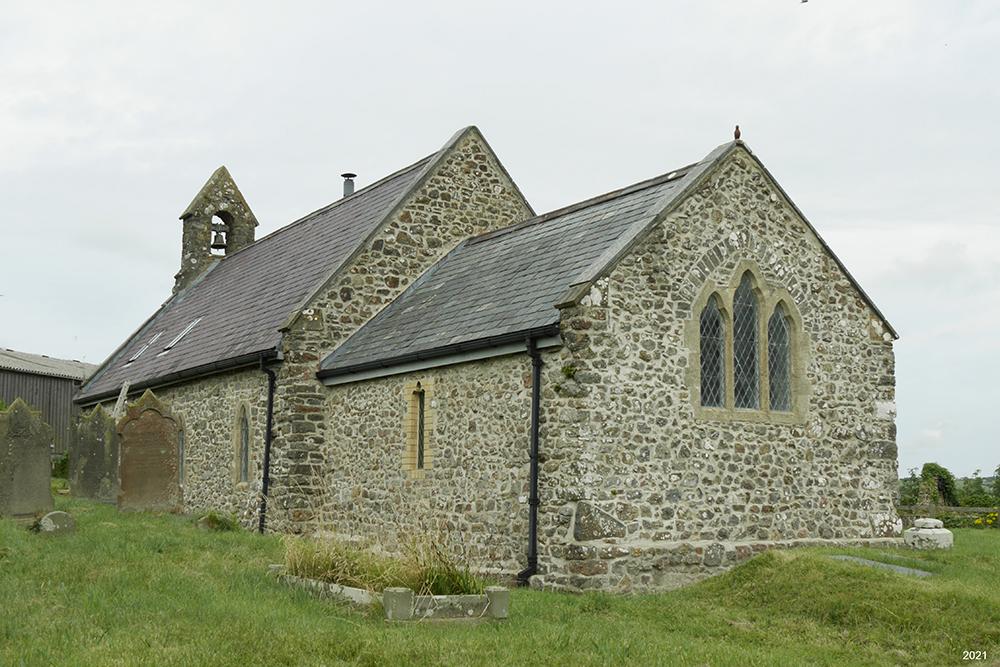 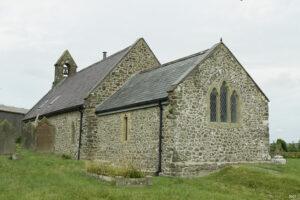 Reasons for Listing: Included as a small parish church of medieval origins which has retained its distinctive character.

The present church consists of a 2-bayed chancel and a wider 4-bayed nave. Construction is in medium-sized limestone rubble, unsquared and uncoursed, with crude quoins, medieval?; areas of 18th century render remain, with 1890s ribbon pointing and good repointing from 1915. Internal render/plaster, 1890s and 1915. The church is entered through a south door. Roofs are slated gables, the nave always roofed at a higher level.

The chancel east and south walls exhibit a plain low offset, medieval, and at the base a concrete ‘plinth’ from 1915. The lower quarter of the side walls have highly irregular facework which may indicate medieval ground level, or the line above which the walls were subsequently rebuilt? (but before the 18th century; the entire north wall lies beneath render). The east window is a cusped triple lancet, of oolite and from the 1890s; the 4-centred rear arch may be 16th century. A window in the west bay south wall has a single lancet with a trefoil head in yellow brick, from 1915? or 1923?. Internally, the east bay south wall has a concrete plinth and slab with a plain-bowled piscina, possibly from 1923 (see below). The plain 2-centred chancel arch is fairly low, 13th or 14th century and to the north is a socket and, at springer level, a blocked door (beneath the plaster) to the former rood-loft; 2 corbels at the apex of the west face supported the former rood-beam. The softwood chancel roof has a through purlins with scissors-braced common rafters and ashlar posts, from the 1890s. The flagged and large-tiled floor may be 18th or earlier 19th century.

The nave side walls are similar to the chancel side walls but are more even and lack render; the north wall has the low offset, but the wall-head was rebuilt in the 1890s. The west bay north wall retains a cusped medieval lancet with a square limestone surround, of c.1500. The remaining windows, 2 in each side wall, are single cusped lancets with 2-centred oolite surrounds, from the 1890s. The north wall windows were de novo and exhibit infill, but the south wall windows were possibly inserted into existing (medieval?) openings. The south door has a depressed 2-centred rear arch, possibly medieval; the similar surround is of oolite and from the 1890s. The west wall carries a simple, gabled single bellcote, with shoulders and a plain semicircular-headed opening, all (re)built in the 1890s; there is a bell. The nave roof has queen-post collar-rafter trusses arch braced from wall corbels, of softwood? and from the 1890s. The passages are of similar limestone flags to those in the chancel but relaid in the 1890s with suspended board flooring above the flags, from 1899?.

A medium-deep, secondary earth-cut cutting runs around the north, east and west walls, from 1915 and concrete-lined, exposing footings in areas; wide, revetted cutting for path along south wall is primary, secondarily widened. A pronounced earthwork scarp runs parallel with the north wall, platform?, earlier (prehistoric?) earthwork?. There is no evidence for floor level changes. The floors are not properly suspended and there is no underfloor void. No internal crypt/vault is evident. There is no evidence for former components beyond the present walls. A large post-medieval burial earthwork lies beyond the east wall.

The church has a simple 2 celled plan retaining most of the medieval fabric and arrangements. The nave and chancel may be contemporary and the form of the chancel arch suggests a 13th or 14th century date. The south door appears to have always been the only entrance into the church.

There is questionable evidence that the chancel side walls were rebuilt prior to the 18th century (see above) but, apart from the laying of the present flagged floors in the 18th or early 19th century (and the contemporary(?) large tiles in the chancel), little work appears to have been undertaken prior to the 1890s.

The church was restored in the 1890s (RCAHM, 1925, 131 et al.), possibly by Temple Moore, Architects (Pembs. R. O., HPR/26/18). The work was of low-medium impact. The nave north wall-head was rebuilt, and the church was refenestrated; the east window and the nave south windows possibly inserted in existing openings. The south door was rebuilt. The church was replastered, but the extent of removal of the existing plaster is unknown. The present roofs were put on.

By 1899 most of the restoration work was complete and included the present seating including the tiered seating in the nave west bay and the altar rail (ibid.). However, the tiered seating appears to have been (re)built in its present form in a further restoration of 1913-15 (plaque in church), with its wainscot dado and book rests, all in softwood and ‘Arts & Crafts’ in ethos.

This restoration, completed by 1915 (A. Gordon, 1993), may be the one referred to in undated specifications by H. J. P. Thomas, Architect, of Haverfordwest (Pembs. R. O., HPR/26/19). The proposed work was low impact and mainly superficial. The gables were recoped re-using the existing slate coping, the church was repointed, the concrete plinth was laid at the foot of the east and south walls, the roofs were partly reslated, and internal plaster was removed where defective, and replastered. The cutting along the west and north sides was excavated and concreted. It may have been now, or in 1923, that the chancel south window was inserted. The pulpit is dated 1918.

There was some renovation in 1923 (Pembs. R. O., HPR/26/19), by J. Coates Carter, Architect, of Prestbury, Glos., but most of the proposed work – the insertion of a new window opening in the west bay of the nave north wall, removing the existing window, and a proposed porch, rood, and nave ceiling – was not undertaken. The nave east gable was recoped and repointed, the roofing boards were fixed and the western dado fixed. The piscina appears stylistically to date from this period.

The oolite font has a square scalloped bowl, a cylindrical stem and a square base, late 12th or early 13th century.

At the dissolution, Haverfordwest Priory and its appurtenances fell to the king, including Lambston Church. A 21 year lease of the benefice, now a rectory, was granted to Henry Jones of the royal household in 1538 (ibid.), renewed in 1545. The patronage – along with that of Haroldston West – had been acquired by the Philipps family of Picton Castle by the 18th century (ibid.), who gave it to Pembroke College, Oxford, in 1749. By 1833 the living was again a perpetual curacy of the Archdeaconry of St Davids, endowed with £200 royal bounty (Lewis, 1833).

In 1998 St Ismael, Lambston, was a parish church. The living was a vicarage held with Haverfordwest St Martin (Benefice 577) in the Archdeaconry of St Davids, Rural Deanery of Roose (St Davids, 1997-8).