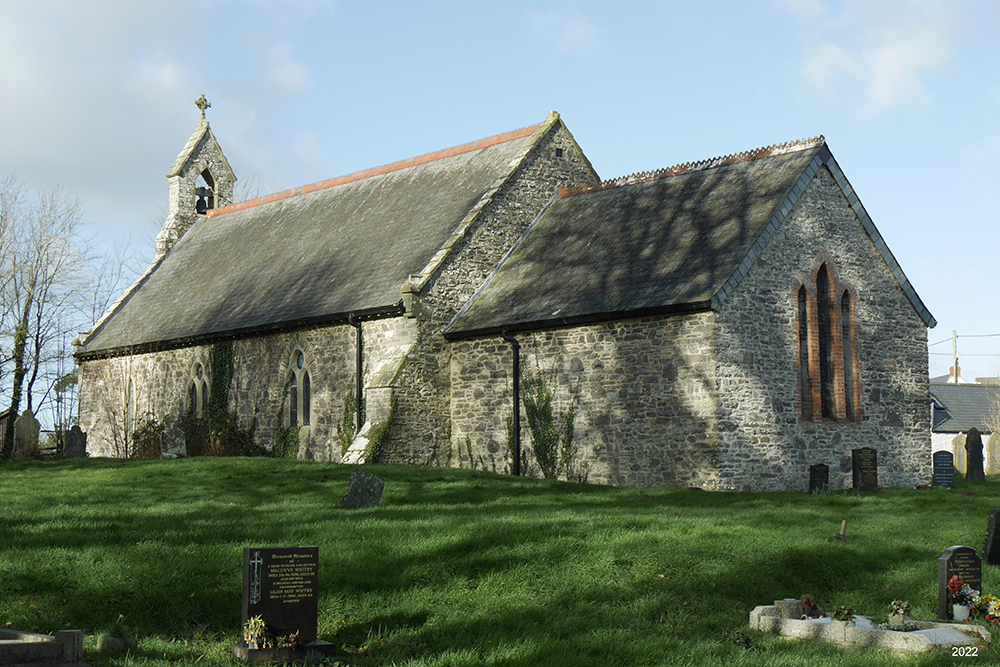 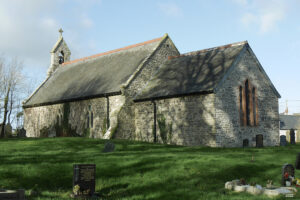 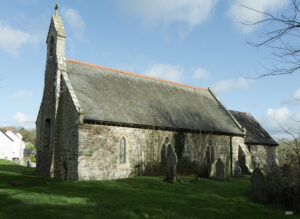 The present church consists of a 2-bayed chancel, a 3-bayed nave, a single-bayed north transept with a skew-passage, and a north porch. Construction is in limestone rubble, with much rebuilding/refacing from 1856 and 1891. The chancel arch and squints, the north door, ?rood-loft corbels, and ?re-used window dressings are medieval. The transept arch, tomb recess, ?altar recess, corbels, skew-passage arch, vault and blocked window, and the porch door and western bellcote buttress?, are from c.1600. Other openings are mainly from 1856, in neo-Gothic (early English) style, with yellow oolite dressings; the western single bellcote is also from 1856. There are remains of 18th – early 19th century external render; pointing is mainly from 1891, slightly ribboned, with some poor 20th century cement repointing. The interior is plastered except in the transept and skew-passage. Roofs are slated gables.

The east and south walls of the chancel, and the upper quarter of the east bay north wall, were largely refaced in 1891, with a triple-lancet east window in brick. The remainder of the east bay north wall is medieval, with extensive remains of 18th – early 19th century external render, and the eastern jamb of a possible blocked window is visible externally; the west bay is entered from the north transept skew-passage (see below), above which is an internal, weathered ?medieval corbel probably associated with a former roof. A narrow, full-height internal recess, with a medieval 2-centred head, at the west end of the south wall may be associated with the former rood-loft (but a mid-19th century description places the stair on the north side of the chancel – see Structural Development below). The low, plain, full-centred semicircular chancel arch may be from the later 12th century; either side is a plain square squint from the later medieval period, while above the apex, near the summit of the gable, is a small square recess, probably medieval and possibly associated with the rood itself. A flue rises through the interior of the wall to the south of the arch, to emerge in the gable-slope as a limestone ashlar stack with a ceramic pot, from 1891. The softwood roof has scissors-braced trusses from 1856, arch-braced from contemporary wall-corbels; the matchboarding was added in 1891. The passage and sanctuary are polychrome-tiled, from 1891 when the floor was raised, with contemporary woodblock flooring.

The upper three-quarters of the nave south wall were rebuilt in roughly squared and coursed rubble in 1856; the lowest quarter exhibits external render like that in the chancel. There are 3 windows in the south wall, all from 1856; the eastern two have 2 uncusped lights and a plain, circular-pierced spandrel, in 2-centred surrounds of chamfered yellow oolite. The westernmost is a single uncusped lancet in yellow oolite. At the east end of the south wall is an external stepped buttress from 1891. The north wall is original and unfenestrated but is pierced by a north door with a segmental surround possibly from the late 12th century. In the west bay, the external face of this wall exhibits, midway up, a weathered, ?medieval corbel – function? in situ?. The west wall is also original and features a large, central external buttress, double-shouldered; it carries a gabled single bellcote with a triangular-headed opening, rebuilt in 1856, but is pierced by a single, segmental-headed light without a surround, probably from c.1600. The softwood nave roof has queen-post trusses from 1856, arch-braced from wall-plates; the matchboarding was added in 1891. Floored as the chancel, with a below-ground heating chamber for a former ‘Porritt’s’ stove, from 1891; the flue led to either the chancel arch chimney (see above) or to that above the north transept arch (see below).

The long north transept is entered from the nave through a plain, full-centred semicircular arch, probably from c.1600; above it, the south face exhibits 4 medieval corbels associated with the former rood-loft. Emerging through the roof above the arch is a second chimney with a cylindrical stack in limestone ashlar from 1891. The upper two-thirds of the east wall, the western half of the north wall and the uppermost courses of the west wall were rebuilt/refaced like the nave south wall in 1856. The transept is lit by a window in the east and north walls. The east window has 2 uncusped, semicircular-headed lights in a square, ovolo-moulded surround in yellow oolite from 1856, replicating an original from c.1600. the north window may re-use some repositioned dressings from the 13th century; it has 2 uncusped lights and a plain-pierced spandrel in a 2-centred surround of double cavetto-moulded yellow oolite and a dripmould on stiff-leaf stops, (re)built in 1856. Internally, the north wall exhibits an empty tomb-recess with a plain, segmental head, and a small, square recess in the angle with the east wall, possibly associated with an altar; both features are also seen at St Ishmael’s, Pembs., where they are dateable to c.1600. There is also a small, square recess in the west wall. All features indicate that the transept was used as a chapel. The softwood roof has scissors-braced trusses and matchboarding from 1891. Floored as the chancel and nave. The transept was dedicated as a Lady Chapel in 1942 (Nicolle, 1983, 5).

A plain, segmental arch in the east wall of the transept southern bay, from c.1600 and with a deeply chamfered southern stop, leads into a skew-passage; either side of the arch are 2 contemporary internal corbels possibly associated with the transept altar-beam, or statuary. The passage features an unusual, unquoined right-angled return to the chancel north wall, again similar to that at St Ishmael’s, also dateable to c.1600; a slight external squinch at the junction with the chancel is of unknown function. The passage has a nearly flat, segmental barrel-vault from c.1600, sloping down to the south, over which is a slated lean-to roof to the chancel north wall. It emerges in the chancel as a ‘segmented’ semicircular arch, and was lit by a window in the outside wall, blocked with masonry, and internal breeze blocks from the later 20th century.

The north porch entry is through a plain, semicircular-headed arch that may be from c.1600; the gable above was rebuilt in 1856. The side walls have internal masonry benching with 20th century paved seating, and an original corbel possibly associated with the former roof.  The softwood roof has scissors-braced trusses and matchboarding from 1891. The tiled floor is either from 1856 or 1891 and laid directly on the substrate.

A possible earthwork platform is visible around the north, south and west sides of the church; it is very uneven to the north and may be enhanced by, or even comprise, building debris. A concreted external drain of variable depth surrounds the church, exposing footings around the south side; to the north-west, it lies within a cutting that is at least partly primary. The chancel floor has been raised. Floors are suspended in the nave and                transept. There is a below-ground heating chamber in the nave. External memorials lie significantly close to the east wall.

The nave facework is in large rubble; the small semicircular-headed chancel arch and the segmental north door may date it to the late 12th century. The chancel is in smaller rubble and it may be a late-medieval replacement an earlier short chancel, with contemporary squints. The long north transept and skew-passage, with a plan and detail similar to the south transept and passage at St Ishmaels, Pembs., are from c.1600. The porch door is also semicircular-headed but may be late rather than early, possibly dating the porch also to c.1600; the bellcote buttress may too be contemporary.

The church was in a ‘ruinous state’ in 1640 (Nicolle, 1983, 5), and in 1674 the patron, Sir John Stepney of Prendergast, was ordered to repair the chancel; 7 years later it was recorded that the church roof was good and no faults were reported in the general condition (ibid.).

The church was in ‘good order’ in 1807 (ibid.). In 1833 it was described as ‘not distinguished by any architectural details of importance’ (Lewis, 1833). An engraving from c.1855, reproduced in Nicolle, 1983, purports to represent the west end of Rosemarket Church but shows a west door with a full-centred semicircular head of plain, and decidedly Romanesque character, and a massive, single bellcote pierced by a similar opening, but not on a buttress. Further doubt may be cast on the subject being Rosemarket Church in that the building is shown in a state of semi-ruin, and almost completely overgrown, a condition which is suggested by none of the other sources.

An account of 1856 (Glynne, 1885, 215-6) describes the church, in general form, as at present. The chancel arch was ‘low, rude and obtuse’, and the transept arch was similar. The chancel side walls exhibited internal stone benching which continued either side of the chancel arch. The rood-loft steps survived on the north side of the chancel arch. The north door was ‘ill-shaped’ and ‘obtuse’, while the north porch doorway had a ‘deformed’ arch. The bellcote was described as a double bellcote and the present buttress is suggested. The windows were ‘mostly wretched’, but the north transept was lit by a 2-light window in its north wall, with a square head ‘of Perpendicular character’, which has survived. The skew passage, north transept internal corbelling and porch benching were noted. The west end of the nave was not floored, ‘only the bare earth’, and the west window was ivied.

The church was restored later in 1856 (Nicolle, 1983, 7). The yard build-up around the church was removed and a drain was excavated. The nave south wall was almost completely rebuilt, and the transept walls were partly rebuilt/refaced, while the church was refenestrated. The nave roof was restored. The bellcote was rebuilt in its present form and the ‘miserable and decayed’ seats for 135 worshippers were replaced by new pews for 248. A plan accompanying the restoration (ibid.) shows the nave and north transept both seated, stalls in the chancel, a triple-decker pulpit and a free-standing stove in the nave. It was intended to block the skew passage off from the chancel, but this was not undertaken.

A second restoration was undertaken in 1891 (Green, 1913, 267; Nicolle, 1983, 5). The chancel was partly rebuilt/refaced, with a new east window in  brick. The north transept and porch were reroofed, and the nave and chancel roofs were matchboarded. The church was refloored, the chancel floor being raised (Anon., 1898, 182) and a heating-chamber being inserted in the nave, with flue(s) to chimney(s). A buttress was built against the nave south wall at the junction with the chancel arch. The remains of the rood-stair, and the chancel benching were removed (RCAHM, 1925, 313). The church was again reseated. The chancel arch, north door and porch door were intended to be rebuilt (Nicolle, 1983, 5) but this was not carried out.

There is a bell in the bellcote.

A late medieval tombstone was discovered within the church during the 1856 restoration (Nicolle, 1983, 5); the present whereabouts are unknown.

At the dissolution Slebech Commandery, and all its appurtenances including the patronage of Rosemarket, fell to King Henry VIII. It remained in royal hands, but in 1625 the rectory was held by Sir John Stepney of Prendergast (ibid.). In 1656 Rosemarket was united with Llangwm and Freystrop (ibid.), a union which persisted into the 20th century.

In 1998 St Ismael, Rosemarket, was a parish church. The living was a vicarage, held with Burton (Benefice 666) in the Archdeaconry of St Davids, Rural Deanery of Roose (St Davids, 1997-8).

An original dedication to St Ismael may have been changed to St Leonard in the early post-conquest period (Nicolle, 1983, 3); it later reverted to St Ismael.