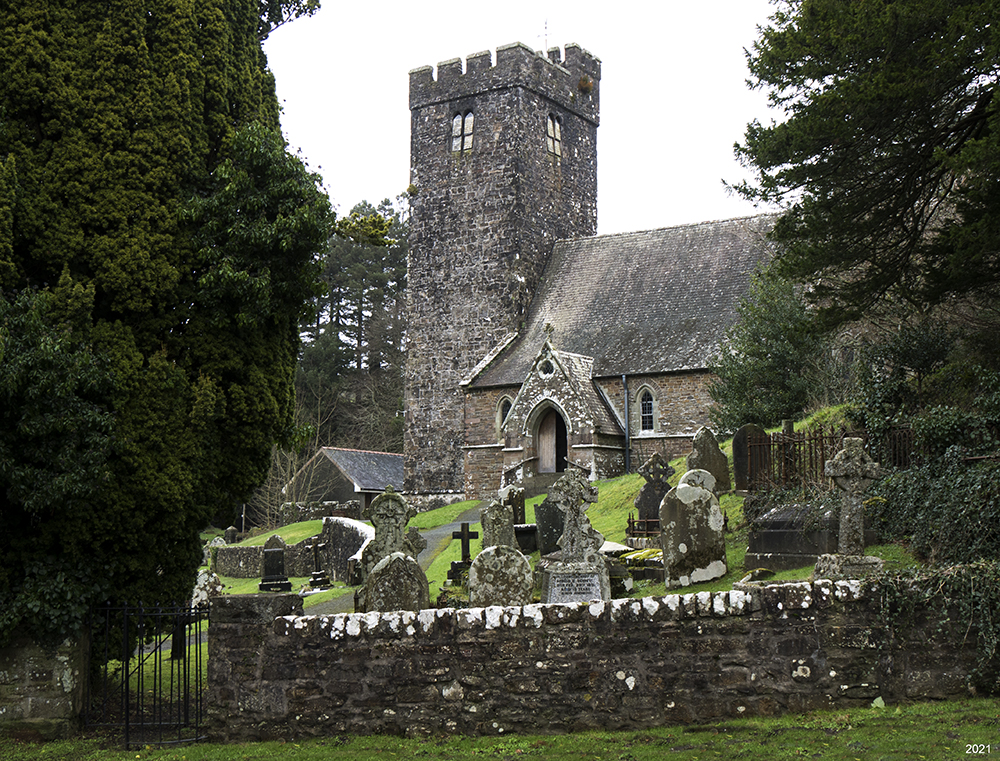 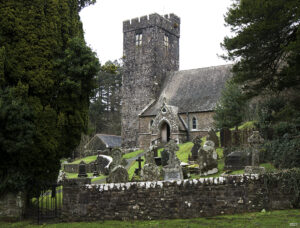 The present church consists of a single-bayed chancel, a 4-bayed nave, a 5-bayed north aisle, a 4-bayed south aisle, a south porch, a single-bayed transeptal vestry north of the north aisle east bay, and a 3-storeyed west tower. Construction is in largely in shale rubble, from 1864; surviving medieval work is in limestone rubble. Pointing is mainly from 1864 but there are the remains of earlier render in the tower, which also has some 20th century repointing; the interior is plastered except in the porch. The chancel arch, the north aisle arcade and the west tower, with its openings, are medieval; The remainder of the openings are mainly from 1824 and neo-gothic, with oolite dressings. Roofs are slated gables; the south aisle has a slated lean-to roof and the tower roof was not seen.

The chancel was almost entirely rebuilt in 1864 on the same site as its predecessor. The external walls are all from 1864 with single, double and triple lancet windows, both cusped and uncusped. There is an external decorative string-course. The tall, 2-centred chancel arch is in ashlar, with roll-moulded stops, chamfered imposts, from the later 14th century; the chamfered bases were rebuilt in 1864. The softwood chancel roof is scissors-braced throughout, the trusses also being arch-braced from wall corbels, matchboarded above, all from 1864. The ‘marble’ flagged floor is mid 20th century.

The nave is open to both the north and south aisles. The softwood roof is without trusses, the rafters all having collars and scissors-braced throughout, matchboarded above, all from 1864. The oolite flagged floor may be later 19th century, with suspended board floors.

The north aisle, like the chancel, was almost entirely rebuilt in 1864 on the same site as its predecessor. The east bay communicates with the chancel through a very depressed 2-centred arch, in ashlar, on chamfered stops with chamfered imposts; the detail, however, is sufficiently similar to that of the chancel to assign the same general later 14th century date. It communicates with the nave through and arcade of 4 similar arches, but with 2-centred heads; they are also later 14th century with chamfered bases partly rebuilt in 1864. The external walls are all from 1864 and have an external string-course like the chancel. They are pierced by uncusped single and double lancet windows, but the east window is in a 2-centred surround with plate tracery. Roofed as the nave, from 1864, and floored as the nave, later 19th century?.

The west tower is from the early 16th century and exhibits the basal batter and external string-course typical of the region. A square spiral stair turret projects from the eastern half of the north wall, entered through a simple, square-headed doorway, 16th century, and is lit by simple loops. The west door has a chamfered, 2-centred surround with a square drip-mould, 16th century but restored in 1864; the 3-light mullioned window above has a similar drip-mould but appears to have been entirely rebuilt. The chamfered, 2-centred arch into the nave is in ashlar. The timber ceiling is suspended on wall corbelling, 19th century?; a line of earlier corbels lies below which themselves are secondary, interrupting the arch head. The quarry-tiled floor is from 1864 and lies at a much lower level than the nave from which it is reached by a flight of 9 steps, also from 1864. The second stage is lit by simple square-headed lights in the north wall, 16th century. All 4 faces of the belfry stage are pierced by 2-light openings with semicircular heads in Old Red Sandstone surrounds, 16th century; the crenellated parapet lies on an external moulded offset, 16th century.

The south aisle was added in 1864, with a contemporary 4-bayed arcade into the nave copying the north aisle arcade. The south wall is pierced by single lancets and the east and west end walls by 2-light windows like the north aisle; there is a string-course like that in the chancel and a contemporary south door with a chamfered surround. The softwood, lean-to roof is braced by soulaces from wall corbels and is matchboarded, from 1864. Floored as the nave.

The south porch is also from 1864 and is battered beneath the external string-course. The side walls have internal masonry benching. The softwood roof is from 1864, lacks trusses, all common rafters having collars, and is matchboarded above, Floored as the chancel. The 2-centred door has a moulded surround from 1864 and is reached by a flight of 5 semicircular external steps (re)built in 1978.

The transeptal vestry was added in 1910. It is entered from the north aisle east bay through a contemporary tall, chamfered segmental arch on plain square bases. There is a single lancet in the east wall, from 1910, and the 2-light window in the north wall is re-used from the 1864 north aisle. The vestry is entered from the yard through a doorway with a Caernarfon surround, from 1910. The softwood roof, and the floor, are also from 1910. The vestry is now occupied by a pipe-organ.

There is a deep, but narrow external cutting around the north-eastern quarter of the church, and a shallow drain around the remainder. Evidence for former components possibly survives beneath the south aisle. Floors lie at a number of levels but there is no evidence for floor level changes. The floors are suspended above a void. External memorials lie significantly close to the north wall.

St Issell, St Issell’s, was largely rebuilt in 1864. However, the chancel arch and north aisle arcade belong, stylistically, to the later 14th century, and the west tower is early 16th century. From the sources (chiefly NLW, PG4244, Picton Castle Deposit 1985, no. 143, 1859) it would appear that the pre-1864 church comprised the present chancel and nave, possibly rebuilt in the later 14th century when the north aisle was added, a south transept and south porch in the area now occupied by the south aisle, and the present west tower. In addition, a further component is shown against the west end of the nave south wall – a bier house?, or limehouse?.

The church was restored in 1864 to the designs of the architect F. R. Kempson, of London (Saundersfoot Community Council, 1996), when the south transept, south porch and southern component were demolished. In addition, the outer walls of the chancel, nave and north aisle were demolished and rebuilt, a south aisle was added and a new south porch was built. The roofs and finishes date from this restoration; the floors may be rather later.

The limestone font has a square scalloped bowl with moulded, foliated decoration, and a square stem and a scalloped base, all late 12th century.

St Issell, St Issell’s, was a parish church during the post-conquest period (Rees, 1932), of the medieval Deanery of Pembroke. It was initially a possession of the Abbot of Seèz in Normandy (through Monkton Priory?), who later granted the church, along with Jeffreyston, S. Pembs., to the canons of St Davids Cathedral (Green, 1913, 297);  the two churches were consolidated in 1339. In 1291 the church was assessed at £13 6s 8d (ibid.).

In 1998 St Issell, St Issell’s, was a parish church. The living was a vicarage, held with Amroth (Benefice 669) in the Archdeaconry of St Davids, Rural Deanery of Narberth (St Davids, 1997-8). 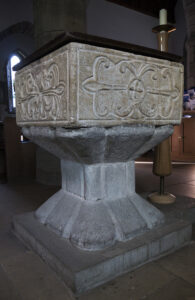 A beautifully carved bowl, it is among the finest Norman examples, decorated with scroll patterns of unusual character. 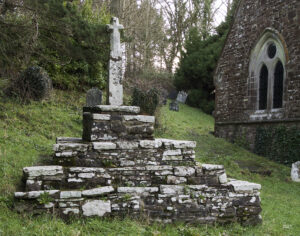 Located in the church grounds is also a Grade II listed building. 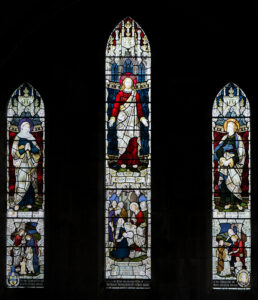 The window depicts the risen Christ in the centre with his mother Mary to his right and the disciple whom he loved, St John, to his left.

The window is dedicated to Lady Ann Lewis of St Issell’s and Aberdare, who passed away in 1902. She was the wife of Sir William Thomas Lewis, the first Baron of Merthyr of Senghenrydd. Sir William was the owner of the Hean Estate from 1899.

Lady Ann is clearly depicted by her portrait and her many good works are portrayed in the depiction “charity out of a poor heart”. 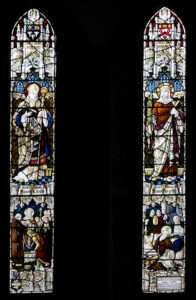 The window depicts two 5th Century Saints. The Martyrdom of St Tydfil who defied the pagans and refused to give up Christianity. The second is St Elvan, who came to our shores to preach Christianity.

The window is dedicated to the Honourable Trevor Gwyn Eliot Lewis, younger son of the 1st Baron of Merthyr of Senghenydd. Hew was 50 years old when he died in 1921. The coat of arms at the top of the window are those of Eton School and St John’s College, Cambridge which tell us something of his education. 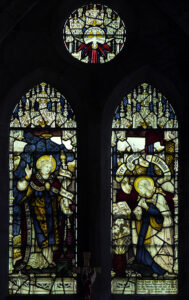 The window depicts the Annunciation of our Lady. Mary is visited by the angel who tells her of God’d plans for her. “Ava Maria gra pla” or “Hail Mary full of grace, the Lord is with you”. Mary’s commitment to her faith is demonstrated by her reading the scriptures when the angel arrives.

The window is dedicated to Charles Rankin Vickerman, his wife and sister in law in 1912. Vickerman was the owner of the Hean Estate until his death in 1897. 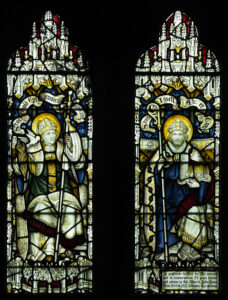 The window depicts St David to the left and St Issell on the right. St Issell is holding a model of the newly restored church in his hands, this more than likely reflects the improvements made to the building in 1910 when the vestry extension was added and pews were renewed throughout.

The window is dedicated to the reverend John Jones of St Issell’s 1888.

This the oldest window in the church.

The window depicts Jesus in the temple as a boy learning the scriptures. “Get wisdom, get understanding, forget it not”.

The window id dedicated to Charley Rigby Stephenson of Sr Issell’s Parish 1847 who died near Adelaide 15th May 1865. It was probably dedicated by his parents; given he was just 18 years old at his passing.