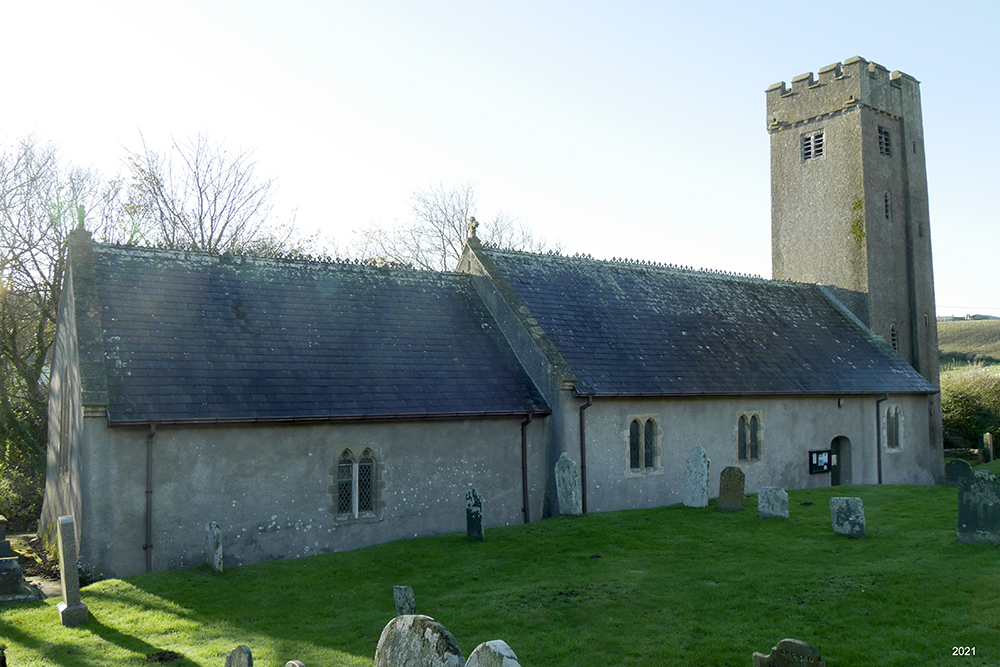 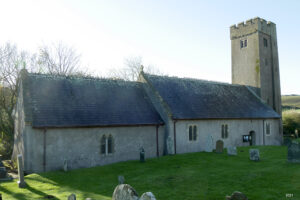 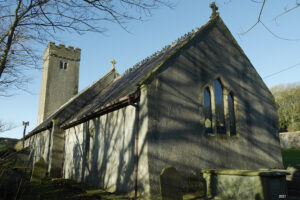 Archaeological potential – very good-excellent. Deep, revetted cutting around 50% of church, primary, footings exposed in 5% of church; very shallow concrete drain around 45% of church; floors not suspended, no an underfloor void; below-ground boilerhouse against 5%, but no internal crypt/vault evident; no evidence for former components beyond church; memorials significantly close to 40% of church.

The present church consists of a 2-bayed chancel, a wider 4-bayed nave, and a 3-storey west tower. It is entered from north. A lean-to boilerhouse lies against the nave south wall. The facework cannot be seen, all lying beneath thick external roughcast render from the mid-20th century. Internal render/plaster, 1890. Roofs are slated gables, the nave always roofed at a higher level; the boilerhouse roof is a lean-to with a synthetic covering; the west tower roof was not seen.

The chancel east and north walls have a pronounced external batter. The east window is a triple plain lancet with independent heads, in oolite, from the later 19th century (before 1890). The north and south walls of the west bay are pierced by uncusped 2-light windows in squared surrounds, of oolite and from 1890. The chancel arch is medieval, plain and 2-centred, with bold offsets in the stops suggesting the former presence of a rood-screen; a through-socket lies in the wall north of the arch, associated with the rood-loft stair?. The chancel roof has a softwood, ‘wagon-roof’ ceiling, inserted beneath existing timbers in 1890. The east bay floor is tiled, from 1890; the west bay passage is tiled in later 19th century tiling reused in 1890, with woodblock flooring laid on concrete.

The nave is similar and the north wall is similarly battered. The 2 east bays have 2 windows in each of the side walls, of 2 uncusped lancets in square surrounds with sunk spandrels, in oolite and from the later 19th century (before 1890). The west bay north and south walls each have a window like those in the chancel side walls, from 1890. The north doorway has a depressed semicircular arch, and cut-outs for double doors, but no surround, and is from the 14th or 15th centuries. A blocked door with a similar arch lies opposite in the south wall, blocked at the Reformation?. The roof is like that in the chancel and also from 1890. Floored as the chancel, from 1890 reusing later 19th century tiles.

The west tower is from c.1500; it is tapered and has the basal batter characteristic of the district, but lacks a string course. It is rendered externally as the rest of the church. A square spiral stair turret projects from the north-west corner entered through a narrow doorway of c.1500 from the ground floor; it is lit by slit-lights, some with oolite surrounds. The ground floor has a barrel-vault of c.1500 with a 2-centred profile, with a large central bell-rope opening. It opens to the nave through a 2-centred arch reflecting the profile of the vault, and is tiled as the nave passages, from 1890. The west wall is pierced by a lancet with an oolite surround, from c.1500. The second stage is lit by 2 single, cusped square lights in the north wall, c.1500. The belfry stage has 2-light openings with square heads in square oolite surrounds in the east and north walls, c.1500. The parapet lies on a plain corbel table that stops at the stair turret, also c.1500; the merlons have been restored without coping, 1890?, 20th century?, and with a rainwater chute. The tower is in good condition but the medieval dressings are weathered.

The yard build-up around the church was excavated away in 1890, and a deep, revetted cutting excavated around the north, west and south-west walls, but only exposes the footings of the tower south wall. A very shallow concrete drain on a raised ‘plinth’ lies along the south walls. The floors are not suspended and lack an underfloor void. The boilerhouse against the nave south wall is below-ground, but no internal crypt/vault is evident. There is no evidence for former components beyond the present walls. Memorials, from the early 19th century – 1913, are significantly close to the south and east walls.

The church and its plan are fundamentally medieval, and the present chancel and nave may be 13th or 14th century; the chancel arch appears 14th century in form. One source suggests that the nave and chancel south walls are entirely Victorian (Salter, 1984, 51) but the external finishes prevent real analysis of the fabric. The church was always entered from north, but there is a blocked south door. The west tower was added c.1500 and is a ‘typical’ Pembrokeshire tower.

According to Samuel Lewis, the church was ‘rebuilt’ in 1761 (Lewis, 1833), and was described as a ‘neat edifice, consisting of a nave and chancel, (with) an elegant font of marble’. The RCAHM Inventory describes the church as having seen ‘several restorations, in the course of which all features of antiquarian interest which it may have contained were removed’ (RCAHM, 1925, 87).

The church was restored in the later 19th century but no details are known. The restoration appears to have been of medium impact including reroofing, reflooring and refenestration. The nature of the restored church can be ascertained from the text of the 1890 Faculty submission (NLW, SD/F/141). It was much as at present, but had a west gallery. A number of features survived subsequent restoration, including the present east window, the windows in the eastern 2 bays of the nave, and the present roofs and tabling. The church was tiled as at present but the tiles were later relaid. Medieval features like the chancel arch, present north door, blocked south door and tower openings are mentioned. There was a dormer window on south side, removed in 1890. The church was plastered internally, and featured ‘Royal Arms’ mounted internally, from the 18th century?, now gone.

The church was restored in 1890 (NLW, SD/F/141), to the specifications of Kempson & Fowler, Architects, at an estimated cost of £467. The restoration was medium impact. The yard build-up around the church was excavated away, and drainage laid. The existing walls were ‘made good’. The west gallery and seating were removed. All internal plaster was entirely stripped, and the walls were replastered. New windows were inserted in the chancel side walls and in the nave west bay side walls, in entirely new openings?. The existing roofs and tabling were retained, but given the present internal softwood panelled ceilings. The passages were relaid reusing the existing tiles, and woodblock flooring inserted; the chancel east bay received a new tile floor. The church was reseated in softwood, and the pulpit fitted; an altar rail was omitted from the specs. but appears to have been fitted. The tower ground floor was curtained off as the present vestry. The font was moved to its present position. A new north porch was proposed but not constructed.

An American organ was fitted before 1895 (Pembs. R. O., HPR/118/7), when roof ventilators were installed; both have now gone. The belfry was repaired and the bell rehung at the same time.

A boilerhouse was constructed, after 1923 (Pembs. R. O., HPR/118/7), against the south wall of the nave opposite the entry. It has low brick walls and is entered through the west end wall via a flight of 3 steps down to the below-ground floor. The south side wall has a plain window. There is still a functioning boiler with an aluminium flue rising through the lean-to roof. An oil-tank lies on a breeze-block stand south of the tower.

The entire church, including the boilerhouse, was given an external finish of roughcast render in the mid 20th century.

The children’s’ pews in the nave west bay may be 20th century.

The marble font has a circular bowl and an octagonal stem and base, from 1808?, when a font and a stone altar table were brought from Italy (RCAHM, 1925, 87); the latter was removed after 1925 and substituted with a plain table.

At the dissolution, Haverfordwest Priory and its appurtenances fell to the king, including the patronage of Dale, but it was later acquired by the Philipps family of Picton Castle (ibid.). In 1786, as a discharged curacy, it had a certified value of £6 (ibid.). It was endowed with £800 royal bounty in 1833 (Lewis, 1833), and the patron, J. A. Lloyd Philipps, was the lay impropriator.

In 1998 St James, Dale, was a parish church. The living was a vicarage, held with St Brides and Marloes (Benefice 664) in the Archdeaconry of St Davids, Rural Deanery of Roose (St Davids, 1997-8).

The dedication is given as ‘St James the Great’ (cf. Walwyn’s Castle) in the Cadw listed building survey.