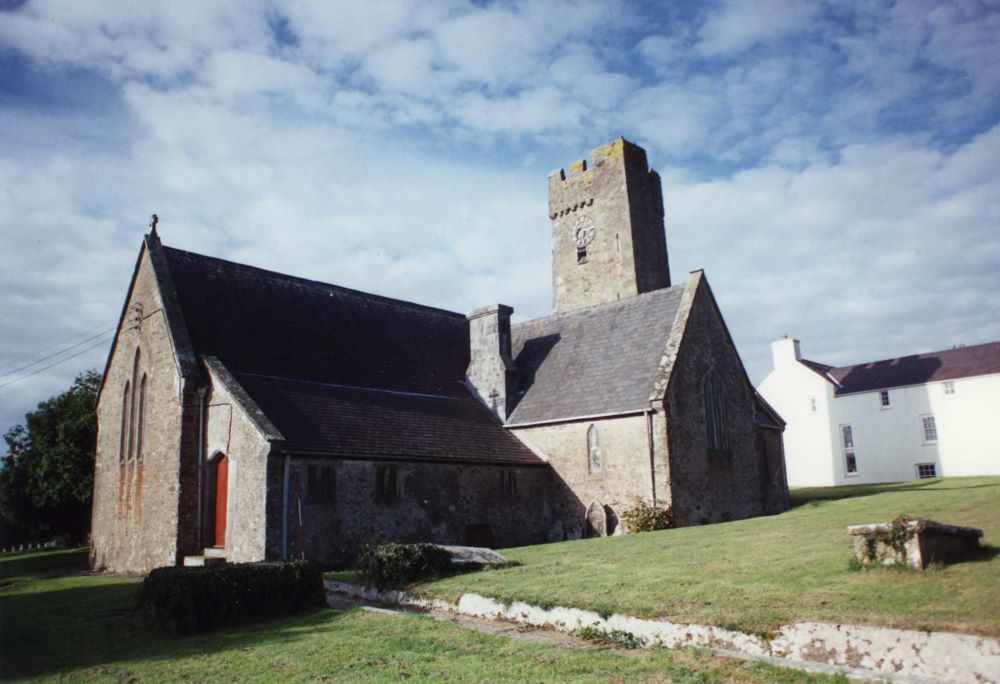 The present church consists of a 2-bayed chancel, a 3-bayed nave, a single-bayed south chapel, a 3-bayed north aisle incorporating a single-bayed north transept and former skew-passage, a single-bayed south transept, a south porch, a 3-storeyed west tower, and a single-bayed vestry north of the chancel east bay continuous with a single-bayed organ chamber north of the chancel west bay. Construction is in local limestone and Old Red Sandstone rubble. Arcades and openings, except in the tower, were entirely (re)built in 1867-8, in neo-Gothic (Early English) style, with limestone ashlar and dressings. Pointing is mainly from 1867-8, with some later (19th-20th century) external render and ribbon-pointing, and the interior is plastered. The south chapel, south transept, south porch and the tower ground floor are barrel-vaulted. Roofs are slated gables; the vestry/organ chamber has a slated lean-to roof and the tower roof was not seen.

There are a number of good 18th century memorials.

In the chancel east wall is a graduated, uncusped triple-lancet window in chamfered limestone, with the embrasure entirely from 1867-8, and there is a similar double-lancet in the east bay south wall. The depressed 2-centred chancel arch has 2 plain, unchamfered orders on chamfered imposts, all in limestone ashlar from 1867-8. The roof-line is continuous with that of the nave; the softwood roof, from 1867-8, lacks trusses, all rafters have collars and are arch-braced from wall-plates. The passage and sanctuary are tiled, from 1867-8, with suspended board floors; there is said to be an 18th century mortuary vault below.

The nave south wall leans out markedly. It is pierced by 2 windows; to the east is a double-lancet like that in the chancel, and to the west is a similar, single lancet, both from 1867-8. The south door was rebuilt, with a chamfered, 2-centred surround in limestone ashlar, in 1867-8; externally, to the east of the door is a stoup with a simple square recess, medieval. The south-west corner of the nave lies on an external masonry plinth, primary. The softwood roof has collar-rafter trusses arch-braced from wall plates, from 1867-8. The passages are quarry-tiled, from 1867-8, with heating ducts and a chamber for a ‘Porritt’s’ or ‘Grundy’s’ stove; there are suspended board floors.

The north transept was absorbed into the north aisle in 1867-8, but extends beyond the north wall of the latter; the aisle communicates with the nave through an arcade of three 2-centred arches, each with a 2-centred head of 2 plain, unchamfered orders; the outer orders lie on corbels while the inner orders are on cylindrical piers with plain bases, and plain tori supporting cushion capitals, all in chamfered limestone ashlar, from 1867-8. The east wall (ie. the transept side wall) communicates with the chancel via the former skew-passage described below; to  the north is a single lancet, like that in the nave from 1867-8. The flue from the heating stove emerges from this wall as a square, shouldered chimney with blind lancet decoration, late 19th century?. The north, gable wall of the transept is pierced by a graduated triple-lancet window, like the chancel east window and also from 1867-8. The aisle proper is lit by a further, similar window in the north wall, and a similar single lancet in the west wall but with a 2-centred outer arch, from 1867-8?, or earlier?. The softwood roof is from 1867-8 and is in 2 parts, a north-south gabled section in the transept and an east-west gabled section in the aisle; it lacks trusses, the softwood rafters all having collars. Floored as the nave.

The arch between the chancel and the south chapel is blocked by the large organ keyboard installed in 1908, which occupies most of the chapel, which is lit by a 2-light window in its south wall like that in the chancel, from 1867-8, associated with a ?contemporary outer arch. The external face exhibits a datestone commemorating the 1867-8 restoration. There is a 2-centred barrel-vault, medieval. The floor is obscured by the organ.

The south transept is entered from the nave through a depressed 2-centred arch in chamfered limestone ashlar, from 1867-8. It communicates with the south chapel via a low, chamfered segmental-headed arch with an almost square profile, medieval but restored, associated with a former skew-passage that was replaced by the chapel. The transept is lit by a 2-light window in its south wall like that in the chancel, from 1867-8, associated with a ?contemporary outer arch. There is a 2-centred barrel-vault, medieval. The floor is fully carpeted but appears to be suspended and floorboarded. The transept is now fitted as a chapel.

The south porch side walls feature medieval masonry benching. The entrance doorway has a double- chamfered 2-centred surround with simple imposts, of limestone with some sandstone, weathered, medieval but restored. There is a 2-centred barrel-vault, medieval. The flagged floor is from 1867-8 and laid directly on the substrate.

The west tower, comprising 3-storeys in roughly squared limestone and Old Red Sandstone rubble, is not entirely typical of the region but can be given a broadly 15th century date; it is tapered but lacks the external string-course typical of the region, has only a slight external batter, and does not feature a west door. The south wall of the ground floor is divided by an external vertical joint, to the east of which the wall has a basal plinth, like the nave west wall, and may represent the remains of an earlier structure eg. a west porch?. A square spiral stair turret projects from the east end of the north wall, which does exhibit the weathered remains of a basal string course; the turret is entered through a narrow triangular-headed doorway, medieval?, restored?, is lit by simple loops, and is offset back towards the north wall face at a higher level.  The 2-centred arch from the ground floor into the nave reflects the profile of the 2-centred barrel vault, 15th century. The west wall is pierced by a single lancet with a 2-centred outer arch, from 1867-8?, or earlier?; the embrasure appears to be contemporary, rebuilt?. The floor is carpeted, and to the west lies beneath a suspended board floor. The second stage is lit by a simple slit-light in the north wall; there are blocked, square-headed, simple single lights, with sandstone surrounds from the 15th century in the south and west walls. The belfry stage has a single-light opening with a 2-centred head in each face, from the 15th century. The tall, crenellated parapet lies on an external corbel table, which does not extend around the uncrenellated stair turret; there are rainwater chutes on the south and west faces of the parapet, originally 15th century?.

The vestry and organ chamber were added in 1867-8, and form a continuous lean-to against the chancel north wall divided by an internal wall. The vestry lies in the eastern chamber; it is entered from the chancel through a doorway with a 2-centred surround, in chamfered limestone ashlar, from 1867-8, and from the churchyard up 2 steps and through a similar door in the east, lean-to wall. It is lit by a 2 windows in the north wall, both from 1867-8 and comprising 2 lights with square heads in a square surround in chamfered limestone. The softwood rafters of the lean-to roof are from 1867-8. The floorboards are suspended over a void, but probably raised above the substrate. The organ chamber occupies the site of the medieval skew-passage into the north transept, with which it communicates via a low, segmental-headed arch with an almost square profile, medieval, with deeply chamfered stops following the line of the former passage. It communicates with the chancel through a similar low, segmental medieval arch. It is lit by a window in the north wall like those in the vestry, from 1867-8, and roofed as the vestry. The floor is fully carpeted but is probably tiled, from 1867-8. The present organ is later, and situated in the south chapel.

There is a slight external cutting along the north walls, secondary, and a shallow drain surrounds the rest of the church. The chancel and tower floors were apparently lowered in 1867-8 (Lloyd, 1992). Floors are suspended over heating ducts and there is a heating chamber in the nave. A mortuary vault apparently lies beneath the chancel.  No external memorials lie significantly close to the church.

The nave, and the chancel west bay, may be 13th-14th century, but cannot be closely dated. The vaulted transepts and skew passages are from the 14th century when the long chancel east bay may have been added. The south chapel, replacing the southern skew-passage, and the south porch may be contemporary; the porch is larger than the south transept and its doorway is stylistically later 15th century. The porch may have been added as a result of the construction of the ?contemporary west tower, which appears to have replaced an earlier ?west porch. The north aisle and vestry/organ chamber are 19th century.

The pre-restoration church was described in 1867 (Lloyd, 1992), when the north and south transepts were ‘low and insignificant’ and their arches ‘low and coarse’, the northern one ‘obtuse and mis-shapen’ and the southern ‘so flat as hardly to be an arch’. The chancel east window had been ‘vilely modernised’. A watercolour of c.1830 by Charles Norris, taken from the south-east (ibid.), shows ‘domestic’ sash-windows in the chancel east and south walls, and high in the south walls of the south chapel and south transept; there were low-pitched slate gable roofs throughout and the exterior was whitewashed. A west gallery was present. There were, apparently, no windows on the north side (Nicholas, 1993, 4). By 1867 the ‘roof had fallen in and the walls fallen out’ (Lloyd, op. cit.).

Restoration began in 1867, to the designs of the London architect Thomas Talbot Bury (ibid.; Green, 1911, 210) who had previously restored Burton Church, Pembs. The restoration, completed in 1868, was heavy. The north aisle was added, absorbing the north transept, and the vestry/organ chamber were built, the latter converted from the former skew-passage. All internal arches, apart from those to the former skew-passages and the tower, were rebuilt. The church was entirely refenestrated and the south door was rebuilt. The interior was reroofed, refloored, replastered and reseated.

The softwood stalls and pews, the pulpit and the glazed, softwood tower screen, are from 1867-8 (Lloyd, 1992). The elaborate moulded reredos, in oolite and marble, is late 19th century (ibid.). The large organ was installed in the south chapel in 1908 (ibid.). The tower clock is from 1911 (ibid.). The chapel fittings, and screen, in the south transept are from the 20th century.

The limestone font has a square scalloped bowl on a cylindrical stem and base, all 12th century.

An ECM, a wheel-cross incised stone (Dyfed PRN 3479) of possible 9th century date, lies loose in the porch; it had been used for the threshold until moved in the early 20th century (RCAHM, 1925, 127).

St Jeffrey, Jeffreyston, was a parish church during the post-conquest period (Rees, 1932), of the medieval Deanery of Pembroke. It may initially have been a possession of the Priory of St Nicholas, Monkton (Green, 1911, 208) and was assessed, as ‘Ecclesia de villa Galfri’, at £5 in 1291 (Green, op. Cit., 209). It was transferred, with St Issells, to the canons of St Davids Cathedral, at a date between 1331 and 1339 when the 2 churches were united (ibid.). The union was dissolved before 1534; the patronage remained with the Dean and Chapter of St Davids but the tithes were leased to succession of private individuals (ibid.).

In 1998 St Jeffrey, Jeffreyston, was a parish church. The living was a rectory, held with Loveston, Reynalton and East Williamston (Benefice 668) in the Archdeaconry of St Davids, Rural Deanery of Narberth (St Davids, 1997-8).

The full dedication is to SS Jeffrey and Oswald; it has been suggested that the ‘Oswald’ element may be derived from the name ‘Ismael’ (RCAHM, 1925, 126) or represent the Saxon St Oswald of Worcester (Lloyd, 1992).

It has been argued that Jeffreyston is the site of a pre-conquest settlement following a radial plan, with a central church on the same site as the present structure (Kissock, 1993, 11).