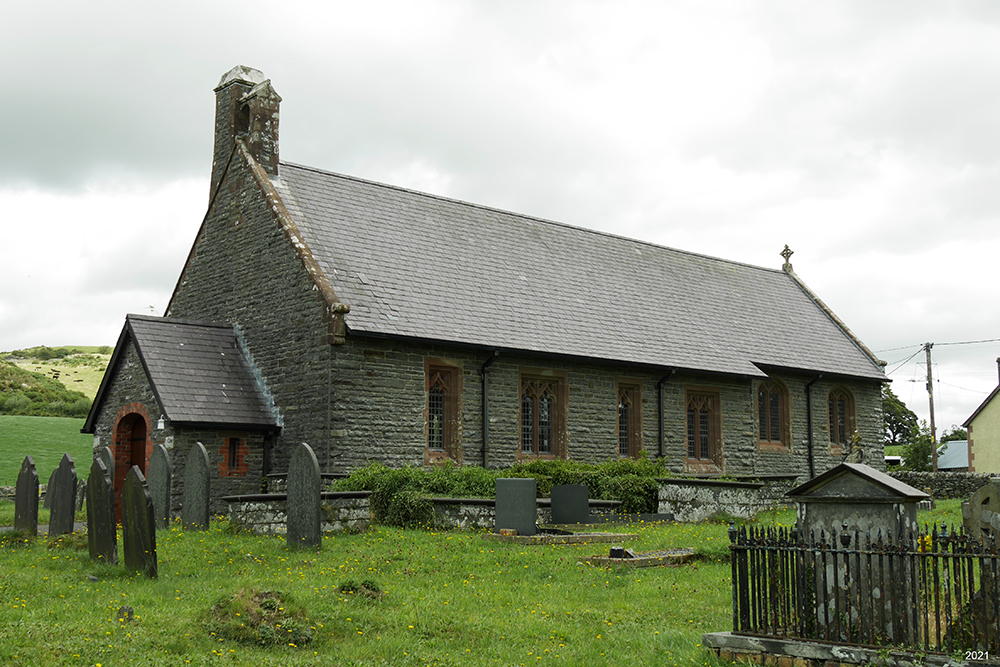 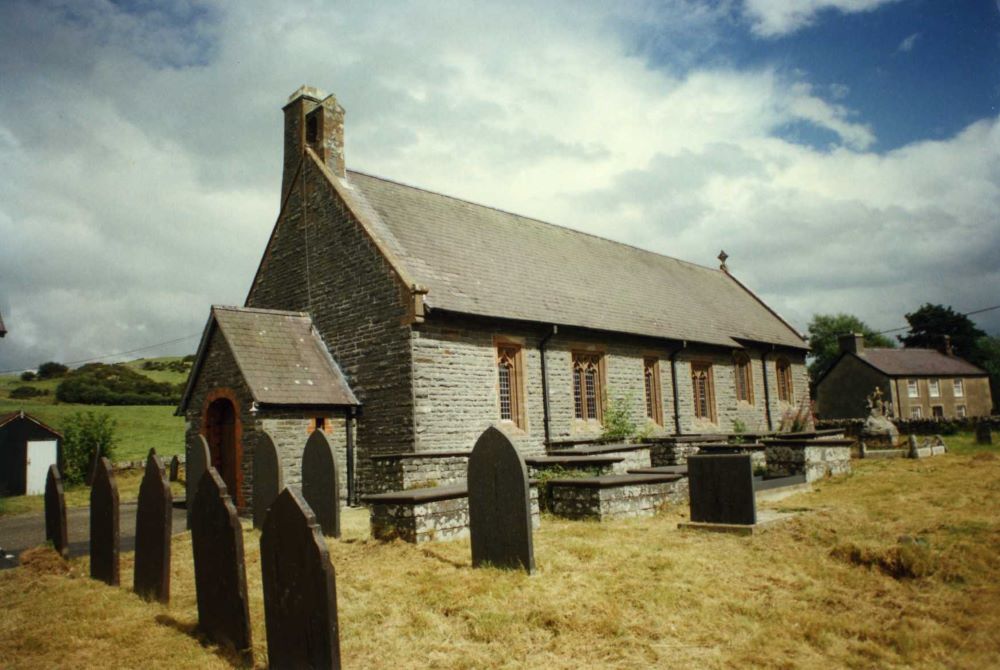 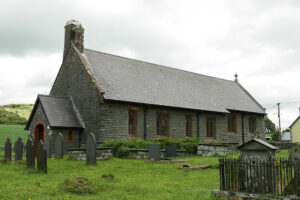 Reason for Listing: Included as an earlier C19 small church with some unusual fittings. The church building history shows an almost vernacular process by contrast with richer parishes.

St John the Baptist, Ystrad Meurig, is a 3-celled church, of small-medium size. It was entirely (re)built in 1898 on the same site, and on the foundations of its predecessor, but nothing was retained from the earlier fabric.

The present church consists of a 2-bayed chancel, a 4-bayed nave, a west porch and a single-bayed vestry north of the chancel west bay. Construction is in coursed local rubble throughout. All dressings are in red Forest of Dean sandstone (Clive Powell, 1993, 1) and from 1898; the openings are neo-Perpendicular, 4-centred or square-headed, the 1- and 2-light windows being cusped, with simple tracery. There is a combined chimney-stack and flat-topped single bellcote at the west end, 1898. The roofs are slated gables; the vestry has a slated hipped roof.

The earlier church was described by Lewis, 1833, as ‘a small plain building, consisting only of a nave’ and is shown as a plain rectangular structure on the tithe map of 1846 (NLW, Ysbyty Ystwyth, 1843). It had been used as a grammar school for some years prior to 1803 and was altered accordingly; the east window was blocked and replaced with a fireplace and chimney (Anon., 1878, 349). By 1878 the church was disused and ruinous, and was ‘used chiefly as a playground (for the neighbouring Grammar School) in wet weather’ (ibid.).

The church was demolished in 1898 and the present building was erected on its foundations to the designs of Arthur Baker, of Harold Hughes, Architects, of Bangor and London (NLW, SD/F/690). A west tower with a spire had been proposed but was never built. The church appears to have undergone no subsequent major alteration.

There is a shallow external cutting along the south wall, where churchyard levels have been raised by the dense concentration of burials, which lie significantly close to the walls. There is an underground heating chamber, and floors are suspended above heating ducts except in the porch.

St John the Baptist, Ystrad Meurig, was a parish church during the medieval period (Rees, 1932), of the medieval Deanery of Ultra-Aeron. It was granted, as the church of ‘Stratmeuric’ to the Knights Hospitaller of Slebech by Earl Roger de Clare, Lord of Cardigan, in c.1158 (Rees, 1897, 207) and had an annual value of £10.

Ystrad Meurig had lost its parochial status by 1833, when the church was a parochial chapelry of Ysbyty Ystwyth parish (Lewis, 1833). It had no separate endowment and was served by the incumbent of Ysbyty Ystwyth or his curate. The church had become disused and ruinous by 1878 (Anon., 1878, 349) but was restored to use in 1898 and later became a parish church once more.

In 1998 St John the Baptist, Ystrad Meurig, was a parish church. The living was a vicarage, held with Tregaron and Strata Florida (Benefice no. 695) in the Archdeaconry of Cardigan, Rural Deanery of Lampeter and Ultra-Aeron (St Davids, 1997-8).

The ‘St John the Baptist’ dedication probably dates to c.1158 and the acquisition of the church by the Hospitallers, for whom he was the patron saint (Various, 1994, 392). 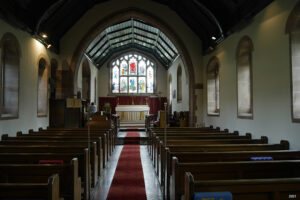 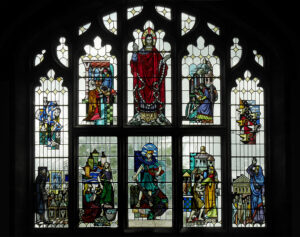 East wall of Chancel. “Christ with scenes from the New Testament”. 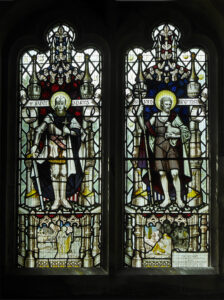 South wall of the chancel. “St Martin and St John the Baptist”.