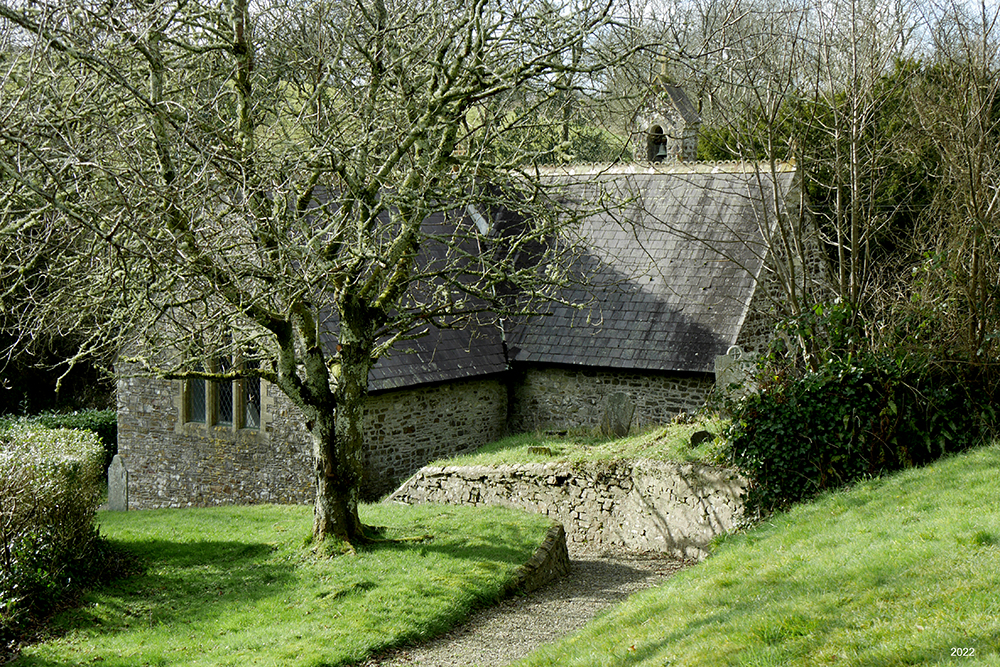 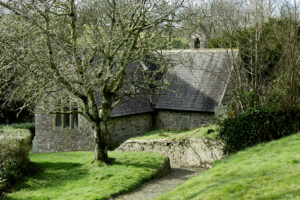 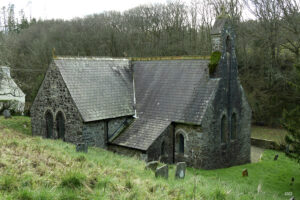 The present church consists of a 2-bayed chancel, a wider 3-bayed nave, a single bayed north transept (also communicating with the chancel west bay and probably to be regarded as a chapel), a south porch and a lean-to vestry north of the nave central bay, in the angle with the transept west wall. Construction is in medium-sized muddy limestone rubble throughout, unsquared but roughly coursed in areas, without quoins. There are restricted areas of pre-1874 external render, 18th century?; the majority of the external walling was ribbon-pointed in the later 20th century. All internal walls are rendered/plastered. Slated gable roofs, the chancel, north transept/chapel and porch roofs having always lain at a lower level than the nave roof; the vestry has a slated lean-to roof continuing the nave northern roof slope.

The southern half of the church lies upon made ground that forms a terrace upon the natural downhill slope to the south, and which is probably all primary. A corresponding cutting runs around the northern half of the church, and around the east and west walls, where the yard slopes steeply; the cutting is very deep, wide and lined with limestone flags. It is a primary feature, but was later deepened by up to 0.5, necessitating the insertion of prop walls beneath the chancel north wall, and the east and north walls of the north transept; this work is probably from 1874. The ground immediately south of the chancel may, at some period, have been lowered slightly – the footings of the chancel south wall may be exposed, and finished as an offset. There is no evidence for any changes in internal levels. The flooring is suspended throughout. No internal crypt or vault is evident. There is no evidence for any former components beyond the present church.

In its basic form of chancel, nave and north transept/chapel, the church has changed little since the medieval period. The chancel and nave may be the earlier components, but cannot be closely dated; they may be 13th or 14th century. The chancel arch was rebuilt in 1874, and the only medieval openings are the north and south doorways. Both have segmental rear arches but their surrounds have been rebuilt or, in the case of the north door, gone. The north transept/chapel may be an addition; its form – communicating with the chancel and forming a chapel – suggests a later medieval date, possibly 14th or 15th century. Its archway into the nave is plain and 2-centred; a low segmental arch connects it with the chancel west bay, with an east respond forming a curved ‘chamfer’ in the nature of a skew passage. Neither arch can be closely dated. A slit light high in the north transept/chapel north wall is also medieval but its square, oolite surround has been partly rebuilt, probably in 1874. All other structural work, openings and detail date from 1874, but the medieval church presumably featured a bellcote; at least one bell was present in 1691 (Evans, 1918, 359).

There is now no evidence for any real alteration prior to the 1874 restoration. The nave north door has the appearance of having been blocked at some period, presumably at the Reformation (see below). It is possible that the church was at least partly refenestrated in the 18th century with the ubiquitous single light, timber-framed/sash windows, and some external render from this period survives. The tithe map of 1837 (NLW, Freystrop, 1837) shows the church plan as today (but without the south porch and vestry). In 1833 the church was described as ‘not distinguished by any remarkable architectural feature’ (Lewis, 1833).

The church was restored in 1874 (RCAHM, 1925, 100), apparently to the specifications of the Diocesan Architect, E. H. Lingen Barker, of London, Hereford and Swansea (A. Gordon, 1993). The restoration was of high impact. The external cutting may have now been deepened and the prop walls inserted (see above). An unknown percentage of walling was rebuilt; certainly, the nave west gable wall was entirely rebuilt above eaves level, and possibly the chancel east gable too. The new west gable was given a gabled bellcote, shouldered, with a 2-centred, trefoil-headed oolite surround. The chancel arch was entirely rebuilt as a large, 2-centred arch with oolite mouldings. The nave south door surround was rebuilt in a similar fashion, whilst the north door was probably unblocked – it had lost its surround. The entire church was refenestrated in simple ‘Early English’ lancets, double- and triple-grouped in the end walls, with oolite and sandstone surrounds. The chancel was floored with polychrome tiles and the nave and transept passages were also tiled; suspended board floors were inserted beneath the new softwood seating in the latter two components. The church received entirely new softwood roofs, collared common rafters in the chancel, scissors-braced common rafters with crown-plates in the nave and transept, but no upstands were built, nor tabling beyond the provision of kneelers. The interior was replastered but the extent of removal of the old is unknown. Fittings from this restoration include the pews and stalls, the altar rail and pulpit. The font was probably moved to its present position by the south door (see below).

The south porch was built new in 1874, in similar rubble to the rest of the church, with coped buttresses and a 2-centred doorway; it has a softwood collar-rafter roof and the tiled floor appears to be laid directly on the substrate. The vestry was also an entirely new component, again similar in style, with a lean-to roof (plastered internally) and suspended floor.

Subsequent work on the church has mainly been confined to fittings. The reredos, with an elaborate oolite and tile frieze of Edwardian character, was installed 1900-10. The church has been entirely reseated in softwood during the 20th century, and the altar rail extended. The altar table is also 20th century. The external stonework was repointed in the later 20th century.

The font is a fine example of High Romanesque art, and unusual in the region. The square, scalloped bowl is supported on a cylindrical stem and 4 cylindrical free shafts; the base is square. It is almost certainly 12th century.

(Documentary evidence for the medieval church has the separate Dyfed PRN 3358).

At the dissolution Pill Priory with all its appurtenances fell to the crown, including the advowson of Freystrop, and in 1786 the patronage was in the hands of the king, as Prince of Wales (ibid.). The clear yearly value of the rectory was £20 (£40), and rated in the king’s books at £5 13s 4d (ibid.), and it was endowed with £400 royal bounty in 1833 (Lewis, 1833) as a discharged rectory of the Archdeaconry of St Davids.

In 1998 St Justinian, Freystrop, was a parish church. The living was a rectory, held with Llangwm and Johnston (no Benefice No.) in the Archdeaconry of St Davids, Rural Deanery of Roose (St Davids, 1997-8).