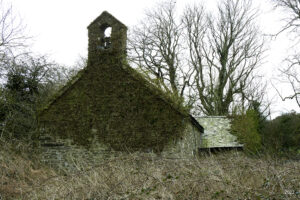 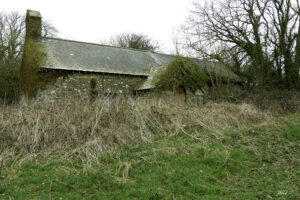 Archaeological potential – very good-excellent. Medium depth external drain around 100% of church, secondary, footings exposed; no evidence for floor level changes; floors are not suspended, no underfloor void; no internal crypt/vault is evident; no evidence for former components beyond church.

The present church consists of a 3-bayed chancel, a wider 3-bayed nave and a single bayed south transept with a large skew passage occupying its entire east wall. Construction is in medium-large limestone rubble, unsquared and uncoursed, unquoined; lime pointing of c.1800 with extensive repointing from the early-mid 20th century; internal render/plaster, later 19th century. The church is entered through a south door. Roofs are slated gables, the chancel and nave always having been roofed at the same level; the vaulted skew passage is lean-to roofed up to the chancel eaves.

A medieval mason’s mark can apparently be seen on the north-east corner of the chancel (Anon., n.d.). The chancel east wall has a medieval upstand and plain basal offset, possibly repaired over exposed medieval footings?. The east window occupies a square embrasure from c.1800 with a concrete lining, sill and semicircular-headed, timber-framed window from the early-mid 20th century. The south wall has the basal offset and the chancel central bay is lit by a window in both side walls, both with simple timber-lintelled embrasures and neo-Gothic timber-framed windows from c.1800. The plain, 2-centred chancel arch is fairly low and narrow and may be 13th century; the stops exhibit 2 plain imposts; above is a medieval upstand like that in the chancel. To the north, the wall is squinched to the chancel north wall, corresponding with the outline of a blocked rood-loft door on the west face and the nave south wall displays a rood-loft corbel.  The chancel roof has simple ‘A’-frame oak trusses, bolted, from the 19th century. The floor is quarry-tiled, those in the east bay from the later 19th century restoration; the remainder of the church was quarry-tiled in the early-mid 20th century.

The nave is lit by 2 windows in the north wall with square embrasures, with external segmental heads, again from c.1800; the plain sash-frames were replaced in the 19th-early 20th centuries. The south door has a similar segmental head rebuilt c.1800. The nave west wall also displays a medieval upstand and a plain gabled single bellcote with a crude, 2-centred opening, also medieval; there is a bell. The nave roof is softwood, with king- and queen-posts on the collar-rafter trusses, from the later 19th century restoration.

The south transept is entered from the nave east bay through a plain 2-centred arch reflecting the profile of the transept barrel-vault, all probably 14th century; there is a large projecting keystone at the apex. The south wall has a thick external render finish with hanging slates, from c.1800, and is pierced by a window like that in the chancel east wall but retaining its neo-Gothic sash from c.1800. The transept is floored as the nave.

The church has a simple 3 celled plan retaining most of the medieval fabric and arrangements. The nave and chancel may be contemporary and the form of the chancel arch suggests an early, possibly 13th century date. The vaulted south transept with its large skew passage is probably 14th century. The south door appears to have always been the only entrance into the church.

In 1678 the church was described as ‘newly built and finished’ (Anon., n.d.), but no features within the present fabric can be definitely attributed to this period.

Around 1800, the church was refenestrated with the present window openings which all appear to be de novo insertions. The south door was rebuilt and the church exterior was pointed, the south transept being given its external slated finish. The chancel roof may date from any period within the 19th century. Samuel Lewis, writing in 1833, described the church as ‘not distinguished by any interesting architectural details’ (Lewis, 1833).

The church underwent a second, low-impact restoration in the later 19th century, but no details, nor the architect responsible, are known. The interior was plastered, but no external repointing appears to have been undertaken. The nave was reroofed and the chancel east bay (the sanctuary) was quarry-tiled. An altar rail and desk were fitted and the nave seated with oak panelled pews, loose.

The church was restored for a third time in the early-mid 20th century, again low impact. All existing (flagged?) floors, except the chancel east bay, were taken up and the church was quarry-tiled; the exterior was repointed and most of the window-frames were replaced. The pulpit was fitted and the west bay given its present  seating, copying that from the later 19th century restoration.

The limestone font has a square bowl, a cylindrical stem and a square base all in one piece, of 13th-14th century date.

St Justinian, Llanstinan, was a parish church during the post-conquest period, of the medieval Deanery of Pebidiog (Rees, 1932). In 1302, the benefice was appropriated by Bishop David Martin to Martin Robert de Trefdyn, the precentor’s vicar, to be annexed to the subchantorship of St Davids Cathedral in perpetuity, but reserving the right to present a perpetual curate to the church with provision for the curate from the tithes (Green, 1912, 258). The cathedral sub-chantors were the rectors of Llanstinan (ibid.).

The church was assessed at £5 6s 8d for tenths to the king in 1291, the sum payable being 10s 8d (ibid.). There is no valuation for Llanstinan in the ‘Valor Ecclesiasticus’ of 1536, but is states that St Mary’s College at St David’s Cathedral received £4 13s 4d per annum from the church (ibid.).

In 1786 the discharged curacy of Llanstinan, of the Archdeaconry of St Davids, had a certified value of £4 (ibid.). It was endowed with £600 royal bounty and £200 parliamentary grant by 1833 (Lewis, 1833), and the patron, Sir John Owen, Bart., was the lessee of the tithes under the Cathedral subchantor.

In 1998 St Justinian, Llanstinan, was a parish church. The living was a vicarage, held with Llanwnda, Goodwick St Peter and Manorowen (Benefice 654) in the Archdeaconry of St Davids, Rural Deanery of Dewisland and Fishguard (St Davids, 1997-8).