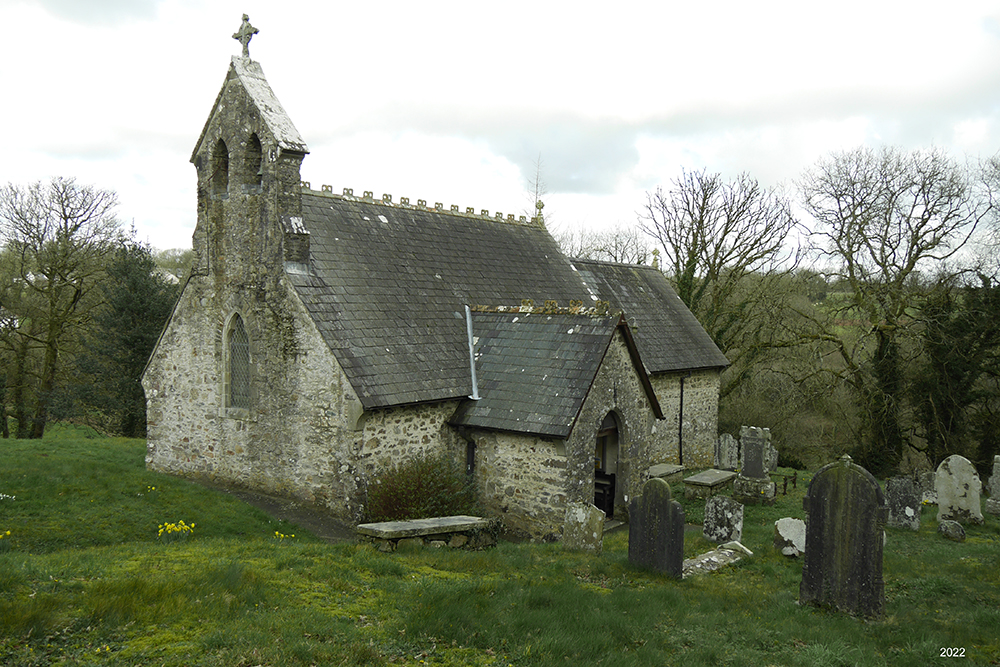 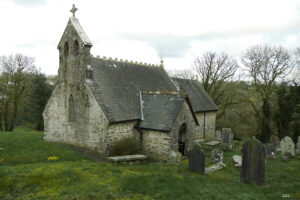 The present church consists of a 2-bayed chancel, a 3-bayed nave, a south porch and a vestry north of the chancel west bay. Construction is in medium-sized limestone rubble throughout, with some Old Red Sandstone and shale, unsquared and uncoursed, with medieval quoins in the nave. Good 1877 external pointing survives; some poor repointing of the later 20th century. All internal walls are rendered/plastered. Slated gable roofs, the chancel and porch roofs having always lain at a lower level than the nave roof; the vestry has a slated lean-to roof up to chancel eaves level.

A massive platform lies beneath the north-east quarter of the church, where the ground falls away steeply to the towards the north-east. The platform is probably at least partly natural, but its regular outline suggests that it has been artificially enhanced, presumably as a primary feature forming made ground for the chancel. The medium-depth earth-cut cuttings along the north and south walls are secondary, but possibly pre-19th century; the shallow drains around the remainder of the church, on the other hand, probably date from the 1877 restoration, or to 1889-1907 when the vestry was built. Memorials suggest a possible below-ground crypt/vault beneath the chancel east bay. The floors were raised by c.0.5m in 1877; the flooring is suspended throughout, and the passages overlie a heating duct from 1877.

In its basic form of chancel, nave and south porch the church has changed little since the medieval period. The nave may be the earliest component; it is quoined, unlike the remainder of the fabric, and may be 13th century. The unquoined chancel is possibly 14th century; the 2-centred chancel arch is plain but exhibits crude imposts. A plain corbel on its east face, north of the arch, may relate to the rood-loft, the former presence of which is demonstrated by the outline of a blocked door still visible beneath the internal plaster. Masonry benching on the chancel east wall is contemporary. The nave west wall carries a large square bellcote of rather crude construction; the shoulders, gable and two 2-centred openings are possibly also 14th century. The nave south wall continues beyond the west wall as a crude, square buttress, but there is nothing to suggest that the nave ever extended any further west than at present. The battered south porch lies beneath a 2-centred barrel vault; its 2 centred doorway is probably original and a possible 15th century date is suggested for the structure, a period when many of the region’s porches were added. The nave south door is similar, but partly rebuilt in 1877; immediately to the east the external wall features a shallow bowled stoup that is probably contemporary. A recess is shown in the nave north wall in a plan of 1877 (NLW, SD/F/613); it has now been blocked and its function is unknown, but may represent a medieval tomb recess. All other openings and detail date from 1877, and 1889-1907.

There is now no evidence for any real alteration prior to the 1877 restoration. A plan of 1877 (NLW, SD/F/613) depicts the church on the eve of restoration, with the ubiquitous single light, timber-framed (sash?) windows in the locations occupied by the present windows; no west window, however, is shown. steps down from the porch into the nave demonstrate that the floors have been raised. Box pews lay in the southern half of the nave, and a 2-decker pulpit was present. In 1833 the church was described as ‘not distinguished by any architectural details of importance’ (Lewis, 1833).

The church was restored in 1877 (Evans, 1917, 8), to the specifications of the architect E. H. Lingen Barker, of London, Hereford and Swansea. A Faculty application had been submitted in 1876 but was apparently rejected (NLW, SD/F/613); the accompanying plan, however, shows the restoration much as it was carried out (with the exception of a proposed flight of steps to the south porch). The restoration was of low-medium impact and was limited largely to refenestration and the provision of new roofs and floors. The windows are single lancets in the nave side and west walls, in oolite, and a 3-light window in the chancel east wall with oolite plate tracery; the embrasures were entirely rebuilt while the west wall embrasure was built new. The south door was partly rebuilt. Floors were raised by approximately 0.5m. The chancel was floored with polychrome tiles and the nave passages were flagged; the flags appear not to be re-used, and a heating duct runs beneath them. Suspended board floors were inserted beneath the new seating. The south porch was flagged directly on the substrate. The chancel and nave received entirely new softwood roofs, the former roof with collared common rafters, the nave with collar-rafter trusses arch-braced from new wall-corbels. New upstands and weather tabling were built, and the nave north wall recess blocked (see above) but there is no evidence for any real wall rebuilding. The interior was replastered but the extent of removal of the old is unknown. Most fittings are from this restoration, and include the pews and stalls, the altar rail, desk and pulpit. The font was moved from the north-west corner of the nave to its present position by the south door, and restored (see below).

The lean-to vestry was added north of the chancel west by between 1889 and 1907, it is first shown on the Ordnance Survey 1:2500 of 1907. In detail it resembles the 1877 work, and has a 2-light neo-gothic window. The door to the chancel, and the outside door both have oolite surrounds. The softwood roof is of common rafters, and the floor is tiled and suspended.

There has been little subsequent work on the church, although areas of the external stonework have poor repointing of the late 20th century. The altar table is also 20th century.

The square, limestone font bowl is probably from 1877; the cylindrical stem and square base are medieval (in contrast to the RCAHM account, 1925), but not closely dateable.

St Lawrence was a parish church in the post-conquest period (Rees, 1932), in the medieval Deanery of Pebidiog. It was granted, as ‘Ecclesia de Vado Patricii’, to the Knights Hospitallers of Slebech, by Philip le Poer in 1130 (Rees, 1897, 206). At the dissolution of Slebech Commandery, the advowson fell to the crown (Green, 1913, 300).

In 1998 St Lawrence was a parish church. The living was a rectory, held with Camrose, Ford and Hayscastle (Benefice 636) in the Archdeaconry of St Davids, Rural Deanery of Roose (St Davids, 1997-8).