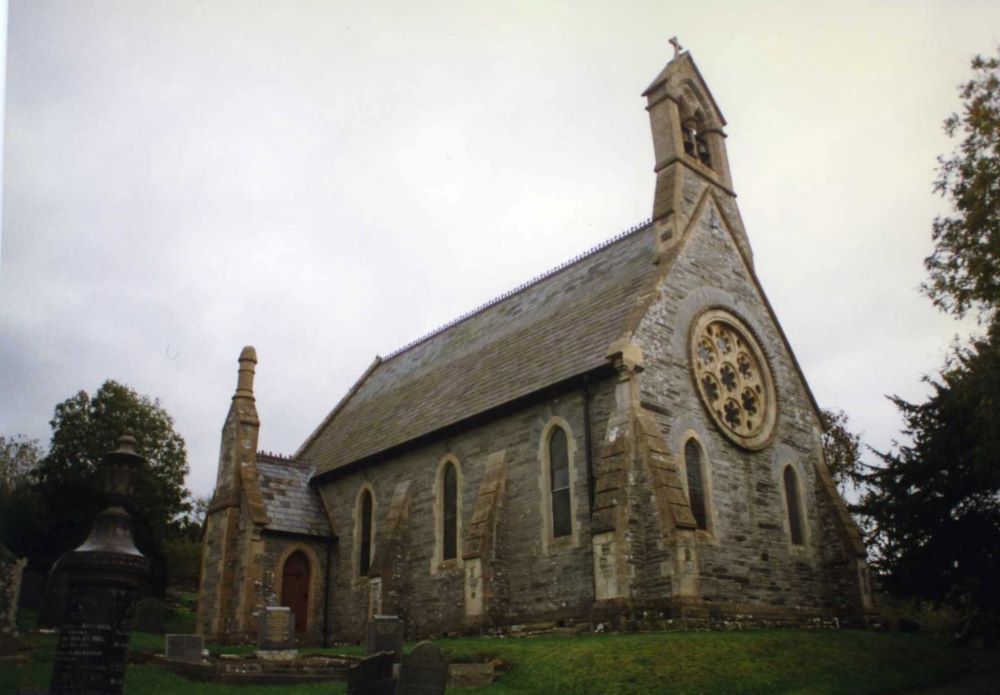 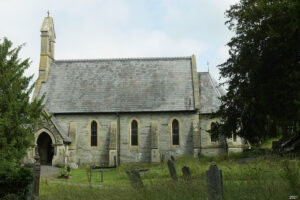 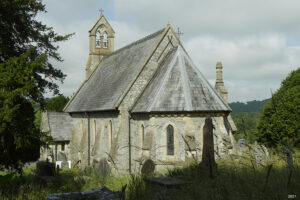 Reason for Listing: Not given.

19th century church; 0% medieval core fabric. On site of, but possibly not in the same location as, medieval church (PRN 2086).

St Llawddog, Cenarth, is a 3-celled church, of small size. It was (re)built in 1872 to the designs of the architects Middleton & Goodman of Cheltenham (Cadw, 1994, 5; Yates, 1974, 70), on the same site, but possibly not in the same location as its predecessor (PRN 2086), retaining nothing from the earlier fabric.

The present church consists of a single-bayed, polygonal apsidal chancel, a 4-bayed nave, a south porch, and a single-bayed transeptal vestry north of the nave east bay. Construction is in local slate rubble; the interior is plastered. All dressings are in yellow oolite and from 1872. The openings are neo-gothic comprising simple single lancets and a rose west window; the south door has complex mouldings. The exterior is buttressed throughout. There is a fireplace and chimney in the vestry. An elaborate gabled doubled bellcote, in yellow oolite, lies on the west end, the openings exhibiting plate-tracery, from 1872. The roofs are slated gables. The floors are suspended except in the porch.

If the tithe map is accurate (and it appears to be) then the pre-1872 church may have stood immediately to the south of the present building (NLW, Cenarth, 1840); however, there is no physical evidence in the yard, or disposition of burials, to support this. The earlier church was described as ‘a neat edifice’ in 1833, but ‘without any architectural details of importance’ (Lewis, 1833). It had one bell in the 16th century (Walcott, 1871, ii). A detailed account from 1855 describes a fundamentally medieval church (Glynne, 1898, 356). It was long, comprising a nave and chancel, both ceiled,  with a transeptal south chapel. The plain chancel arch was pointed and there was a ‘projection in the south wall’ (nature?). The windows were all ‘modern and very bad’; there was a pointed west door. There was a western double bellcote.

The 1872 church was built to the designs of the architects Middleton & Goodman of Cheltenham (Yates, 1974, 70) and appears to have undergone no substantial alteration.

The ECM now in the churchyard, a Latin inscribed stone, is also not in situ, having originally stood in nearby meadow, and was installed in its present location in 1894 (Anon., 1927, 30).

There is no physical evidence for the earlier church, unless the deep, wide earth-cut cutting around the east half of the church, and the platform beneath the west half formed by the resultant spoil, are primary (see above). The floors are suspended over heating ducts. Some external memorials lie significantly close to the church.

St Llawddog, Cenarth, was a parish church during the medieval period (Rees, 1932), of the medieval Deanery of Emlyn. It was appropriated to St Davids Cathedral.

In 1998 St Llawddog, Cenarth, was a parish church. The living was a vicarage, held with Llandygwydd, Cilrhedyn, Llangoedmor and Llechryd (Benefice no. 807) in the Archdeaconry of Cardigan, Rural Deanery of Emlyn (St Davids, 1997-8).

St Llawddog represents the dominant cult within Emlyn, cf. Cilgerran and Penboyr. Cenarth appears to have been the cult centre; Giraldus wrote c.1188 ‘Canarch Mawr, the ancient residence of St Ludoc (sic)… the church, dedicated to St Ludoc, mill, bridge, salmon leap, orchard and garden, all stand together on a small plot of land’ (Yates, 1973, 80).