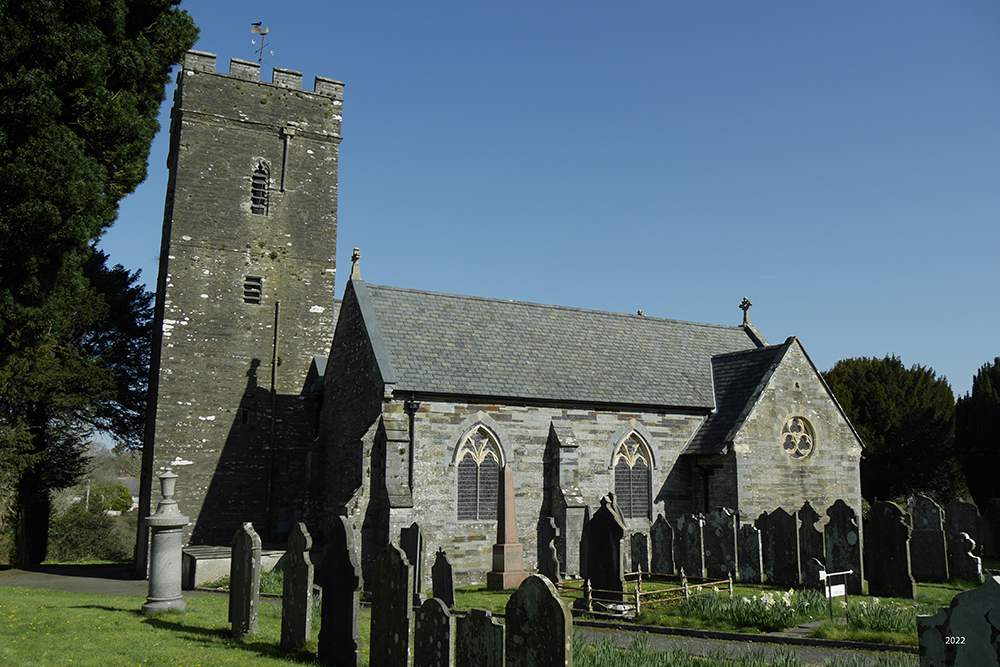 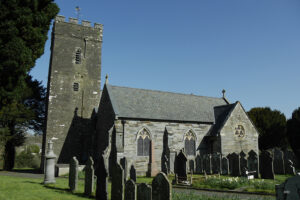 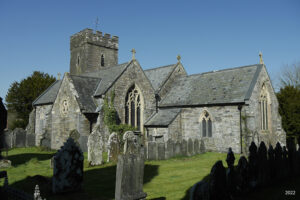 Reasons for listing. No reasons given.

Archaeological potential – good-very good. Church largely rebuilt 1839 and 1853-5; external cutting around 40% of church, with drain; no evidence for floor level changes; suspended floors and underfloor void; external heating chamber beyond 20% of church; no internal crypt/vault evident; no evidence for former components beyond church; memorials significantly close to 60% of church.

The present church consists of a 2-bayed chancel, a 3-bayed nave, a single bayed organ chamber south of the chancel west bay, a single bayed transeptal vestry north of the chancel west bay, a single bayed south transept, a 2-bayed south aisle and a 3-storey west tower which includes the church entrance. There is also an attached, below-ground heating chamber between the south aisle west wall and the tower south wall. Construction is in good quality, medium-large slate rubble, roughly squared and coursed; good mortar pointing, mainly from 1853-5; rendered/plastered within, also mainly 1853-5. Roofs are mainly slated gables, the nave always roofed at a higher level; the organ chamber roof is a slated lean-to, and the heating chamber has a flat roof. The west tower roof was not seen.

A deep external earth-cut cutting runs along the south walls, containing a drain. There is no evidence for floor level changes. Suspended floors are present, with an underfloor void. There is an external below-ground heating chamber between the aisle and tower, from 1930; no internal crypt/vault is evident. There is no evidence for any former components beyond those present. Some memorials lie significantly close to the west, east and south walls.

The west tower was constructed c.1500, and includes  the main west doorway into the church; it is stylistically characteristic of the region. The remainder of the church was entirely rebuilt, twice, in 1839 and in 1853-5.

Little can now be reconstructed of the form of the rest of the pre-19th century church, but it may be that the present structure has closely followed its plan. Richard Fenton visited Cilgerran c.1811 (Fenton, 1903, 276). He described the church as forming ‘a very interesting subject for the pencil; but there is nothing in the structure within or without worthy of particular observation’. Within the church, however, was a fragment of carved oak rood screen, a rare survivor of the Reformation in Pembrokeshire (but cf. St Brides). The fragment was ‘beautiful… of the same character, and most probably of the same age, as that most perfect specimen’ at Patricio, Brecs. (ibid.). The church was evidently substantial and of good quality, being described in 1833 as ‘an ancient structure, in the early style of English architecture, and in tolerably good repair’ (Lewis, 1833). The tithe map of 1838 shows a cruciform church which is probably only a stylistic representation (NLW, Cilgerran, 1838).

The 3-storeyed west tower is from c.1500. It is fairly typical of the region and is tapered throughout. The fabric is well squared and coursed slate rubble. A square spiral stair turret projects from the north-east corner and retains its slit-lights unaltered. The ground floor is vaulted with a 2-centred barrel-vault of c.1500 and is floored as the nave (see below). It is entered from the exterior through a 2-centred west door rebuilt, with a moulded oolite surround, in 1853-5. The remainder of the openings are from c.1500, and include single cusped lights in the second stage, and a single, 2-light louvered opening into the belfry, with a cinquefoil pierced spandrel; the oolite surrounds are original. The crenellated parapet lies on a corbel table typical of the region; the crenellations were renewed in 1853-5 (RCAHM, 1925, 69).

All detail in the remainder of the church is, like the core fabric, from 1853-5 and 1865 and neo-Decorated in style. The 3-light chancel east window is traceried, in a 2-centred oolite surround. There are similar 2-light windows with pierced spandrels in the remainder of the church. The exterior of the 1853-65 fabric exhibits stepped and coped buttresses throughout. The 2-centred chancel arch is of simply moulded oolite, without capitals; the organ chamber arch, and vestry door, have similar profiles. The softwood roof is from 1853-65 as is the tile floor.

The nave is divided from the south aisle by a 3-bayed arcade of 2-centred arches on octagonal piers, with moulded slate capitals. A simpler arch, like the chancel arch, leads from the aisle into the south transept. The west door into the tower has a 2-centred surround. The softwood roofs of the nave, aisle and transept are from 1853-5, as are the softwood seating, suspended floor and tiled passages.

There has been some further work. The reredos was erected in 1877 (NLW, SD/F/112) when the chancel was refloored, both undertaken by Benjamin Ferrey (Cadw, 1994, 3), The plain oak retable was installed in 1879 (NLW, SD/F/113). A large heating chamber lies externally, between the west wall of the south aisle and the tower south wall. It was built in 1930 (NLW, SD/F/116), mainly below ground, but with low slate rubble walls and a flat roof above ground level; it is reached by a (largely internal) flight of steps.

Reasons for listing. No reasons given.

With the Act of Union and the abolition of the Earldom of Pembroke, the advowson fell to King Henry VIII, and remained in royal patronage. In 1786, the discharged rectory of ‘Kilgarran alias Culgerran alias Cylgerddan’, of the Archdeaconry of Cardigan, had an annual value of £38 (£50), and was rated in the king’s books at £9 (ibid.). The situation was unchanged in 1833 (Lewis, 1833).

In 1998 St Llawddog, Cilgerran, was a parish church. The living was a vicarage held with Bridell and Llantwyd (Benefice 644) in the Archdeaconry of St Davids, Rural Deanery of Cemais and Sub-Aeron (St Davids, 1997-8).

The cult of St Llawddog appears to have been the dominant cult in Cantref Emlyn during the later medieval period, with 3 more dedications (Yates, 1973, 67).