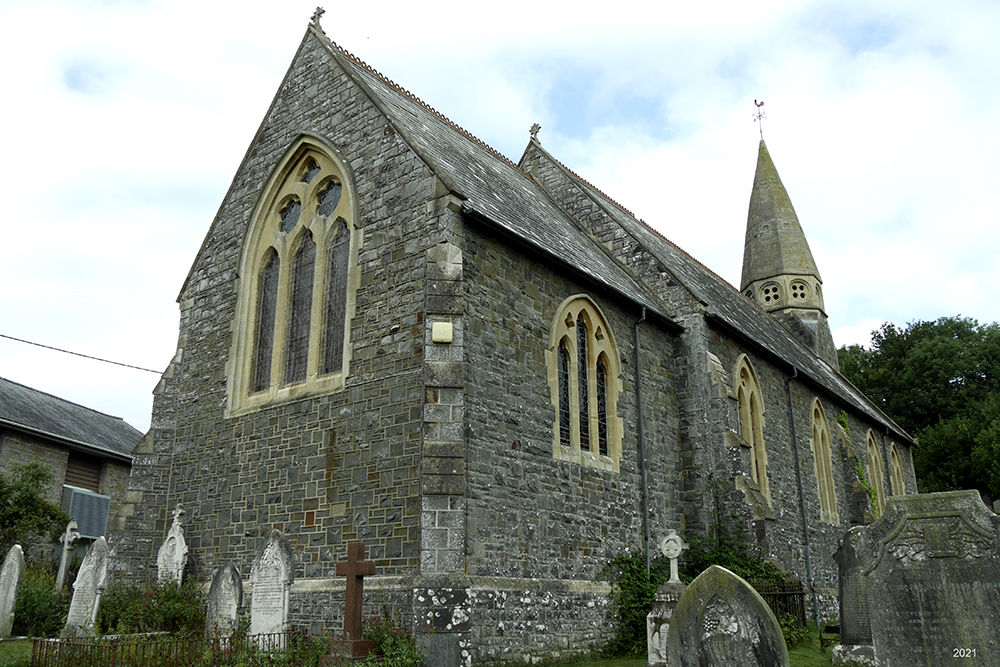 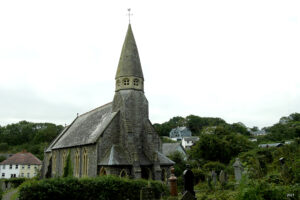 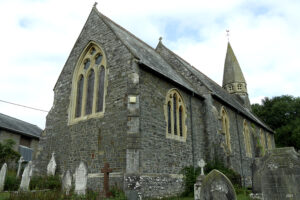 Reasons for Listing: No reasons recorded.

Archaeological potential – good. Shallow external earth cutting around 10% of church; below-ground floor in 15% of church; suspended floors over heating ducts in 85% of church; external memorials significantly close to 40% of church.

St Llwchaiarn, Llanllwchaearn, is a multicelled church, of medium size. It was entirely (re)built in 1863-5 on the same site, and in the same location as its predecessor, but nothing was retained from the earlier fabric.

The present church consists of a 2-bayed chancel, a 4-bayed nave, a west porch/bell-turret, a single-bayed  organ chamber/boilerhouse south of the nave east bay, and a single-bayed vestry south of the chancel west bay added in the earlier 20th century. Construction is in local rubble throughout, with 1863-5 pointing; plastered within. Openings are mainly from 1863-5 and neo-gothic; dressings are in yellow oolite. The exterior is buttressed throughout, 1863-5. The west porch forms a full-width lean-to against the nave west wall, from the centre of which emerges a bell-turret with an octagonal oolite spire, 1863-5. The organ chamber lies over a below-ground boilerhouse reached from an external stairwell along the nave south wall; it has a simple chimney. Roofs are slated gables; the west porch has a slated lean-to roof while the organ chamber/boilerhouse and vestry have flat roofs. The floors are suspended throughout.

The earlier church was described as ‘an ancient edifice’ (Lewis, 1833) which comprised a nave and chancel with a 2-centred chancel arch. It is shown in the present location, and with much the same dimensions as, the present church on the tithe map of 1847 (NLW, Llanllwchaearn, 1847). The medieval church was demolished in 1863 and entirely rebuilt by 1865 (Evans, 1930), to the designs of the architect R. J. Withers, of London (Cadw, 1996, 35). The present vestry was added by W. D. Caroe in 1935 (ibid.); there appear to have been no further major alterations.

The font is 19th century. The earlier font bowl now lies loose in the church (Anon., 1914(i), 21) and is square, with relief decoration and 4 human masks at the corners (cf. Llanfair Clydogau and Silian, Cer., Cenarth and Pencarreg, Carms., et al.).

A slight external earth cutting runs around the south-west corner; there is no further external cutting or drain. The boilerhouse floor is below-ground, with an external stairwell. Floors are suspended over heating ducts throughout. External memorials lie significantly close to the north wall.

Documentary sources for the medieval church have the separate PRN 10509.

St Llwchaiarn, Llanllwchaearn, is not shown as a medieval ecclesiastical site by Rees, 1932. However, there was certainly a church or chapel here in the post-conquest period and it appears to have been in the possession of the Bishops of St Davids from an early period. The church formerly possessed an Elizabethan chalice and is shown by Blaeu, 1648.

Llanllwchaearn had become a parish by 1833 when the living, a discharged rectory in the patronage of the Bishop, was rated in the king’s books at £6 7s 8½d (Lewis, 1833).

In 1998 St Llwchaiarn, Llanllwchaearn, was a parish church. The living was a rectory, held with Llanina (Benefice no. 679) in the Archdeaconry of Cardigan, Rural Deanery of Glyn Aeron (St Davids, 1997-8).