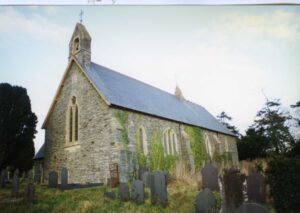 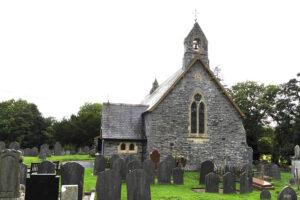 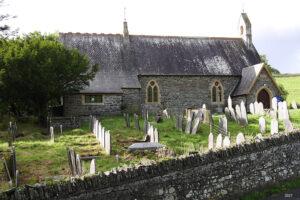 Archaeological potential – good. no external cutting or drain; floors suspended over heating flues in 90% of church; burial vaults beneath 20% of church; external memorials significantly close to 50% of church.

St Llwchaiarn, Llanychaearn, is a 3-celled church, of small size. It was entirely (re)built in 1878 on the same site, and in the same location as its predecessor, but nothing was retained from the earlier fabric.

The present church consists of a single-bayed chancel, a 3-bayed nave, a north porch and a single-bayed vestry north of the chancel with a small organ-chamber. Construction is in local rubble throughout; external pointing is mainly from 1878, and the interior is plastered. Openings are from 1878 and neogothic, with yellow oolite dressings, the windows comprising single lancets and 2- and 3-light windows with simple tracery. There is some external buttressing, and a string-course at the east end, all 1878. There is a gabled, single western bellcote is also from 1878, and there is a contemporary oolite finial over the chancel arch. The chancel and nave have a continuous slated gable roof; the vestry/organ chamber has a slated lean-to roof.

The earlier church was described in 1833 as ‘an ancient structure… being distinguished within by an air of neatness and comfort; the porch is a good specimen of Early English architecture’ (Lewis, 1833). The tithe map of 1845 shows a small rectangular building apparently comprising a single cell and west porch (NLW, Llanychaearn, 1845).

Some rebuilding or restoration may have occurred before the middle of the century for in a contrasting account Sir Stephen Glynne described it as ‘a small church, scarcely worthy of notice as the walls seem for the most part to have been rebuilt’ (Glynne, 1897, 306-7). The west porch was termed ‘rude’, and had ‘plain pointed doorways’. The windows had all been ‘modernised’, and the ‘pointed’ western bellcote contained ‘an open arch’. The font was set in a recess in the west wall.

By 1878 the church demonstrably had lost its medieval character. Drawings of that year (NLW, SD/F/450) show a 3-bayed, single-cell nave and chancel, without structural division, and a west porch. The tall, narrow, tapering single bellcote was pierced by a 2-centred opening and the west porch entry was also 2-centred; the east window was a semicircular headed single light of 18th – early 19th century date, and the south wall exhibited segmental and square windows of 19th century, domestic character. A western gallery was entered through a similar doorway in the west wall north of the porch, reached by a flight of external steps. In the angle between the porch south wall and the nave west wall had been built a narrow vestry, entered from the nave, lit by a domestic window.

The church was demolished and entirely rebuilt in 1878 to the designs of the architect A. Ritchie, of Chester (ibid.). The new church was built on the foundations of the old but is longer, extending further west. The vestry and north porch are contemporary but the latter was extended to the west as an organ chamber in c.1921 (NLW, SD/F/454).  The vestry and organ chamber were renovated in 1958 (not built in 1958 and claimed by Hook Mason, 1991, 2).

The small font has an octagonal bowl and stem, 13th – 14th century?.

There is a single bell.

There is a neither an external cutting nor a drain. Floors are suspended over heating flues in the chancel, nave and vestry. There are pre-1878 burial vaults below the chancel. External memorials lie significantly close to the north and east walls.

St Llwchaiarn, Llanychaearn, was not a parish church during the medieval period (Rees, 1932), but a chapelry of the rectory of Llanbadarn Fawr in the medieval Deanery of Ultra-Aeron, and lay in that parish (Lewis, 1833).

The parishioners of Llanbadarn Fawr still contributed to the repair if the church in the 19th century (ibid.) but Llanychaearn had become a parish by 1833; the living, a perpetual curacy in the patronage of J. P. B. Chichester, Esq., was endowed with £600 royal bounty (ibid.).

In 1998 St Llwchaiarn, Llanychaearn, was a parish church. The living was a vicarage, held with Llanddeiniol Aberarth (Benefice no. 689) in the Archdeaconry of Cardigan, Rural Deanery of  Llanbadarn Fawr (St Davids, 1997-8).