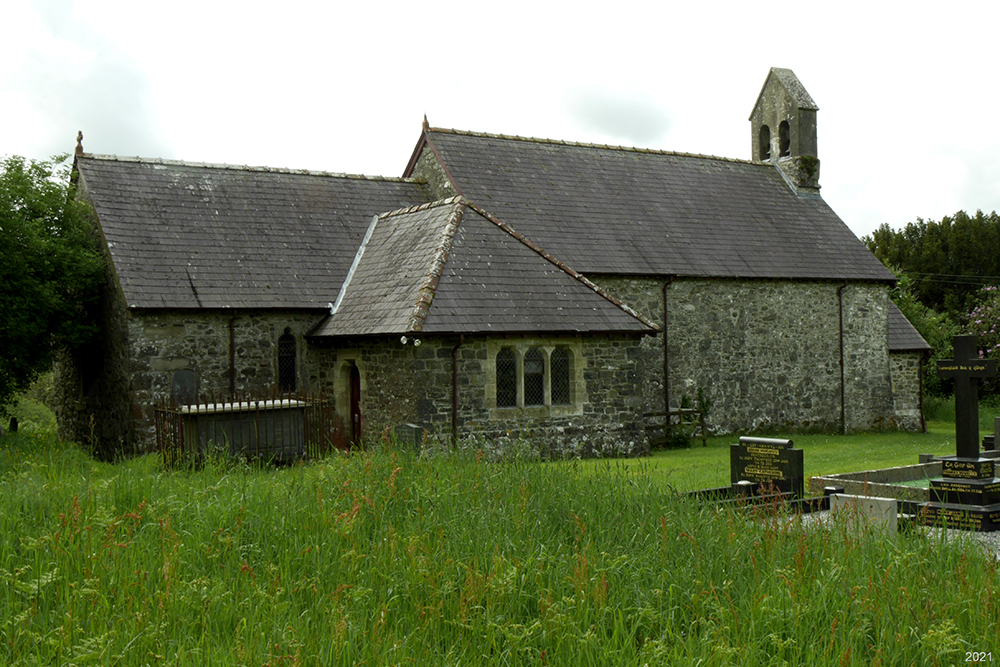 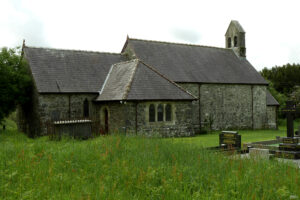 Reason for Listing: A church with surviving medieval fabric, including carved stonework to some windows, and jambs to W door, as well as rood loft corbels.

The present church consists of a 2-bayed chancel, a 2-bayed nave, a west porch and a transeptal single-bayed vestry, above a below-ground boilerhouse, north of the chancel. Construction is in limestone and mixed rubble; dressings are mainly yellow oolite and from 1898-9. The exterior was repointed in the later 20th century and the interior is plastered. Roofs are slated gables; the vestry has a slated hipped roof.

The chancel east wall leans outwards slightly. The cusped, 2 light east window is from 1898-9. There are single cusped lancets with limestone surrounds in the north and south walls, 14th – 15th century but partly rebuilt 1898-9. Beneath the south window is a piscina with a triangular head, late medieval, re-used and rebuilt 1898-9. The vestry door is from 1898-9. The plain, rounded 2-centred chancel arch is medieval, 13th century?. There is a plain square squint to the south, and 2 rood-loft corbels above the chancel arch, all medieval. The roof is concealed by a matchboarded, ‘wagon-roof’ ceiling, from 1898-9. The sanctuary floor and passage are tiled, with woodblock flooring on concrete, from 1898-9; no underfloor void. The internal plaster throughout the church has a roll-moulded dado from 1898-9.

The nave is lit by 2 windows in the south wall, both like the chancel east window and similarly from 1898-9, separated by a large, stepped external buttress also from 1898-9. A medieval window like those in the chancel lies in the north wall of the east bay but appears to have been re-used, its opening rebuilt in 1898-9 when the upper courses of the north wall were (re)built. The west wall has a slight external batter and a rebuilt medieval west door; the head is from 1898-9. Above it lies a double bellcote, with a concrete gable and 2 semicircular-headed openings, all built 1898-9 on the truncated remains of an earlier bellcote. The nave is roofed as the chancel, on wall-corbels from 1898-9. Floored as the chancel, also 1898-9.

The vestry is from 1898-9, including all openings, and lies over a below-ground boilerhouse, reached by a revetted flight of steps along the nave north wall. It has an external basal batter up to an oolite course. An external door in the east wall has a Caernarfon-headed surround; a 3-light window with similar heads in a square surround lies in the north wall, and a similar single-light window lies in the west wall. The boilerhouse door has a segmental brick head. The softwood hipped roof is without trusses, all common-rafters having collars, and is matchboarded above, all from 1898-9. The suspended floor is boarded. There is a hot-water boiler in the boilerhouse.

The west porch was entirely rebuilt in 1898-9 and its walls are like the vestry walls in all respects. There is a door in both the north and west walls, the former with a Caernarfon head, the latter 2-centred, both from 1898-9. The softwood gabled roof lacks trusses and is matchboarded above, 1898-9; the herringbone-tiled floor lies directly on the substrate and is also from 1898-9

A deep, wide external earth cutting runs along the chancel north wall and vestry walls, partly primary; a shallow, earth-cut external drain runs along the south walls, secondary, exposing footings in areas. The ground level around the church was lowered in 1898-9 exposing footings of nave north wall. There is a below-ground boilerhouse beneath the vestry, and a stairwell along the nave north wall. Floors were raised in 1898-9. There is no underfloor void. Few external memorials lie significantly close to the east wall.

The form of the chancel arch suggests that the chancel (and nave?) may be 13th century. The west porch and vestry are from 1898-9, the former replacing a mid 19th century porch.

The church was restored in 1706 by one ‘Ludovicus Davidem’ (Robinson, 1887, 119-122). Many medieval features were retained, and it is now difficult to assess how much of the pre-1898 fabric and detail was from 1706, and how much belonged to earlier 19th century alterations. The ‘small neat building’ of 1833 (Lewis, 1833) comprised a chancel and nave; a plain west porch was added in the mid 19th century (not shown on NLW, Parish of Abernant, Tithe Map, 1839). The church is depicted on the plans accompanying the faculty application of 1898 (NLW, SD/F/12) and was described in 1887 (Robinson, op. cit.). There was an east window, and 2 windows in the nave south wall; they were 2 centred, with timber tracery and appear to have been inserted, along with 3 buttresses on each of the nave side walls, in the early 19th century, but were rebuilt in 1898-9. The nave north wall medieval window, and the medieval chancel side wall windows, are still present. Two squints were apparently present. The late medieval piscina was moved in 1898-9; there was a further recess in the chancel north wall, for a tomb?. The plain, rounded double bellcote, with semicircular-headed openings, was decayed, and there was one bell. The floor was ‘paved’. A west gallery was present, and a timber screen (date?) separated nave and chancel, now gone. The exterior was ‘whitewashed’; the walls had been ‘well plaistered and whitewashed’ in 1790 and the floor was ‘plain and even’ (Evans, 1922, 6).

It had been intended, in 1898, to retain the roof trusses which were inscribed ‘Ludovicus Davidem, 1706’ and were magnificent, neo-Classical structures with carved braces and a turned king-post (Robinson, op. Cit.); this was not, unfortunately, carried out.

The softwood stalls, pews and pulpit are all from 1898-9.

The exterior has been repointed in the 20th century.

The limestone font has an square bowl from the 12th-13th centuries; the stem and base are from 1898-9.

St Lucia, Abernant, was a parish church during the medieval period (Rees, 1932), of the medieval Deanery of Carmarthen. In 1284 Maredudd ap Rhys Maredudd granted Abernant, with its appendent chapel at Cynwyl Elfed, to Carmarthen Priory (Anon., 1915, 14); the grant was confirmed by Bishop Bek of St Davids in 1290 (ibid.). They had previously (c.1197), and illegally, been granted to the Priory by William de Braose (Evans, 1876, 98). Abernant Church was valued at £9 6s 8d in the ‘Taxatio’ of 1291 (Waters, 1910, 20).
At the dissolution, the advowson fell to the crown but found its way into private patronage. In 1833 the living, a discharged vicarage, rated in the king’s books at £7 13s 4d, endowed with only £200 royal bounty and £1000 parliamentary grant, was in the joint patronage of Edward Lawrence St Loc, Esq., and Mr Parr (Lewis, 1833). Cynwyl Elfed had become a parish but was annexed to the vicarage of Abernant (ibid.).

In 1998 St Lucia, Abernant, was a parish church. The living was a vicarage, held with Trelech a’r Betws, Llanwinio and Eglwys Fair a Churig (Benefice no. 658) in the Archdeaconry of Carmarthen, Rural Deanery of Carmarthen (St Davids, 1997-8).