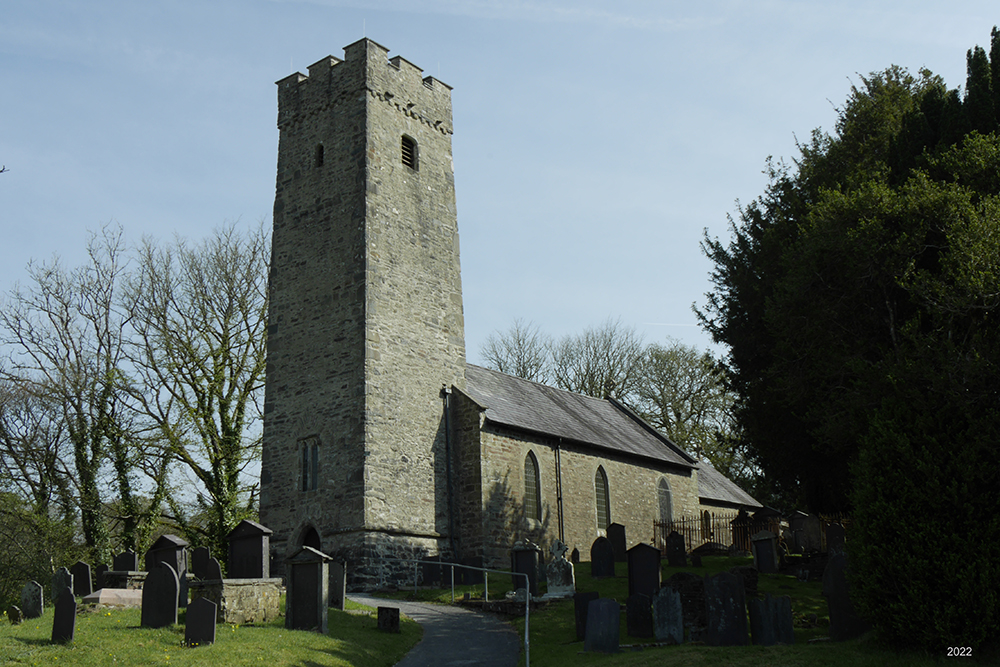 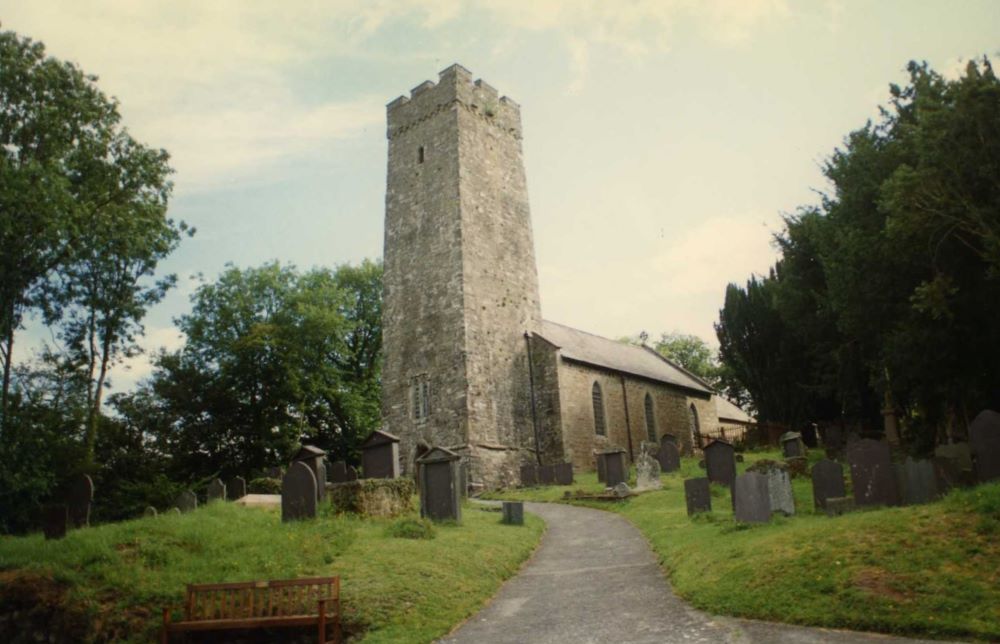 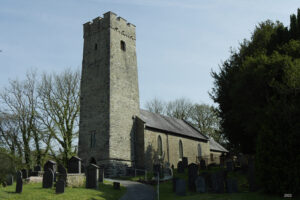 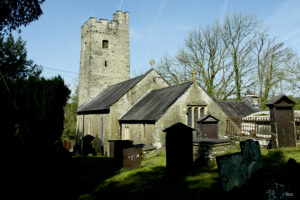 The present church consists of a 2-bayed chancel, a 4-bayed nave, a 4-storeyed west tower, and a 2-bayed transeptal vestry north of the chancel. Construction is in local Silurian rubble throughout (Clive-Powell, 1996, 1); dressings are sandstone and yellow oolite, largely from the later 19th century. Pointing is from the late 19th century, extensively repointed in the 20th century, 1934?. The interior is plastered, and there are the remains of earlier (post-medieval?) plaster. Roofs are slated gables; the tower has a flat lead roof.

The 3-light chancel east window is uncusped, beneath a square, ‘Tudor’, moulded dripmould, from the later 19th century. There is a square, deeply splayed medieval light in the north wall, 13th -14th century, unblocked in 1827; the western half of this wall is entirely open to the vestry, opened in the later 19th century. There are 2 windows in the south wall; both may have medieval openings but the surrounds are later 19th century, comprising a simple square surround in the east window and a 2-light ‘Tudor’ surround in the west window. The east wall displays internal stone brackets either side of the window, medieval, for a former altar beam or statuary, and there is a simple, square medieval aumbry in the south wall; there is no evidence for the two stone ‘credences’ noted in the north wall by RCAHM, 1917. The plain, 2-centred chancel arch is medieval, 13th -14th century; immediately to the north is a high, narrow 2-centred doorway that led to the former rood-loft; the steps up from the east were removed when the vestry was constructed in the later 19th century. A ?softwood collar-rafter roof, probably from 1934, is concealed by a pitch-pine ceiling from 1934. The flagged floor and tiled sanctuary may both be later 19th century, flags re-used?.

The west tower is from the earlier 16th century, comprises 4 storeys and is rather larger than the majority in the region (but cf. Llanwenog and Llanybydder). A square spiral stair turret projects from the eastern half of the north wall, entered through a simple, square, 16th century doorway and lit by simple square slits of similar date. There is an external batter up to a string-course. The west door is 2-centred, 16th century; above it lies a cusped 2-light window beneath a square dripmould of similar date. The ground floor has a 2-centred barrel-vault with 2 bellports. It communicated with the nave through a blocked, plain 2-centred arch, 16th century; a segmental doorway and a 2-centred window have been inserted through the blocking, blocking and openings also 16th century?, the window blocking has an inserted circular opening, 19th century?. It is floored as the nave. The second and third storeys are lit by few simple 16th century slit-lights. The belfry stage has 16th century, uncusped single-light openings, with semicircular heads, in the east, west and south walls, and a square-headed opening in the north wall; the southern opening has been blocked, and there is a Caernarfon headed surround in the eastern opening from 1934.. The parapet lies on an external corbel table, at a higher level around the turret .

There is made-up ground to the north of the church, and beneath the vestry, secondary? contemporary with vestry/former schoolroom?. Deep, wide external cutting around east end of church, partly primary, secondarily deepened (but pre-vestry) exposing footings. Shallow earth-cut external cutting along north wall, medium depth along south wall with shallow drain. The nave floor may have been raised in the 19th century. There is an underfloor heating chamber and flues. Few external memorials lie significantly close to the south wall.

The church was further restored in the later 19th century (ibid.), shortly before 1878 (Anon., 1878, 345). The restoration was of medium-high impact; the schoolhouse was demolished and the present vestry constructed, removing the former rood-loft stair. It was refenestrated, refloored (with a heating chamber and ‘Porritt’s’ stove) and probably reroofed.

The church was sympathetically restored in 1934 (Yates, 1974, 73), in an ‘Arts & Crafts’ manner to the designs of the architect W. E. Ellery Anderson, of Cheltenham (NLW, SD/F/404). The restoration was low-impact; the western gallery was removed, the present roofs were installed, and the present finishes introduced. In addition, the tower windows were renewed.

In 1917 the medieval, cross-incised altar-slab was reinstalled, having previously been used as a seat outside the west door (Anon., 1917, 81; RCAHM, 1917). The softwood, free-standing stalls and pews are later 19th century, along with the wainscot dado in the nave. The pulpit may be from 1934.

The limestone font has an square bowl and stem from the 13th– 14th century.

A cist cemetery was apparently discovered within the area occupied by the present, extended cemetery in 1877 (Anon., 1878, 345).

St Luke or St Llonio, Llanllwni, was a parish church during the medieval period (Rees, 1932), of the medieval Deanery of Stradtowy. The church and living were possessions of the Bishops of St Davids, but in 1291 the parishioners assigned their portion of the parish and glebe to the Augustinian Priory of St John at Carmarthen (Anon., 1915, 14), licensed by Edward II in 1308 (ibid.). The church was fully alienated to the priory by Bishop Gower in 1333 (ibid.). After the dissolution the tithes were obtained by the Bishop of Lincoln and were not restored to the parish until 1883 (Evans, 1908, 54).

In 1998 St Luke or St Llonio, Llanllwni, was a parish church. The living was a vicarage, held with Llanybydder and Llanwenog (no Benefice no.) in the Archdeaconry of Cardigan, Rural Deanery of Lampeter and Ultra-Aeron (St Davids, 1997-8).