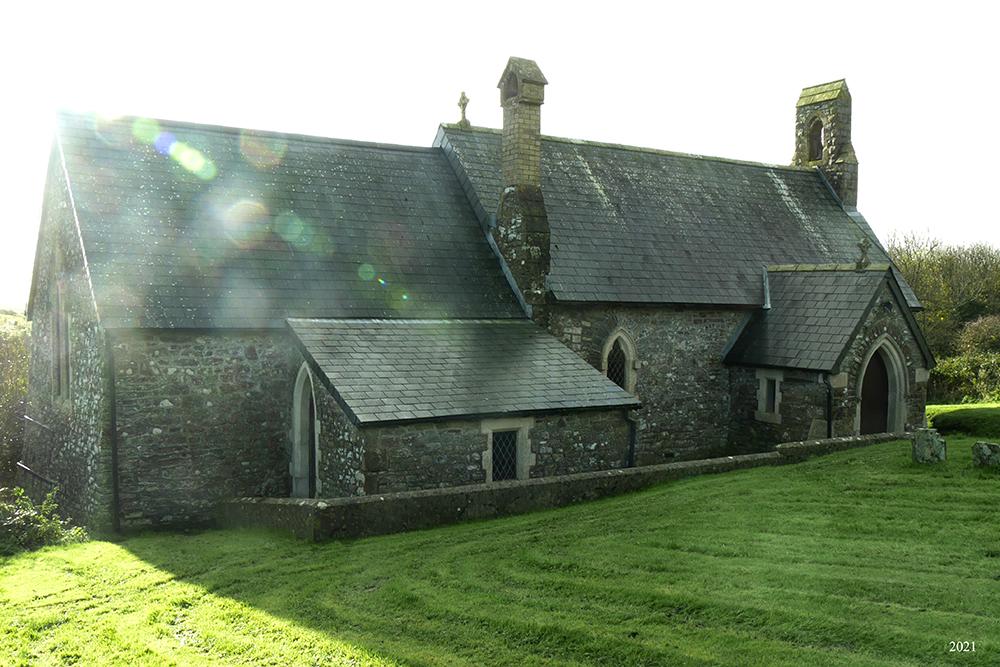 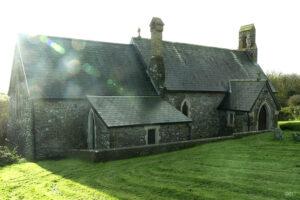 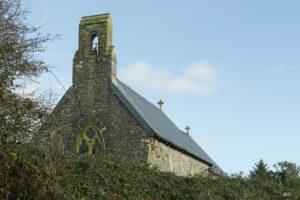 The present church consists of a 2-bayed chancel, a 4-bayed nave of the same width, a north porch and a lean-to vestry north of the western 2/3 of the chancel. Construction is in medium-sized limestone rubble throughout, unsquared and uncoursed, with crude medieval quoins. The external ribbon pointing is probably all 1928 (Pembs. R. O., HPR/51/40); the internal plaster finish is now confined to the east, west and north walls. Slated gable roofs, the chancel and porch roof lying at a lower level than the nave roof; the vestry has a slated lean-to roof continuing the chancel northern roof slope.

The vestry walls, the chancel north wall and the north wall of most of the nave lie within a deep, wide revetted cutting, now with concrete flagging. In essence the cutting is primary, into the south facing hillslope, but was extended, and probably deepened, when the vestry was built in 1883. A medium-depth secondary earth-cut cutting runs along the south wall, exposing its footings. There is no evidence for any changes in internal levels. The flooring is suspended throughout. There is a below-ground heating chamber in the nave, and the passages overlie a heating duct from 1883. No further internal crypt or vault is evident. There is no physical evidence for any former components beyond the present church, but a west porch from the 18th or 19th centuries was formerly present.

In its basic form of chancel and nave, the church has changed little since the medieval period. They are of the same width and probably contemporary, but in the absence of detail cannot be closely dated; the ‘Norman’ window seen by Glynne in 1851 (se below) may date them to the earlier 13th century (rather than the 12th century in Pembrokeshire). The chancel arch is from 1883 but its predecessor was 2-centred (see below), suggesting that it was inserted in the later medieval period (and the chancel possibly lengthened). Opposing north and south doors were formerly present; the south door is blocked but its rounded 2-centred arch conforms with a 13th century date, while the north door was entirely rebuilt in 1883. A blocked window partially visible in the nave south wall has a segmental rear-arch of any date. The internal masonry benching on the nave west wall is probably medieval. A bellcote may have been present from the first.

The pre-restoration church may have followed the same general plan as its successor, but was very different in its arrangements. In 1833 it was dismissed as ‘not distinguished by any architectural details of importance’ (Lewis, 1833), but a detailed description of the church was written in 1851 (Glynne, 1885, 218) and is reproduced here almost in full. The building comprised the present chancel and nave, but was entered from the west via a ‘modern’ porch, erected during the 19th century (or even 18th century?). The north door had by this time been closed; the south door is not mentioned, and must have been closed for some considerable time, perhaps at the Reformation). There was a small, squares western single bellcote, similar to its 1883 successor. The remainder of the features noted were all lost at in 1883. The former chancel arch is described as ‘pointed, but very rude, without moulding, and much depressed’, while one of the north wall windows appeared ‘Norman, but now altered’. The remainder of the windows were ‘modernised’, probably meaning timber framed 2-centred windows or sashes. The chancel south wall exhibited internal stone benching, while there was a ‘stone bracket’ somewhere in the nave – a rood corbel?; both have now gone. The external walls were whitewashed, but ivied. The nave was furnished with 12 box pews, with the squire’s pew in the chancel (Davies, n.d., 12).

Plans were and specifications were drawn up in 1868, for a very high impact restoration, by the architect K. W. Ladd of Pembroke Dock (Pembs. R. O., HPR/51/23-33). The proposed work amounted to a rebuild, with only the core of the existing south wall being retained. A large west tower was anticipated, which included the main entry to the church in its lower stage. In other respects, the plan components were similar to those now present. In the event, financial limitations prevented the proposed work from being commenced (Davies, n.d., 14).

The church was eventually restored in 1883 (Davies, n.d., 14), to the specifications of the Architect R. H. Barber. The restoration was of high impact and new components were built. The external cutting along the north side was re-excavated, deepened, and extended to take in the new vestry; the cutting to the south may be contemporary. An unknown percentage of the walling was renewed; no breaks are visible but some of the external surfaces appear later. The features mentioned by Glynne (see above) – the chancel benching, nave bracket and ‘Norman’ window – were lost. The west porch was removed and the door blocked; no evidence for its former presence is now visible. The nave west wall was given a single bellcote of squared and coursed limestone rubble, with a square, oolite coped top, similar shoulders and a 2-centred oolite surround. The chancel arch was entirely rebuilt as a large, 2-centred arch with oolite mouldings. The nave north door was unblocked and its surround was rebuilt in a similar fashion. The entire church was refenestrated, largely with simple lancets with oolite surrounds, but the east and west walls were given 2-centred 2 light windows with simple tracery. The chancel east bay was refloored with tiles; the west bay and nave passages were tiled and flagged, suspended board floors being inserted beneath the new softwood seating in the nave. A ‘Porritt’s’ underground heating apparatus was installed beneath the nave passage, its flue running to a chimney north of the chancel arch, with a limestone base, a square brick stack and a gabled oolite cowl. The church received entirely new softwood roofs, with scissors-braced common rafters, but no upstands or tabling were built. The interior was replastered but the extent of removal of the old is unknown. Fittings from this restoration include the pews, the altar rail (now moved?) and oolite pulpit. The font was probably moved to its present position by the north door (see below).

The north porch was built new in 1874, in similar rubble to the rest of the church, with coped buttresses and a 2-centred moulded oolite doorway and square-headed oolite windows; it has a softwood scissors-braced collar-rafter roof and the tiled floor appears to be laid directly on the substrate. The large vestry was also an entirely new component, again similar in style, with 2-centred oolite doors, a window as in the porch, a lean-to roof and suspended floor.

The font has a square, scalloped limestone bowl, a cylindrical stem and a square base, all of the 12th-13th centuries.

(Documentary evidence for the medieval church has the separate Dyfed PRN 3124).

Haroldston West Church was not a parish church during the post-conquest period, but a chapelry of the medieval Deanery of Rhos (Rees, 1932). The benefice was a perpetual curacy which was, in 1368, conferred upon St Mary’s College, St David’s, by Bishop Adam de Houghton (Green, 1911, 309). The church was termed ‘Haroldston by the Sea in Ros’ in the grant. It appears in the list of possessions of the college in 1536, when the revenue received from the church was £6 13s 4d (ibid.). At the dissolution the possessions of the college, including Haroldston West, fell to the crown.

In 1786 the living was a perpetual curacy in the patronage of the Master and Fellows of Pembroke College, Oxford, and Lord Milford (ibid.), the certified value of the benefice being £5. In 1799, Lord Milford’s interest terminated and all subsequent presentations were, until 1908, made by Pembroke College. In 1833 the living, of the Archdeaconry of St Davids, was endowed with £400 royal bounty (Lewis, 1833).

In 1998 St Madog, Haroldston West, was a parish church. The living was a vicarage, held with Walton West and Talbenny (Benefice 578) in the Archdeaconry of St Davids, Rural Deanery of Roose (St Davids, 1997-8).

(The earliest reference to a dedication is in 1373, when the church was described as ‘St Aidan in Villa Haroldi’ (RCAHM, 1925, 108). The name ‘Madog’, is merely a hypocoristic version of Aidan; St Aidan/Madog is normally regarded as having founded the cathedral at Ferns in Co. Wexford, and is known as ‘St Madog of Ferns’.)