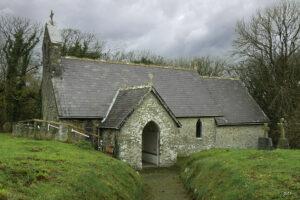 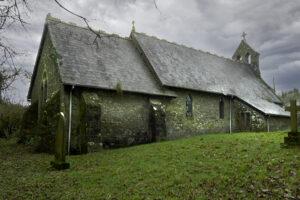 The present church consists of a 2-bayed chancel, a narrower 4-bayed nave, a single bayed lean-to vestry north of the nave, towards its west end, and a south porch opposite. There was formerly a (medieval) south transept.

Construction is in medium-large limestone rubble throughout, the medieval work unsquared and uncoursed, without quoining; later work is quoined. Good ribbon pointing, 1876, with areas of poor 20th century cement repointing. The internal walls are rendered/plastered. Roofs are slated gables, the nave roofed at a slightly higher level than the chancel; the vestry roof is a slated lean-to.

Medieval features now present in the chancel include limestone brackets low in the east wall, either side of the window, and formerly associated with niches (see below). A recess of unknown form in the east bay south wall has been plastered over – former piscina?. The west bay south wall displays the external the lintel and sill of a blocked, square headed window of possible medieval date – it may have been blocked between 1851 and 1876 (see below). The chancel arch, and east window, are later rebuilds. The chancel south wall displays, at its west end, a very rough area of external facework, produced out slightly and nearly full height; it has been patched over the joint with the east wall of a former south transept. A vertical line of quoins in the medieval fabric of the nave south wall represents the west quoin of the former transept arch. The transept was gone before 1851 (see below).

The nave has been largely rebuilt but retains its medieval north and south doors; the south door was always the main entry but both have similar 2-centred surrounds of 13th-14th century date. There is no evidence of any former west door. The west wall has a pronounced external batter throughout its height and continues as a full-height, raking buttress on the north wall; it is not, however, suggested that the wall ever extended any further north. The south-west corner of the nave has internal stone benching. The west wall kneelers may be medieval, but the bellcote is later. A corbel internally mounted on the nave north wall has a moulded grotesque of the Holy Trinity, of possible 14th century date, probably not in situ; it may have formed the base of a Jesse Tree. The nave windows are all later.

The south porch is vaulted with a transverse rib-vault, unusual for the region (but also seen at Roch), Perpendicular in style and dateable to the earlier 16th century. The walls are quoined and probably contemporary; they feature internal benching. The door has a 4-centred rear-arch but the surround is later. At the north end of the east wall is a second, blocked door (again cf. Roch) with a depressed, semicircular head; it is now an internal recess housing the torso of an effigy of a mailed knight, of 14th century date, described in 1908 (Laws and Edwards, 1908, 386). Two plain stoup bowls lie loose in the porch; a third, simply moulded stoup bowl lies loose in chancel.

A cutting surrounds the church, shallow and earth cut in the eastern half and becoming deeper towards the west; it is deep and revetted at the west end, but mainly primary throughout and nowhere are footings exposed. There is no evidence for floor level changes. The floors are suspended in the nave and vestry. A crypt/vault lies beneath the chancel, and an infilled stairwell immediately beyond its east wall. A south transept formerly existed.

The church has been much rebuilt but the basic plan of chancel, nave and south porch follows the medieval arrangements. The medieval building was entered through north and south doors in the nave, still open. A south transept was formerly present, but has been removed.

The earliest part of the building is probably the nave, possibly 13th century in origin; the large, wider chancel is an addition, and, though detail has been lost, may be dateable to the 14th century in comparison as are large chancels added to other churches in the region (cf. Hodgeston). The former south transept may have been contemporary with the chancel, or from the 15th century. The south porch is earlier 16th century.

There has been much succeeding, but pre-restoration work at the church. A below-ground crypt/vault was established east of the chancel, with a 2-centred external opening still visible low in the east wall, blocked in 1800 when the steps down to the vault were infilled. Some kind of masonry enclosure had been built around the vault entrance c.1700, against the east wall, but in 1789 the remains of its side walls were in a ‘ragged state’ (Green, 1913, 228). In that year they were taken down and the chancel was new roofed, ceiled and plastered, and given a new east window. In 1801 the medieval chancel arch was ‘widened and raised’ (ibid.), into the plain, full-centred semicircular arch now present. It may have been now that the chancel was refloored with the present black-and-white tiles.

In c.1811 the church was described as ‘a low, undignified structure, and has nothing within or without to demand the attention of the antiquary but the porch’ (Fenton, 1903, 87). The church was subject to a fuller description in 1851 (Glynne, 1885, 215), and is here reproduced in full, and in conjunction with the plan that accompanied the Faculty submission of 1876 (NLW, SD/F/524). The church was much as today, the south transept having already been removed. The rebuilt chancel arch and east window were thought by the author to be original medieval features, the arch being ‘rude and round, with an impost on the north’, as today. The east window appeared Gothic, and had ‘two lights with a plain mullion, surmounted by a depressed hood which has foliated corbels…in the angle of this window, internally, are shafts with First Pointed capitals’ – all 1789 neo-gothic? The bracketed niches either side were noted. There were no further windows in the chancel, as at present. The nave north door was open (called the ‘west door’ in 1851 – author’s mistake?), and had a 2-centred head. The south door and porch were noted. There were 2 windows in the nave north wall, both east of the north door, described as ‘bad and modern’ and were presumably the usual sashes. The southern windows were called ‘square-headed and poor’ and possibly 16th century?; one of these probably represents the present blocked chancel south window (see above) as only one is shown in 1876, in the nave south wall east of the porch. There was a western double bellcote. The entire church was whitewashed. There was a western gallery, 10 box pews in the nave, and a triple decker pulpit. The deep, revetted cutting around the west end is shown on the plan. The church was extensively re-roofed in 1861 (Pembs. R. O., HPR/31/12).

The church was restored in 1876 (NLW, SD/F/524), following specifications by the architect E. H. Lingen Barker, of London, Hereford and Tenby. The restoration was high impact. The chancel east wall, and the nave north and south walls were truncated to window sill level and rebuilt in squared limestone rubble. The church was refenestrated, with neo-gothic windows; the chancel east window comprises 2 cusped lights with a central quatrefoil in a 2-centred oolite surround, while the nave side walls were given simple lancets, only the 2 in the east bay in existing openings. The western bellcote was rebuilt, as a gabled double bellcote in squared limestone rubble with shoulders and 2-centred openings in oolite. The porch door was rebuilt with a 2-centred surround. Internal walls were replastered, all existing plaster apparently being removed. The western gallery was removed. The church was re-roofed, in softwood, the chancel with a ‘wagon-roof’ ceiling, while the nave common rafters all have scissors-braces; oolite weather tabling was also built. The nave passages, and the south porch, were polychrome tiled, with suspended board floors; the present seating may be later (see below). The present altar rail and pulpit were installed.

A vestry was built against the nave north wall, opposite the porch and entered through the former north door. It is of squared limestone rubble with a square-headed, 2-light window in a square oolite surround. It has a softwood lean-to roof continuing the nave roof northern slope, and a suspended board floor.

There has been a fair amount of further work. The raking buttresses against the chancel exterior, 2 on the east wall and 2 on the north wall, were built in the earlier 20th century, probably in 1924 (Pembs. R. O., HPR/31/59). The softwood stalls and desk, free-standing on the chancel floor, are from c.1900 (Pembs. R. O., HPR/31/53); the pews are similar, also replaced c.1900?. The exterior was repointing in the later 20th century. The external cutting was extended around the south side of the church, also later in the 20th century (Canon A. Craven, pers. comm.)

The limestone font is medieval, with a square scalloped bowl, cylindrical stem, and square base, of 12th-early 13th century date.

At the dissolution the advowson fell to the crown, although Sir William Perrott of Haroldston, who held the Barony of Roch, attempted to claim patronage (ibid.). In 1786 the discharged rectory of ‘Nolton alias Knowleton’ had an annual value of £40, rated in the king’s books at £4 2s 11d and by 1833 was endowed with £400 royal bounty (Lewis, 1833), in the Archdeaconry of St Davids and in the patronage of the king.