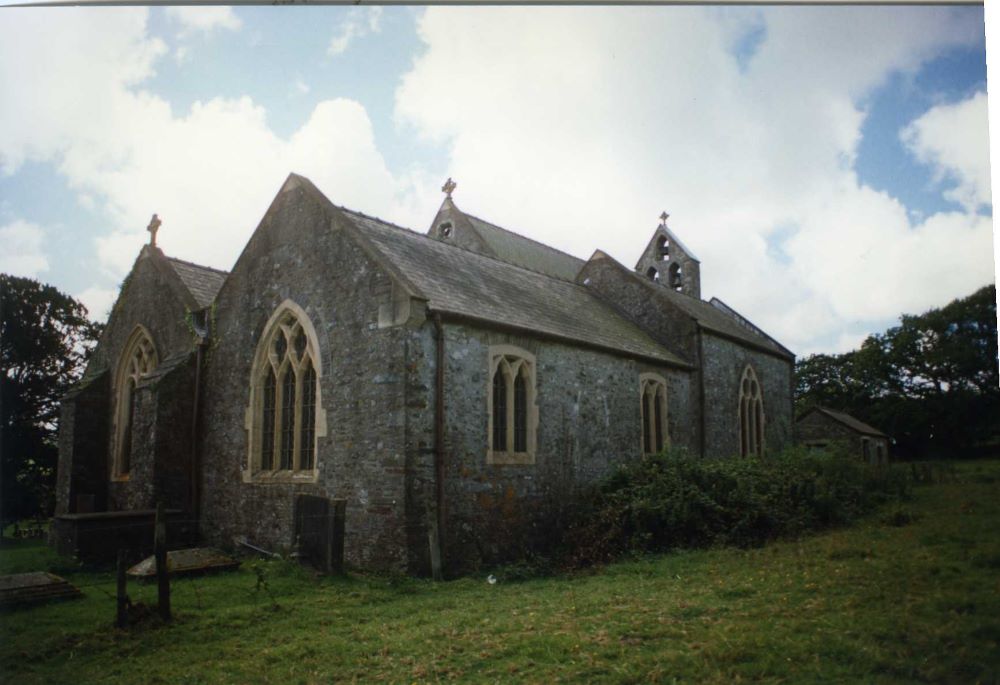 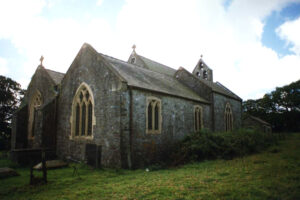 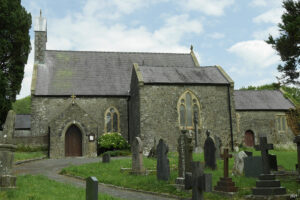 Reason for Listing: Listed for its architectural interest as a medieval church with the unusual arrangement of transepts parallel to the nave, and with good interior detail.

Archaeological potential – good. Shallow, external cutting around 20% of church; deep cess-pit adjacent to 5% of church; floor levels unchanged?; suspended floors above heating flues in 50% of church; below-ground floor in 10% of church; many external memorials significantly close to 50% of church.

The present church consists of a 2-bayed chancel, a 3-bayed nave, a 2-bayed north chapel, single-bayed north and south transepts gabled parallel to the nave, a south porch and a west porch converted into a heating chamber. Construction is in limestone rubble, with some Old Red Sandstone; dressings are mainly yellow oolite and from the later 19th century. Pointing is from the later 19th century; there has been some 20th century repointing and the interior is plastered. Roofs are slated gables throughout.

The transepts lie parallel to, rather than transeptal to, the nave into which they open via arches like the chancel arch and similarly 14th century. The side wall of each has window like those in the nave, and similarly from the later 19th century, but 3-light. The west (side) wall of the north transept has a window like the nave. The south transept east (side) wall has a 15th century single, cusped lancet and the jamb of a medieval, blocked window is visible in the opposite, west wall. The transepts are roofed as the north chapel, and floored as the nave, beneath a 20th century suspended floor in the south transept..

The west porch is medieval but was converted into a heating chamber in c.1900. The doorway has a depressed, 2-centred head from c.1500. The flue is in the north wall and has a red-brick chimney stack, c.1900. The floor is below churchyard ground level.

There is a shallow, external earth cutting along the north side of the nave. A deep cess-pit lies adjacent to the north-west corner of the nave. There is no evidence for changes in floor level. Floors are suspended above heating flues in the nave and transepts. There is no underfloor void in the chancel and north chapel. The west porch has a below-ground floor. Many external memorials and family tombs lie significantly close to the south and east walls.

The chancel arch is wider than the chancel suggesting that it, and the nave, were added to a pre-existing chancel. The transept arches are similar in form, therefore the nave and transepts may be 14th century additions to a 13th century chancel; the work, however, was not continuous, there being a joint between the nave and the south transept. The south porch was probably and addition of the 15th century, while the west porch appears to be later, from c.1500. The north chapel is from the earlier 16th century. There were 2 bells in 1552 (Wallcott, 1871, I), and in 1684 when they required new wheels and ropes (Evans, 1915, 94).

The church underwent a period of abandonment and dereliction prior to its being restored in 1825 (Churchwarden, pers. Comm.). The arch between the north transept and the north chapel, which had, for some years, been blocked, was opened up and ‘rebuilt’ (ibid.). The chancel south door (and the nave south door?) received new surrounds while the chancel buttresses may now have been added. The triple bellcote belong to this restoration, as may the north chapel floor. There is evidence that the church was reroofed; it was probably also refenestrated and reseated. The tithe map of 1842 (NLW, Llandyfaelog, 1842), shows the church as comprising only the chancel, nave and transepts but is stylised and unreliable.

The church was restored again the later 19th century when it was entirely refenestrated, reroofed and refloored; the south porch was partly rebuilt and the interior was reseated and replastered.

The west porch was converted into a heating chamber in c.1900.

The roofs were reslated in the early 1990s (Churchwarden, pers. comm.).

The octagonal font is 20th century..

The patronage eventually fell into private hands. In 1833 the living was a vicarage in the patronage of the trustees of the late patron, John Mellor Esq.; it was rated in the king’s books at £9 13s 4d, and endowed with £200 royal bounty and £1600 parliamentary grant (ibid.).

In 1998, St Maelog, Llandyfaelog, was a parish church. The living was a vicarage, held with Kidwelly (Benefice no. 685) in the Archdeaconry of Carmarthen, Rural Deanery of  Cydweli (St Davids, 1997-8).

Waters, E. J., 1911, ‘Among the Tombs’, Transactions of the Carmarthenshire Antiquarian Society Vol. 6.