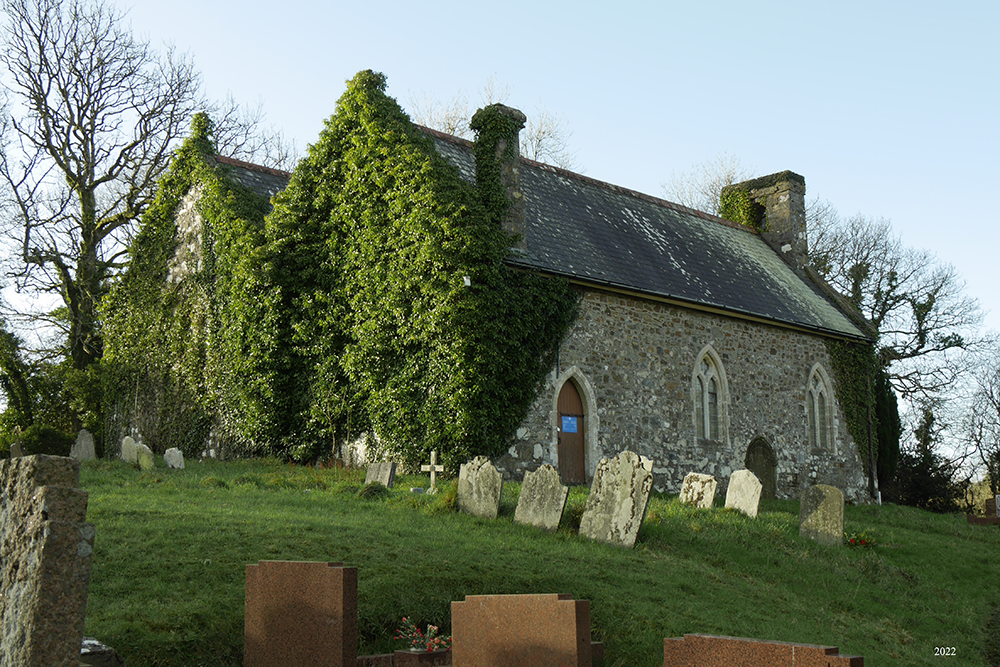 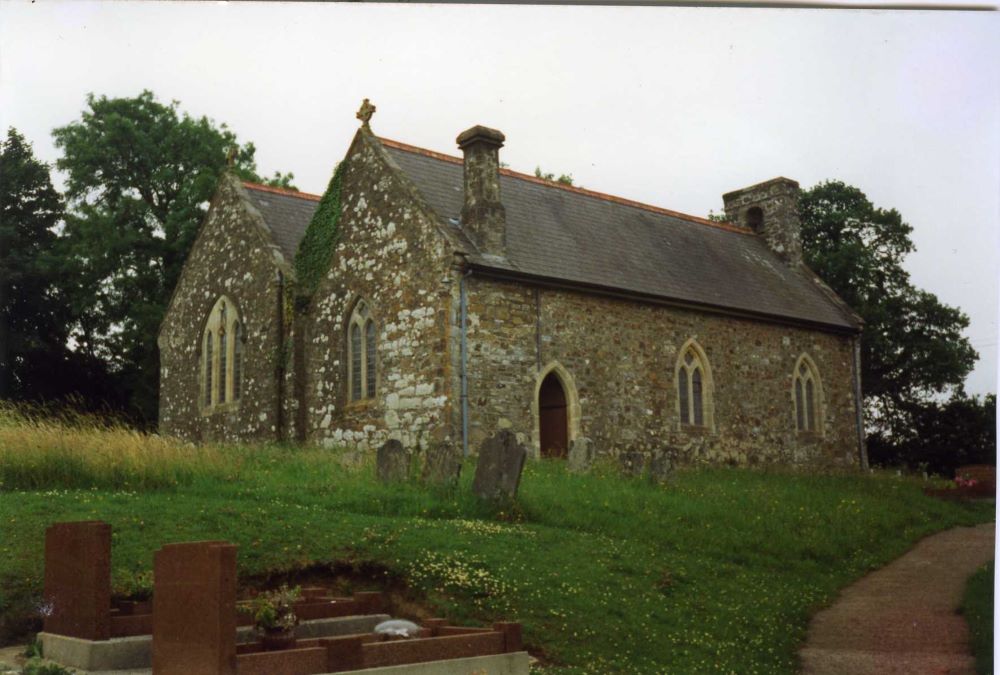 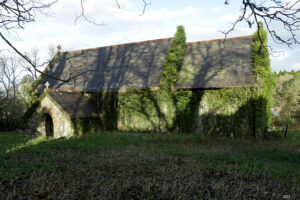 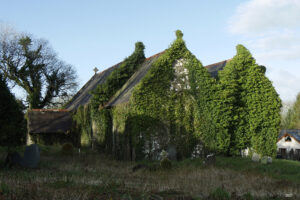 Reason for listing: Listed as basically a mediaeval church, heavily restored, but with traces of early features in the chancel; and including an interesting early priest’s effigy and very good font.

The present church consists of a single-bayed chancel, a 3-bayed nave, a 3-bayed north aisle and a south porch. Construction is in limestone rubble. The chancel arch and aisle arcade are medieval, and there are medieval – 17th century windows in the chancel; the south porch door is 17th century while the bellcote, which occupies the north aisle, is 17th – 18th century. Other openings, and the grey oolite dressings in ‘Early English’ style, are from 1897. Pointing is mainly from 1897, with some poor 20th century repointing of the west walls, and the interior is plastered except the chancel east wall and the arcade. Roofs are slated gables.

The chancel east window is a graduated triple-lancet, uncusped except the central lancet, in grey oolite from 1897. The south wall is pierced by 2 windows. That to the east is a single lancet with weathered cusps in limestone from the 14th-15th century, the reminder of the surround having been rebuilt in 1897; the embrasure features an arched cut-out for a plain sedilia seat in the eastern reveal, also medieval. To the west is a single light with a square surround in weathered, chamfered limestone from the 16th – 17th century. The chancel arch is plain, semicircular, with plain square imposts, from the 12th century?, or from the 17th-early 18th century?. The softwood king-post roof is from 1897 and is matchboarded over. The sanctuary is oolite flagged, from 1897, said to lie above an earlier black marble slab (guide in church); the passage is tiled, with woodblock flooring, also from 1897.

The nave is lit by an uncusped  2-light window in the south wall, with plate tracery featuring a central quatrefoil, in grey oolite from 1897. The west is the south door which has a double-chamfered, 2-centred surround also in grey oolite from 1897; above it, the internal face exhibits an earlier corbel for a former roof, medieval?. The west wall is pierced by a window like that in the south wall and also from 1897, but occupying an earlier opening with a segmental head, date?, medieval?. A feature, of unknown nature, may be represented by an area of irregular plaster in the north-west corner. The nave roof is similar to that in the chancel and also from 1897. The passages are tiled, with woodblock flooring, also from 1897.

The north aisle communicates with the chancel via a plain, low, 2-centred arch from the 15th century, and with the nave through an arcade of 2 similar arches with a central plain, cylindrical pier. The aisle is lit by a window in the east and west gable walls, and 2 windows in the north wall; all are like those in the nave and from 1897. There is a doorway into the churchyard in the north wall with a chamfered 2-centred surround in grey oolite from 1897. On the west wall is a square, single bellcote with a plain, semicircular-headed opening, all from the later 17th – earlier 18th century. Internally, a plain, square medieval piscina recess lies the east bay south wall; a later 19th century, oolite fireplace occupies the north-east corner of the aisle and leads to a plain, square contemporary chimney. Roofed and floored as the nave, from 1897; the east bay is used as a vestry and the floor is in woodblock throughout.

The south porch doorway is a plain, semicircular arch with large voussoirs from the earlier 17th century. The side walls feature contemporary masonry benching but are pierced by single lancets from 1897. The softwood roof lacks trusses, all rafters being collared, with matchboarding, all from 1897. The flagged floor is earlier 19th century.

A deep, revetted external drain runs around the east, west and south walls, exposing the footings of the north-west corner of the nave and the west wall of the south porch; a deep cutting runs close to the south-west corner of the church. A pronounced earthwork platform extends beyond the chancel east wall terminating as a ‘D’ shape, and a similar platform lies beyond the north aisle east wall but is square-ended; both are cut by 19th century burials.  Floor levels have been raised. Floors are suspended above a void. External memorials lie significantly close to the north, east and west walls.

The semicircular chancel arch is normally regarded as 12th century but may, like the 17th – early 18th century bellcote, be a neo-Classical rebuild; however the chancel is short, and with the nave it may be early though the present windows are 14th – 17th century. The north aisle is probably 15th century. The south porch detail is early 17th century. ‘Traces of a squint and possibly a piscina’ were visible to the south of the chancel arch in 1896 (Pembs. R. O., HPR/41/46) and were thought to be later than the arch; all evidence of these has been lost.

The church was restored in 1842 by Hugh Hoare of Lawrenny (Pembs. R. O., HPR/41/30). The restoration was ‘cheap and unecclesiastical’ (NLW, SD/F/481) and included the insertion of 5 new timber-framed windows with ‘Venetian shutters’, and a new roof of poor quality including some thatching (temporary?). Some internal repairs were undertaken and the seating improved in 1850 (Cadw, 1997, 1).

Work was undertaken on the chancel in 1879 (ibid.). Possibly contemporary with this work, and certainly before 1897 (Pembs. R. O., HPR/41/46), was the conversion of the north aisle east bay into a vestry, with the present fireplace and chimney.

A further restoration occurred in 1897 to the designs of the architect E. V. Collier of Carmarthen (ibid.; Pembs. R. O., HPR/41/46). The church was refenestrated and windows were inserted in the porch side walls, but the chancel south wall windows were retaining/re-opened. The north aisle north door was inserted and the south door was rebuilt. The church was reroofed, refloored, reseated and replastered.

The softwood stalls, pews and pulpit are from 1897, like the softwood vestry screen in the north aisle. The chancel fittings, except the altar rail from 1897, were installed in 1935 (Pembs. R. O., HPR/41/32). The organ in the north aisle may be 20th century and was installed in 1964, having been brought from a Yorkshire church (Cadw, 1997, 2). A loose altar table was moved from the nearby church at Yerbeston in 1983.

The limestone font has a square bowl, on a cylindrical stem and base, possibly from the 13th century.

There is one bell in the bellcote.

The chancel contains a memorial slab featuring a moulded human priest’s head and a 15th century inscription, not in situ (RCAHM, 1925, 219), revealed in the 1879 chancel restoration.

Reason for listing: Listed as basically a mediaeval church, heavily restored, but with traces of early features in the chancel; and including an interesting early priest’s effigy and very good font.

The pronounced earthwork platform extending beyond the chancel east wall terminates as a ‘D’ shape, and may be structural, relating to an earlier east end?; a similar platform lies beyond the north aisle east wall but is square-ended. Both are cut by 19th century burials and may themselves merely represent grave earthworks.

At the dissolution, the living fell to the crown but was sold to the Barlows of Slebech (ibid.). In 1833 the living was a discharged rectory rated in the king’s books at £4, endowed with £200 royal bounty and £400 parliamentary grant, and in the patronage of Lady Mansfield who owned the great tithes of the parish (Lewis, 1833). The parish was united with Lawrenny in 1918.

In 1998 St Marcellus, Martletwy, was a parish church. The living was a rectory, held with Lawrenny, Minwear, Yerbeston and Templeton (Benefice 816) in the Archdeaconry of St Davids, Rural Deanery of Narberth (St Davids, 1997-8).