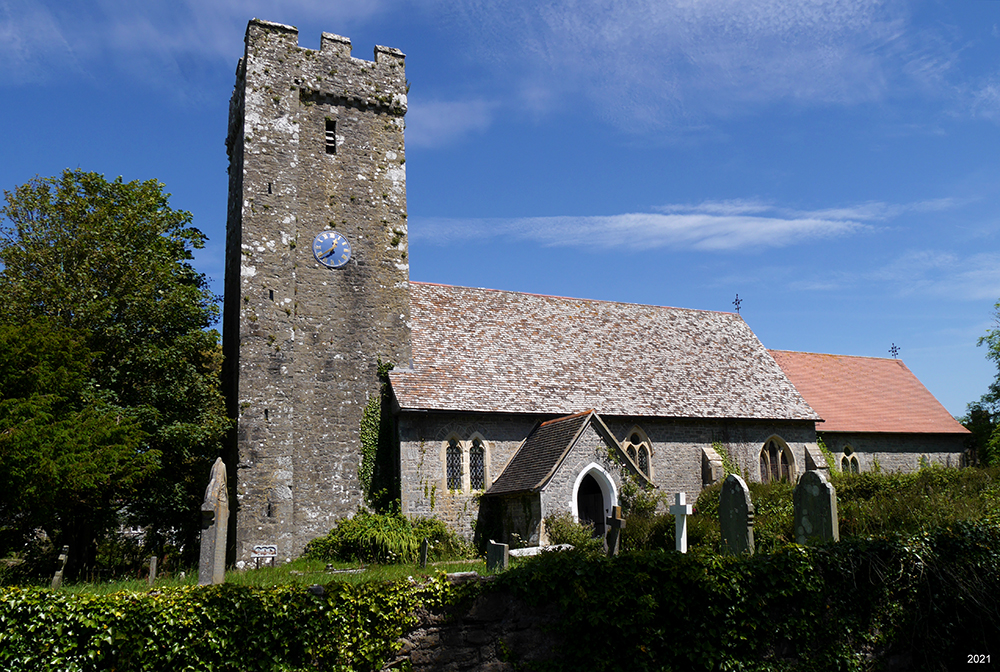 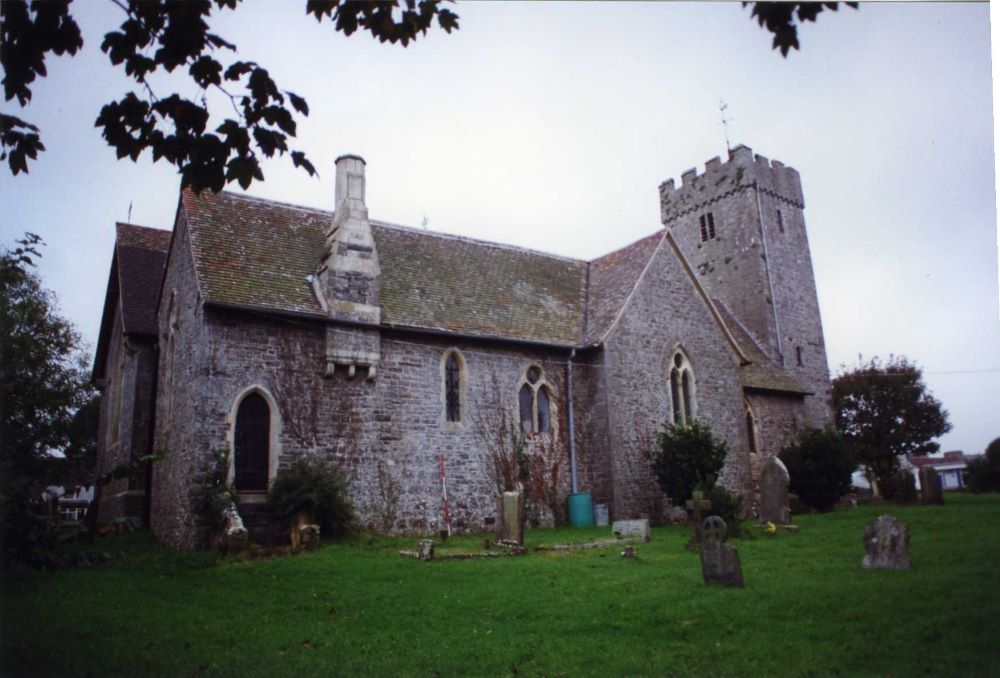 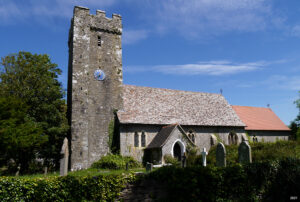 Group value – high. Medieval landmark church with tower, in coastal location; central within Anglo-Norman planted village with many nearby medieval buildings including a pele-tower, dovecote and hall-house; churchyard with medieval mortuary chapel and remains of churchyard cross.

The present church consists of a 3-bayed chancel, a 3-bayed nave, a 2-bayed north chapel continuous with a single-bayed vestry to the east, a single-bayed north transept, a south porch, a 3-storeyed west tower. There may formerly have been a south transept. Construction is in limestone rubble, with some Old Red Sandstone; pointing is mainly from 1853 and 1880, and the interior is plastered. The tower has medieval openings, including rebuilt tracery, and a barrel-vault, and there is a blocked ?medieval window in the nave. All other openings, including the chancel arch, are from 1853 and 1880, in yellow grey oolite and Early English in style. Roofs are gables, both slated and tiled; the tower roof was not seen.

There are a number of 17th – 18th century memorials, not all in situ.

The chancel was rebuilt/refaced in roughly squared and coursed rubble in 1853, with a basal chamfered oolite offset. The contemporary 3-light east window has cusped, neo-geometric tracery in a 2-centred surround and drip-mould on human mask stops, all in chamfered oolite. There is no upstand, the roof overhang lying on plain oolite corbels at eaves level, also from 1853. There are 2 windows in the south wall, that to the east being a cusped single lancet with a sedilia in the sill, from 1853. The western window is an uncusped double-lancet with a quatrefoliate spandrel, yellow oolite, in a 2-centred outer arch with infill, presumably from the 1880 restoration. The plain chancel arch with a chamfered inner order on ‘stiff-leaf’ corbels is from 1853. The softwood chancel roof is from 1853 and has princess-posts cusped to form a quatrefoil and double-trefoil pattern; the collars are arch-braced from contemporary wall corbels and the whole is matchboarded over. The passage is tiled, with suspended board floors also from 1853.

The nave south wall was rebuilt/refaced, like the chancel, in 1853, with 2 stepped external buttresses; the north wall is in random limestone and Old Red Sandstone rubble from the medieval period. There are 2 windows in the north wall and 3 in the south wall, all in yellow oolite from 1853. The eastern north wall window has 2 uncusped lights in a 2-centred surround with a circular light in the spandrel and a plain drip-mould; the western window is similar but the lights are cusped, the spandrel is quatrefoliate and the drip-mould lies on ‘stiff-leaf’ stops. There is a blocked window at the west end of the north wall retaining some voussoirs, medieval?. The east bay is lit by a partly cusped, 3 light window in the south wall, in a 2-centred surround with pierced spandrels. The central south wall window is like the east window in the north wall, while the west window is a cusped double-lancet. The south door lies between the 2 latter windows and has a simple chamfered surround from 1853. The nave is roofed and floored like the chancel, both also from 1853.

The north transept was partly refaced in 1853, like the chancel but without the offset. It is entered through a double-chamfered 2-centred arch from 1853, and lit by a window like that in the centre of the nave north wall also from 1853. The softwood roof, from 1853, lacks trusses, all common rafters having collars. Floored as the chancel and nave. The transept became a memorial chapel, with the relocation of a number of monuments and tablets, in c.1900.

The south porch was entirely rebuilt in 1853 with facework like that in the chancel; there are clasping buttresses at the corners. The internal walls have contemporary masonry benching with oolite seating.  The main south door is a plain, chamfered 2-centred arch. The softwood roof, also from 1853, lacks trusses, all rafters having collars. The contemporary tiled floor is laid directly on the substrate.

The west tower, of limestone rubble, is not entirely typical of the region, lacking an external string-course and having only a slight external batter; stylistically, however, like many towers it belongs to c.1500. It is not tapered. A square spiral stair turret projects from the south-west corner, entered through a plain square-headed doorway with a sill below the present floor level, from c.1500, and lit by simple loops. The ground floor is entered from the nave through a plain, 2-centred arch that reflects the profile of the barrel-vault. There is a blocked doorway in the west wall, of uncertain form, its dressings having been robbed. Above it lies a cusped, 2-light window, in limestone from c.1500 but partly rebuilt in yellow oolite, with a segmental drip-mould on rounded stops. The floor is fully carpeted but may be tiled like the chancel and nave; it may have been raised. The second stage is lit by a simple square-headed light in the north face. The belfry stage has 2-light openings with square-headed limestone surrounds, in segmental-headed outer arches, in the east and west faces, and similar single-light openings without outer arches in the north and south faces, all from c.1500; the east face openings are associated with 2 corbels at sill level, function?. The crenellated parapet lies on an external corbel table that does not continue around the stair turret.

The north chapel was added in 1880 and forms a continuous unit with the vestry to the east (see below), with roughly squared and coursed facework like that in the chancel. It communicates with the chancel through a contemporary arcade of double chamfered, 2-centred arches. The north wall is pierced by a single lancet to the east, and an uncusped 2-light window with a circular light in the spandrel to the west, both in chamfered yellow oolite from 1880. The softwood, scissors-braced roof is also from 1880 lacks trusses and is matchboarded over. Floored as the chancel and nave but from 1880.

The vestry lies at the east end of the north chapel, from which it is divided by an internal wall. The vestry is entered from the chapel through a doorway in the dividing wall, with a 2-centred surround from 1880, and from the churchyard through a doorway, in its north wall, also with a 2-centred surround. It is lit by a window in the east wall, also from 1880, which comprises an uncusped single lancet with a trefoil light above which lies beneath a 2-centred drip-mould on human mask stops. There is a disused fireplace in the south wall, from which a square chimney is corbelled out from the north wall and leads to an octagonal stack, all in limestone ashlar. Roofed as the north chapel. The suspended floor lies above churchyard level and there may be a cellar below.

There is neither an external drain nor a cutting. The church stands upon a low, but pronounced oval earthwork platform. There may have been a former south transept. The floor level within the tower may have been raised. Floors are suspended above a void. There may be a cellar beneath the vestry. External memorials lie significantly close to the church.

Except in the tower, the pre-19th century fabric lacks detail and cannot be closely dated. However, the chancel, the nave, the north transept and former south transept (see below) and the south porch form a unified plan that may be the product of a single building campaign; the presence of the transepts and the length of the chancel suggest that it may have been a later medieval undertaking, 14th century?. The tower openings suggest a date of c.1500. The north chapel and vestry are 19th century.

Fenton, writing c.1811, describes the south side of the church as featuring ‘an old arched aisle, which, from the aperture in its roof, seems to have been a belfry; on one side is a canopied recess covering a shelf, where formerly a recumbent effigy might have lain’ (Fenton, 1903, 220). The component described appears to have been a south transept, apparently in decay.

The first restoration can be dated to 1853 when the parish schoolroom was licensed for divine service  (Green, 1911, 235) but neither the details of the work, nor the architect responsible, are known. However, it can be seen that the restoration was extensive, amounting to a partial rebuild. The chancel, the south porch and the nave south wall were rebuilt, or at least refaced. The church was refenestrated and a window was partly rebuilt in the tower. The church was reroofed, refloored, replastered and reseated.

The north chapel and vestry are not shown on the Ordnance Survey first edition, surveyed in 1875, and it is apparent that they were the product of a second restoration, even though they are stylistically identical to the 1853 work. Thomas, 1964, mentions a restoration in 1880 – a date which fits the map sequence –  but he cites neither the details nor the sources.

The oak stalls, the softwood pews and the chancel rail are probably from the 1853 restoration. The sanctuary fittings, including the Minton tiled reredos, are probably late 19th century, from the 1880 restoration?. The organ in the north chapel, by Sweetland of Bath, is from 1914 (NLW, SD/F/29). The oak pulpit is 20th century.

The font has a square scalloped bowl, a cable-moulded cylindrical stem and a square base, all from the 12th century.

The churchyard features, to the north of the church, a masonry mortuary chapel, traditionally known as ‘The Sailors’ Chapel’, with a vaulted basement and a vaulted roof. It retains most of the original openings which date the building to the 15th century. South of the church are the remains of a churchyard cross.

The living was both a vicarage and a rectory, the latter having been granted, probably during the 12th century, to the Benedictines of Monkton Priory, Pembroke (Green, 1911, 234); Giraldus Cambrensis was the rector in c.1200. With Monkton’s suppression as an alien priory by Henry V, the rectory fell into royal hands. In 1461 it was granted to St Albans Abbey (ibid.). The patronage again fell into royal hands after the dissolution, but was acquired for a short period of the later 19th century by the Principal and Professors of St Davids College, Lampeter (ibid.), before passing to the Bishop of St Davids. The rectory was rated in the king’s books at £10 10s in 1833 (Lewis, 1833); it was suppressed in 1885 (Green, 1911, 235).

Presentations to the vicarage were made by the rector until the 17th century, when the advowson was acquired by the Bishop of St Davids (ibid.). In 1833 the vicarage was rated in the king’s books at £3 19s 2d and endowed with £400 royal bounty  (Lewis, 1833).

In 1998 St Mary, Angle, was a parish church. The living was a rectory, held with Castlemartin, Warren, Rhoscrowther and Pwllcrochan (Benefice 597) in the Archdeaconry of St Davids, Rural Deanery of Castlemartin (St Davids, 1997-8).