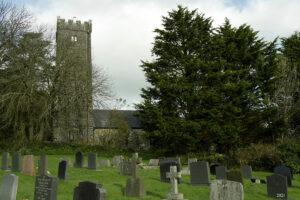 Reasons for Listing: Listed as a largely mediaeval church with a good tower and several surviving original features.

The present church consists of a 2-bayed chancel, a 4-bayed nave, a 3-bayed north chapel (absorbing former north transept), a single-bayed south transept with a skew-passage, a south porch (now a vestry) with a possible former parvis, and a 3-storeyed west tower. Construction is in local limestone rubble. Medieval chancel arch, arcade, transept and tower arches, east window (rebuilt) and south door, with limestone and yellow oolite dressings; other openings are mainly from 1886, in a variety of neo-Gothic styles imitating the original openings, with grey oolite dressings. Pointing is mainly from 1886, with some 20th century external render; the interior is plastered. The tower is barrel-vaulted. Roofs are slated gables throughout; the tower roof was not seen.

The chancel east window has 2 cusped lights with slightly ogival heads, simple Decorated tracery in a 2-centred surround featuring sunk spandrels and a central quatrefoil, and a 2-centred drip-mould on out-turned stops, all in yellow oolite from the mid 14th century but largely rebuilt in 1886. Above the window is a simple trefoil light into the roof-space, in yellow oolite from 1886 but now blocked. The south wall is pierced by a single lancet with a cusped head, in grey oolite from 1886 but replicating a 14th century original; a large area of blocking is visible externally to the west, which may represent a former ‘priest’s door’ blocked before 1885. Internally, a piscina, with an aumbry above, was noted east of the south window in 1925 (RCAHM, 1925, 16) but both are now blocked; a corbel for an earlier roof is visible on the internal face of the west bay north wall. The large, 2-centred chancel arch is in triple wave-moulded limestone ashlar from the mid 14th century, with a low, yellow oolite screen wall inserted in 1885. The profile of the chancel arch is reflected by a line of 5 medieval corbels above its west face, which were associated with a former rood-loft (see below). The flue from the heating chamber (see below) also rises through this wall to emerge as a plain square chimney with a cylindrical stack, from 1886. The softwood roof is from 1886 and has substantial, carved queen-post trusses arch-braced from the walls with curved knees, matchboarded above. The tiled floor is also from 1886.

The nave side walls exhibit an internal offset at three-quarters height, above which the wall has been heightened, during the post-medieval period?; in the west bays both walls have a pronounced external batter. The east bay side walls are arches into the south transept and the former north transept (now the north chapel west bay); both are plain, depressed 2-centred arches springing sharply from the transept side walls, probably from the earlier 14th century (see Structural Development below). A straight rood-loft stair lies to the east of the northern arch, entered from the north chapel and therefore mid 14th century at the earliest, probably contemporary with the chancel arch; both the lower and upper stair doorways have plain, segmental heads and the upper doorway, which emerges into the nave in the angle between the north transept arch and the chancel arch, is associated with loft corbelling. A further loft corbel lies above the south transept arch. The nave is lit by 2 windows in the south wall and one in the north wall; all have 2 ogival, cusped lights with pierced spandrels in square surrounds, in grey oolite from 1886 but the south wall windows are in situ replicas of mid-late 16th century originals. Between the south wall windows is a possible area of blocking that may represent an earlier window that was blocked in the 16th century. The nave is entered through the north wall of the central bay, through a doorway with a 2-centred, roll- and chamfer-moulded surround and drip-mould rebuilt in 1886; to the west, the external face exhibits an area of cut-back facework which may mark the site of a former north porch, while to the east are two internal, square stoup-recesses, medieval, lying one above the other. A south door lies opposite and has a chamfered surround possibly from the 13th century. The nave roof is like that in the chancel and similarly from 1886, though rather less elaborate, with king- and princess-posts. The passages are tiled over heating flues, from 1886, with suspended board floors and an underground chamber for a ‘Porritt’s’ stove, also from 1886 (now disused), in the central bays.

The north chapel communicates with the chancel through an arcade of 2 arches with plain, slightly chamfered 2-centred  heads; they have springers cushioned from cylindrical, limestone ashlar stops, and a similar central pier, all with plain abaci/capitals but with concealed bases, stylistically mid 14th century. The arch into the nave has been described above. The east and west gable walls are each pierced by a window like those in the nave, from 1886 but similarly in situ replicas of mid-late 16th century originals; there is an identical window, also originally 16th century, in the north wall, flanked by cusped single lancets like that in the chancel, similarly from 1886 and representing in situ replicas of 14th century originals. The gables above the east and west windows feature louvered single lancets into the roof-space, from 1886. The queen-post roof is similar to those in the chancel and nave and also from 1886. The suspended board floor is originally from 1886.

The south transept communicates with the chancel via a skew-passage in the thickness of the chancel south wall, (re)built in 1886 with a square profile and a low head. It is lit by a window in the south gable wall, like those in the nave and from 1886 but similarly an in situ replica of a mid-late 16th century original; a louvered lancet above, from 1886, lights the roof space. A cusped single lancet in each side wall, like that in the chancel, also represent 1886 rebuilds of 14th century originals, possibly re-using some dressings. The softwood roof is from 1886 and lacks trusses, all rafters having scissors-braces. The suspended board floor is originally from 1886.

The vestry was modified from a south porch, by blocking its doorway, during the 19th century but before 1886 (NLW, SD/F/32). The porch may formerly have featured a first floor parvis; the internal thickening of the north-east corner may have housed a former stair. The south wall was refaced, with an inserted square-headed single light, in 1886, removing much of the evidence of the (blocked) south door which was a large, plain full-centred semicircular arch probably from the late 16th – early 17th century. The roof is concealed by a 20th century hardboard ceiling but may be vaulted. The floor is concrete.

The west end of the church, and the nave north wall, lie in an external revetted cutting which may be at least partly primary; a shallow, concrete-lined drain surrounds the church. A rectangular earthwork platform lies between the south transept and the south porch/vestry, but probably represents a burial earthwork. The floors were raised in 1886. Floors are suspended above heating ducts and there is a heating chamber below the nave floor. External memorials lie significantly close to the church.

The 2 nave west bays have a pronounced external batter and may pre-date the 2 east bays; the west bays are not closely dateable but the south door may be 13th century. The nave may have been extended to the east when the transepts were built, probably during the earlier 14th century; they have identical arches and are thus probably contemporary though the north transept was larger than the south (as at a number of churches). The large, wave-moulded chancel arch, and the rebuilt/re-used east window, date the chancel to the mid 14th century, apparently contemporary with the north chapel which, though its arcade detail is unlike that of the chancel arch, has stylistically similar lancets (rebuilt from 14th century originals); the construction of the chapel, an early regional example, appears therefore to have initiated a major replanning of the east end and the chapel absorbed the former north transept. The west tower is stylistically late, from the mid-late 16th century, and similar to the slightly later tower at Lawrenny, Pembs.; the rebuilt windows indicate that a major refenestration of the rest of the church occurred at the same time. The south porch/vestry appears to have been entered through a semicircular arch that would give the porch a probable late 16th – early 17th century date.

The church was partially repaired in 1845 (Cadw, 1997, 1), but the details are not known. In the same year, Glynne visited the church (Glynne, 1886, 68) and noted that although most of the windows were sashes, the chancel and north chapel windows were medieval and much as today (see below). He described the tower as ‘tall and rude’, with a ‘clumsy battlement’ but without the string-course.

Elevation drawings from 1885 (NLW, SD/F/32), before restoration, show the church much as it exists today including the detail (see below), and kneelers for the gable upstands, but there was no nave north window. The tower string-course is shown. The south porch doorway had recently been blocked to form a vestry.

The church was restored in 1886 (ibid.) to the designs of the architect E. M. Bruce Vaughan, of Cardiff. The work was largely superficial. The church was refenestrated, but the new windows appear largely to be imitations of the originals and occupy their (rebuilt) embrasures, while the chancel east window largely re-used the 14th century dressings; the nave north wall window was, however, an entirely new opening. The skew-passage was (re)built. The south porch/vestry was largely rebuilt. The south and west walls of the upper 2 storeys of the tower were rebuilt. The church was reroofed and the interior was refloored, with a heating chamber for a ‘Porritt’s’ stove, reseated and replastered.

The exterior of the east end of the church was rendered in the early-mid 20th century; the tower may have been refloored at the same time.

The softwood chancel altar fittings and panelled reredos, the softwood stalls, the deal pews, the oak pulpit and the neo-Gothic, softwood tower screen are all from 1886 (NLW, SD/F/32). The north chapel altar fittings are later, from c.1900, brought from Kilgetty Mission Chapel in 1986 (Cadw, 1997, 2).

The limestone font has a square bowl and a cylindrical stem and base, probably from the 13th century but possibly later.

A piece of loose lapidary in the church comprises fragments of a limestone frieze or fillet, with a late medieval moulded design of medallions; it was formerly built into the churchyard wall.

St Mary, Begelly, was a parish church during the post-conquest period (Rees, 1932), of the medieval Deanery of Pembroke. The rectory appears to have always been in the patronage of the Lords of the Manor of Begelly, held of the Lordship of Pembroke. The church was, in 1291, assessed at £12 (Green, 1911, 242). East Williamston has always been a chapelry of the parish, first recorded as such in 1594 (ibid.); there was a second chapelry at Thomas Chapel, now lost.

In the mid 16th century both the Manor of Begelly and the patronage of St Mary were held by the Wogans of Wiston (ibid.), but by 1700 both had passed to the Philipps family of Picton Castle. In 1833 the living was a discharged rectory, in Philipps patronage and rated in the king’s books at £12 19s 2d (Lewis, 1833).

In 1998 St Mary, Begelly, was a parish church. The living was a rectory, held with Ludchurch and Crunwere (Benefice 815) in the Archdeaconry of St Davids, Rural Deanery of Narberth (St Davids, 1997-8).