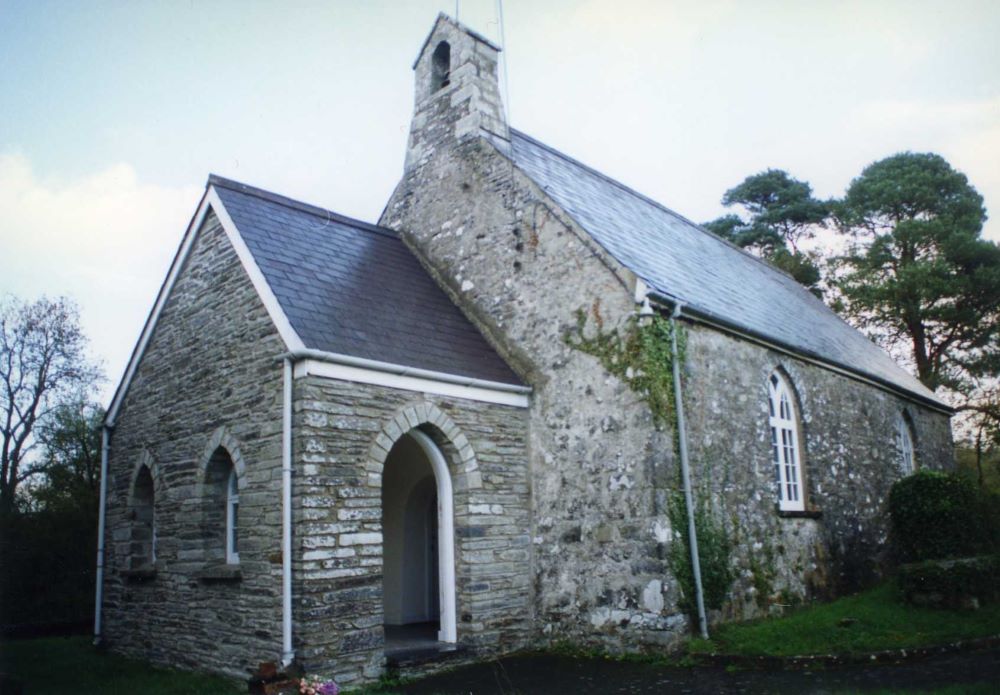 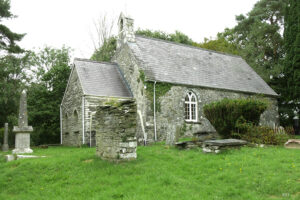 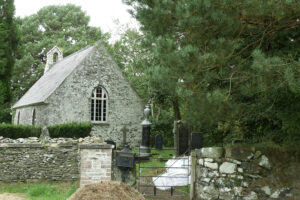 Church now redundant. Internal work being carried presumed to be for residential use.

The present church consists of a three-bayed chancel/nave, without structural division, and a 2-bayed west porch/vestry with an east-west structural division. Construction is in limestone rubble; the west porch is from the later 20th century and in roughly coursed slate rubble. Openings, except in the west porch/vestry, are neo-gothic and from the mid-19th century but lack dressings. There are the extensive remains of external render from the 18th – early 19th century, with mid 19th and 20th century repointing in areas; the interior is plastered. Roofs are slated gables.

The chancel/nave east window is a plain, 2-centred single-light opening inserted through the early render, from the mid 19th century with a rebuilt timber-framed transomed 3-light window; the window interrupts a blocked, earlier window. The upper courses of the side walls were (re)built in the mid 19th century; there are 2 windows in the south wall and 1 in the north wall, like the east window but 2-light, and also mid 19th century. The west door has a plain, semicircular head that is probably 18th century. The west gable carries a plain, ashlar gabled single bellcote from the mid-late 19th century. At the east end of the north wall, beneath the external render, are 2 areas of blocking; that to the east lying within the jambs and lintel of a window, possibly medieval, while the second area is amorphous. A third area of blocking in the centre of the south wall also lies beneath the render and within the crude jambs of a large window, probably post-medieval. The softwood roof is from the mid-late 19th century and has arch-braced, queen-post trusses, matchboarded above. The passages are quarry-tiled, with suspended board floors, from the mid-late 19th century.

The gabled west porch/vestry is an addition of the later 20th century, and is divided into two by an east-west wall, the porch itself occupying the southern half, with the vestry to the north. There are 2 plain single-light windows, with 2-centred heads, in the west wall, and a similar door in the south wall; the communicating door has a simple square head. The roof structure is concealed by a plasterboard ceiling; the floor is concrete.

The church lies upon a very well-defined, regular earthwork platform, with a steep scarp slope along the north and west sides, running out to the east along the south side; the core of the platform is natural but has been artificially enhanced, primary. There is structural evidence east of the east end. A shallow – medium depth external earth cutting lies along the south, north and east walls, secondary, exposing footings throughout. The floor is suspended over an underfloor void in the nave. Many external memorials lie significantly close to the south, north and east walls.

Brongwyn is the probable site of a medieval church, but the present structure cannot be closely dated. The chancel/nave fabric, however, is demonstrably pre-19th century, and at least one of the blocked windows may be medieval; a further blocked window may be 17th-early 18th century, while the west door is probably 18th century rather than any earlier. The original building may have been longer; a truncated north-south wall 2m east of the east wall may represent an earlier east end wall.

The church was restored in the mid-late 19th century when it received its present fenestration and the wall-tops were heightened or rebuilt. The present roofs, floors, internal finishes and seating are probably contemporary. The panelled dado, desk and pulpit are also mid-late 19th century. The west porch/vestry was added in the later 20th century.

The oolite font has a circular bowl, a cylindrical stem and octagonal base, all 19th – 20th century.

St Mary, Brongwyn is shown as a the site of a possible medieval chapel by Rees, 1932, of the medieval Deanery of Sub-Aeron. It had certainly been established by the 17th century and is shown by Blaeu, 1648.

Brongwyn had become a parish by 1833 but the living, a perpetual curacy, was still annexed – with Betws Ifan – to the vicarage of Penbryn (Lewis, 1833).

In 1998 St Mary, Brongwyn, was a parish church. The living was a vicarage, held with Newcastle Emlyn Holy Trinity, Llandyfriog and Troed-yr-Aur (Benefice 834) in the Archdeaconry of Cardigan, Rural Deanery of Emlyn (St Davids, 1997-8).

The church was formerly known as Betws Ithel, with a possible earlier dedication to a St Ithel (Various, 1994, 192).