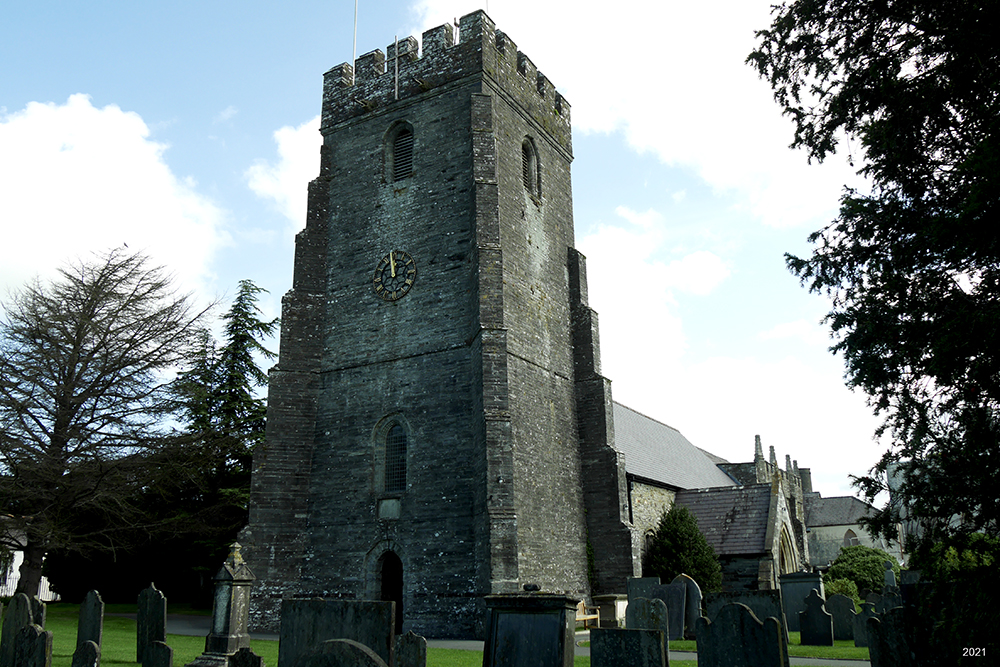 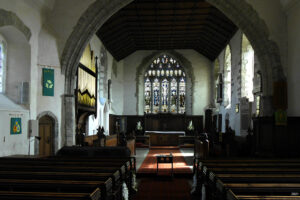 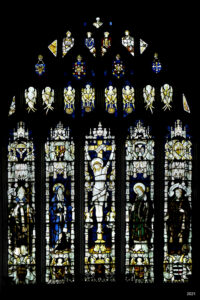 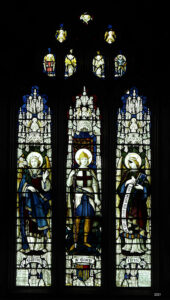 Reason for Listing: Listed as church founded after 1110 by Gilbert de Clare as Benedictine priory, under Chertsey Abbey, Surrey, first unequivocally recorded in charter of the LordáRhys ca 1165.

The present church consists of a 3-bayed chancel, a 5-bayed nave, a south porch, a 3-storeyed west tower, a 2-bayed vestry north of the chancel east bays, and a single-bayed transeptal organ chamber north of the chancel west bay. Construction is in local slate rubble throughout, squared in the chancel and tower; the organ chamber uses much brick. There are many medieval openings, the windows largely 16th century but rebuilt in the 18th century in the nave and tower; Decorated chancel with many 14th century features including the chancel arch; remainder of openings are mainly 18th century ?rebuilds and gothic. Vestry and organ chamber openings are later 19th century, neogothic, with yellow oolite surrounds. The chancel and tower exteriors retain early pointing but the nave and porch have poor quality incised pointing from the later 19th – 20th centuries. The interior is plastered. Roofs are slated gables; the chancel has a slated half-hipped roof, the vestry has a slated lean-to roof while the west tower roof was not seen.

The chancel is 14th century and a fine example of Decorated architecture. Externally, the side walls feature stepped buttresses reflecting its division into bays, those on the north side with pinnacles (re)built in the 18th century, those on the south side with plain 14th century finials. A clasping buttress at the north-east corner contains a spiral stair up to the crenellated parapet which lies on a bold, moulded string-course, all substantially restored in the 19th century; the stair is entered through a door from the chancel with a 4-centred surround from the early 16th century, and is lit by square slit-lights with yellow oolite surrounds, 14th century. A similar, but rebuilt doorway lies at the south-east corner, function? The fine, 5-light east window has Perpendicular tracery and a 2-centred dripmould, from the early 16th century but substantially restored in the 19th century; it apparently contains some ‘old glass’, pre-19th century? (NLW, SD/F/78). There are 3 similar, but 3-light, windows in the south wall and 2 in the north wall. The east bay south wall features an area of blocking or patching; internally, a piscina with an elaborate 14th century ogee-headed, crocketted and pinnacled surround, lies beneath the window.  Below the southern window in the central bay is the outline of a blocked, 16th century priest’s door with a 4-centred head. The tall, wide, 2-centred chamfer-moulded chancel arch is 14th century and has simple imposts; in the angle with the nave north wall is (spiral?) rood-loft stair reached through a doorway with a 4-centred, 16th century surround. A moulded-head corbel, from 1923?, is inserted into the northern arch soffit, function?. Above the arch, the external face exhibits an earlier roof-crease. The roof is hipped at the east end; the softwood, ‘wagon-roof’ ceiling is elaborately carved, with bosses at the frame intersections, largely from 1923. The passages are marble-flagged, with suspended woodblock floors all from 1923 when the level was lowered.

The nave north wall is pierced by three 3-light windows, and one 2-light window, uncusped with square oolite surrounds; all were built in 1703 re-using and/or copying the original dressings (see below), and have been subsequently partly rebuilt. There are 3 similar windows in the south wall, but a similar 4-light window in the east bay is more complete and was (re)built in 1847. The south wall has external stepped buttresses from 1703; there is a similar buttress against the north wall. The south door has a chamfered, 4-centred arch from 1703 but probably copying a 16th century original, which features a drawbar-socket. The south wall here has an internal corbel table at eaves level, presumably associated with the adjoining porch and from 1639. In the north wall opposite is a blocked, semicircular headed doorway from 1703; to the east is a contemporary internal stoup with a triangular, moulded head. The nave has a 5-canted, plaster ceiling on a Bolection-moulded ‘wall-plate’ and with similarly moulded central panel with medallions, from 1798 and restored in 1926. The passages are fully carpeted; the woodblock flooring is from 1926 when the level was lowered.

The south porch end wall was entirely rebuilt/refaced in the later 19th century, with a doorway in a 2-centred moulded oolite surround; at the same time a stepped buttress was added to the end of each side wall, and a cusped single lancet was inserted through the west wall. The softwood roof lacks trusses, the common rafters being scissors-braced and matchboarded above, all later 19th century. The flagged floor may be pre-19th century.

The 3-storeyed west tower was rebuilt in the 18th century in 2 stages, the ground and second storeys displaying different facework from the belfry stage. It is most atypical of the region. Stepped angle buttresses at the north-west and south-west corners, and a similar cross-buttress at the south-east corner, rise through the entire height of the tower. There is a basal offset, a string-course lies halfway up the external face, and there is a second string-course on the square spiral stair turret which projects from the eastern half of the north wall, is lit by simple square lights and entered through a 2-centred doorway. The ground floor communicates with the nave through a plain, 2-centred arch from 1711, and features the main west door to the church which has a moulded 2-centred surround, also from 1711. The ground floor has a suspended timber ceiling and the floor is quarry-tiled, from the later 19th century?. The second storey is lit by a single lancet in the west wall, similar to the west door and also from 1711; the east wall exhibits creasing for an earlier roof-line. The belfry stage was completed in 1748 and has a similar opening in all 4 faces; at a lower level, the east wall is also pierced by a semicircular-headed single-light window. The crenellated parapet lies on a bold, moulded string-course, from 1748.

The lean-to vestry was added in the later 19th century and has an external angle buttress at the north-east corner, and a plain, uncrenellated parapet defined by 2 string-courses. It is entered from the chancel through a 2-centred doorway from the centre bay north wall; to the east a contemporary open arch was later blocked, in 1923?; a 2-centred doorway in the north wall leads into the churchyard. The vestry is lit by a cusped, 2-light window with a 2-centred surround in the east wall, and a cusped, 4-light window with a square surround in the north wall, both later 19th century. There is a 19th century piscina in the south wall. The east half is separated from the west half by an internal wall breeze-block wall from the later 20th century, and is now an oil-fired boilerhouse. The softwood, lean-to roof is later 19th century. The floor is quarry-tiled above a former heating chamber, which led to a cylindrical chimney converted from the adjacent chancel buttress in the later 19th century.

The transeptal organ chamber was added somewhat later in the later 19th century, c.1877, and communicates with the chancel west bay through a chamfered, 2-centred arch inserted through the north wall; the vestry west wall was removed when it was added, and the gap given a segmental head. The external walls have an external basal offset; the quoins are in brick, there is a brick buttress in the centre of the north wall, with a blind medallion at the summit, and brick courses within the rubble facework. A triple lancet window lies either side of the buttress, with brick surrounds. The softwood collar-rafter roof is from c.1877; the woodblock floor may be from 1923.

The below-ground remains of conventual buildings may lie beyond the chancel south wall. There is neither an external cutting nor drain, but external below-ground oil tanks and piping lie adjacent to the chancel and vestry. Burial vaults may lie beneath the chancel floor. Floor levels were lowered in 1923-6; the floors are suspended over an underfloor void. There is a disused heating chamber below the vestry. External memorials lie significantly close to the nave south wall.

The chancel was the monastic church for the Benedictine priory of Cardigan. An inset sketch on the Blaeu map of 1648 purports to show Cardigan St Mary, in 1548, as a cruciform church with a west tower, and also a central tower; both towers are shown with spires. However, there is no physical evidence to suggest that the fundamental layout of the church was ever any different from that at present, and the illustration can be dismissed as fanciful.

Chancel features such as the piscina are in the Decorated tradition suggesting a late 14th century date; it is of high-quality construction and only paralleled within South-west Wales at Carew Church, S. Pembs. The chancel windows are Perpendicular and were inserted in the early 16th century when the parapet and buttress pinnacles were added (NLW, SD/F/82). The blocked south door was presumably associated with the former conventual buildings (ibid.).

The medieval nave, west tower and south porch were later largely rebuilt, beginning with the south porch in 1639 (Lewis, 1833). The nave was partly rebuilt in 1703 (ibid.) but much of the original fabric may have been retained (NLW, SD/F/82 – see also below). The west tower fell down in 1705 and was partly rebuilt in 1711, and completed in 1748, the junction between the 2 builds being visible  (Lewis, 1833; Evans, 1906, 330). If the 18th century rebuild is a copy, then the original tower was from c.1500 and built in the West Country Perpendicular tradition represented elsewhere in South-west Wales only at Carew, S. Pembs..

The eastern half of the nave north wall may have been rebuilt around 1798 (NLW, SD/F/78). The chancel buttresses and pinnacles appear also to be 18th century rebuilds (ibid.). The nave windows re-use 16th century dressings; however, an engraving of 1810 (Cadw, 1996, 15) shows early 19th century style windows in the nave south wall, accurately?; were the present window dressings imported from another site?. In 1833 the church comprised the chancel, nave, west tower and south porch (Lewis, 1833).

The nave south wall east window was rebuilt in 1847 (Cadw, op. cit.), and some alterations including reseating were undertaken in 1855 (ibid.). The vestry and organ chamber are late 19th century, had both been constructed by 1888 (Ordnance Survey 1:2500, Sheet XXXVIII.5 First Edition) but are not contemporary, the vestry being earlier. The organ chamber may have been erected in 1877, the date of the organ itself. Small sums were expended during 1882-6, and some restoration occurred in 1904-6 under L. Lewis of Cardigan (Cadw, op. cit).

The chancel was restored in 1923, to the designs of the architect W. D. Caroe, of Westminster (NLW, SD/F/82). The present roof panelling was installed, and the fittings were replaced. The restoration continued into the nave in 1926 (NLW, SD/F/83). The floor was lowered and refloored, and the internal finishes were replaced.

A boilerhouse was converted from the vestry east bay in the later 20th century.

The font has an octagonal bowl, stem and base, the bowl with arcaded and quatrefoil mouldings, medieval?

St Mary, Cardigan, was a parish church during the medieval period (Rees, 1932), of the  medieval Deanery of Sub-Aeron. It also served as the priory church for an establishment of Benedictines, founded during the medieval period as a cell of Chertsey Abbey in Surrey (Anon., 1859, 346). The conventual buildings appear to have occupied the site of the present Cardigan and District Hospital to the east of the church. At the dissolution, the revenue of the priory was valued at £32 (Lewis, 1833).

At the dissolution, the priory and church fell to the crown. The church remained in use as the parish church, while the conventual buildings were granted firstly to Bisham Abbey and then to William Cavendish, becoming a private residence (Lewis, 1833).

In 1998 St Mary, Cardigan, was a parish church. The living was a vicarage, held with Mwnt and Y Ferwig (Benefice 510) in the Archdeaconry of Cardigan, Rural Deanery of Cemais and Sub-Aeron (St Davids, 1997-8).