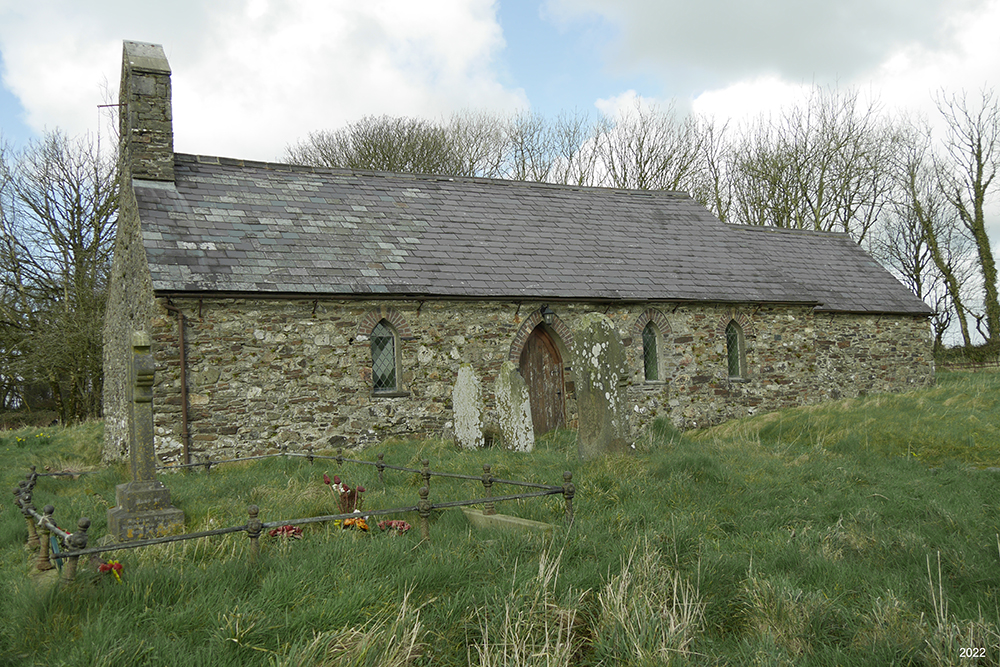 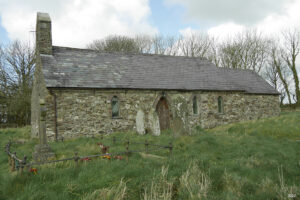 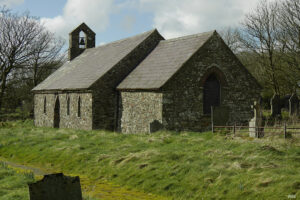 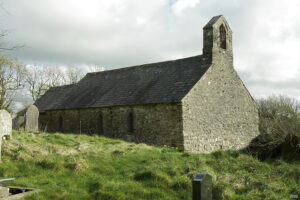 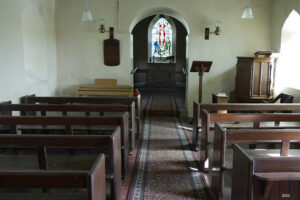 Archaeological potential – very good-excellent. External cutting around 100% of church, primary?; no evidence for floor level changes; suspended floors and underfloor void in 75% of church; no internal crypt/vault is evident; no evidence for former components beyond church.

The present church consists of a 2-bayed chancel and a wider 4 -bayed nave and a south porch. Construction is in medium-large limestone rubble, unsquared and uncoursed and without quoins. Fair pointing from 1928; the internal walls are rendered/plastered, 1928. The church was probably always entered through the south door. Roofs are slated gables, the nave probably always roofed at a higher level than the chancel.

The chancel east wall has wide external offset, of medieval date. The east window has a 2-centred rear arch, and an external 2-centred drip-mould that may have survived from the medieval church, and stylistically late 14th-15th century; the inserted window is from 1928. The north and south wall masonry is very irregular and may have been subject to successive rebuilds; both walls are blind. A vertical offset joint between the 2 chancel bays visible on the south wall exterior may mark a later medieval eastwards extension of the chancel; it only rises to half wall-height above which level the wall has been extensively rebuilt with much shale rubble. The plain chancel arch is very low and narrow, with a semicircular outline of convincing ‘Romanesque’ form and offset imposts suggesting the former rood-screen level.

The nave north and south wall windows are as the east wall ie. with possible earlier rear arches, here segmental; there are 3 in each wall. The south door has a square rear opening, again possibly early. The simple bellcote has been rebuilt.

A wide, medium-depth earth-cut cutting runs around all external walls, possibly primary, with a secondary concrete base and drain; footings are not exposed. There is no evidence for floor level changes. The floor is suspended in the nave, with an underfloor void. No internal crypt/vault is evident. There is no evidence for any former components beyond the present walls.

The church was restored at a late date, in 1928, but 3 years previously in 1925 it had already been described as ‘much restored’ (RCAHM, 1925, 117). Nevertheless, the basic – and simple – layout of the chancel and nave is unchanged from the medieval period. The nave is possibly 12th century, and its east wall broken through as a very small semicircular arch c.1200 into the new or rebuilt chancel. The chancel may have been extended eastwards by one bay in the later medieval period.

The church was subject to a brief account in 1925, just prior to the restoration of 1928 (RCAHM, 1925, 117). It had, apparently, already lost most of its medieval features with the exception of the chancel arch, and the windows were all square with timber frames. However, some earlier features had evidently survived – one of the roof-beams was dated 1811 (now gone?).

The restoration of 1928 was  medium impact (NLW, SD/F/197). The openings were all rebuilt, but as noted, they may re-use earlier openings. All, including the east window, are single lights with 2-centred brick heads but without surrounds. The rebuilt south door is similar. The bellcote on the west wall was (re)built as a crude, gabled structure, shouldered, and with a single opening beneath a 2-centred brick head. The interior of the church was replastered, but the extent of removal of the existing plaster is unknown. Chancel and nave were both roofed with simple bolted softwood collar-rafter trusses, with a very low pitch in the nave; there is no tabling. The chancel, and nave passages, have since been refloored but the suspended board floors in the nave, with free-standing softwood pews, are from 1928, as is the pulpit. The altar rail may be re-used from the 19th century. A simple vestry curtain screens off the south-west corner of the nave.

There has been some further work. The chancel saw numerous repairs in the later 1930s (Pembs. R.O., HPR/17/6), but it was also refloored with red quarry tiles in the west bay. The nave passages were similarly floored. The proposal to add a south porch to the church in 1938 was never carried out (Pembs. R. O., HPR/17/7). The limestone altar table was built in 1963 (Pembs. R.O., HPR/17/9); at the same time the underlying chancel east bay floor was probably given its surface of large limestone flags. The credence shelf is similar.

The font has scalloped square bowl, a cylindrical stem and a square base, of 12th century form; it has been retooled and ‘spoilt’ (RCAHM, 1925, 117).

St Mary, Hayscastle, appears not to have been a parish church in the post-conquest period (Rees, 1932), but seems to have been a chapelry of the parish of Brawdy, in the medieval Deanery of Rhos.

The benefice was originally a curacy in 1579 which belonged to the vicar of Brawdy (Green, 1912, 198), which itself was a prebend of St Davids Cathedral (Green, 1911, 249). It was not mentioned either by itself or with Brawdy in the ‘Taxatio’ of 1291, but in 1579 the Bishop of St Davids, Richard Davies, granted ‘the prebend of Brodye and the chapel of Hayscastle (except the vicar’s portion of the same parsonage or prebend)’ to Peregrine Davies, Richard Davies and Richard Parry, of Abergwili and Llanddarog, Carms., for life, for the yearly rent of £22.

St Mary had become the parish church of Hayscastle by the early 17th century, but the vicar of Brawdy continued to serve both parishes until the later 20th century (Green, 1912, 198). The benefice was a discharged curacy in 1786 which with Brawdy still constituted a prebend attached to the deconal stall, and both were in the patronage of the Bishop, as Dean (Green, 1911, 249). The two livings were valued together at £26 annually and rated in the king’s books at £3 18s 9d. By 1833 Hayscastle was discharged vicarage (Lewis, 1833).

In 1998 St Mary, Hayscastle, was a parish church. The living was a vicarage held with Camrose, St Lawrence and Ford Chapel (Benefice 636) in the Archdeaconry of St Davids, Rural Deanery of Roose (St Davids, 1997-8). 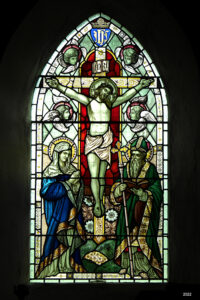