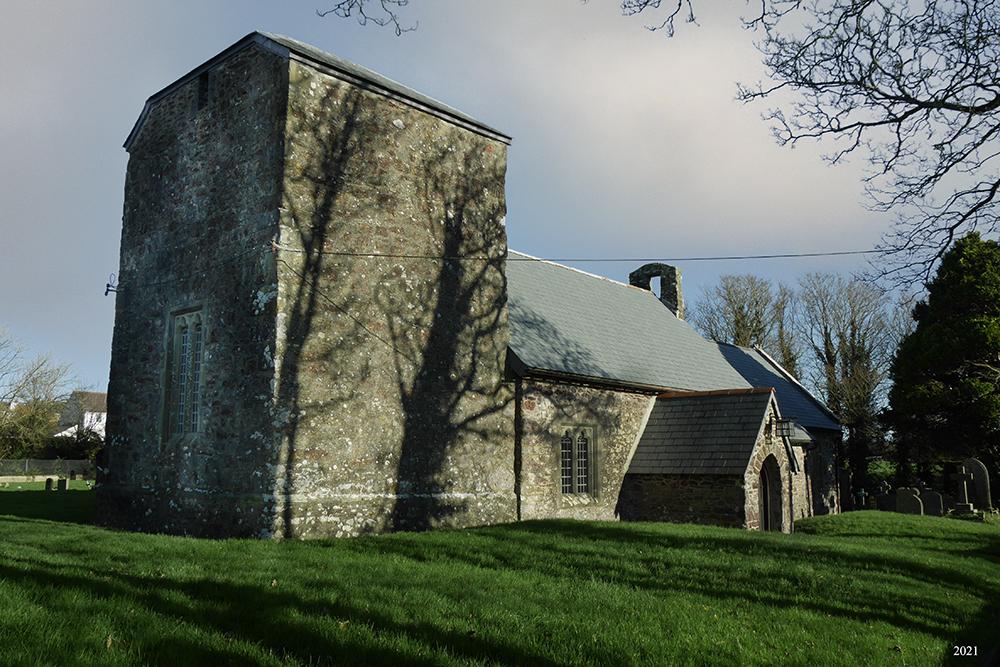 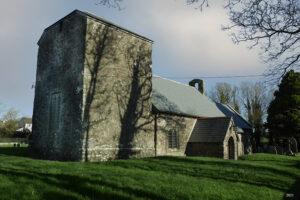 Archaeological potential – very good. Medium-depth external cutting, concrete-lined, around 100% of church, footings exposed; no evidence for floor level changes; floors not suspended, but heating flues below nave; no internal crypt/vault is evident; no evidence for former components beyond church; memorials lie significantly close to 5% of church.

The present church consists of a 2-bayed chancel, a wider 3-bayed nave, a north porch (now vestry), a south porch and a 2-storey (truncated) west tower. It is now entered from the south. A timber lean-to boilerhouse lies between the nave south wall and the north porch west wall.

Construction is in large limestone and Old Red Sandstone rubble, unsquared and uncoursed, with crude medieval quoins. Ribbon pointed, 1904, over scant remains of 18th century render, and with extensive later 20th century repointing. Internal render/plaster, 1904, except in the chancel which is pointed, also from 1904. Roofs are slated gables, the nave always roofed at a higher level; the west tower has a slated hipped roof; the boilerhouse has a timber lean-to roof.

The chancel east window has 3 cusped lights with Perpendicular tracery in a 2-centred oolite surround, early 16th century but rebuilt/restored in 1904. The east bay side walls each have a single lancet with sunk cusps in 2-centred oolite surrounds, originally c.1500 (RCAHM, 1925, 121) but entirely rebuilt in the later 20th century. Internally, the east bay side walls each feature a medieval socket and corbel, representing sconces, the northern corbel rebuilt in 1904; below, each wall also features a plain square medieval recess, the southern with a circular oolite piscina bowl from 1904. The blocked ‘priest’s door’ in the south wall of this bay (RCAHM, 1925, 121) is now scarcely discernible. The west bay side walls are thrown out as square projections, flush with the nave side walls and lean-to roofed as the main roof slopes, with segmental-headed internal recesses. The northern recess is squinched to the chancel main north wall; both recesses are lit by single cusped lancets with square oolite surrounds from c.1500, rebuilt pre-1904?. The southern recess contains the effigy of a knight, loose, now much worn. The plain 2-centred chancel arch is probably 14th century; above it a shallow recess on the west face leads up and into a sanctus bellcote of simple form, low-gabled and with a simple lintelled opening, 14th century?, much restored in the later 20th century. The chancel roof is of softwood comprising common rafters with collars. The floor is black-and-white tiled and from the 19th century.

The nave east bay side walls each display a window with a segmental opening of pre-1904 date, medieval?; 2-light windows with sunk cusps and spandrels in square oolite surrounds were inserted in 1904. To the west, the north wall has an internal tomb recess with a depressed segmental head, 14th century?, for the effigy now loose in the chancel?. Both the north and south doors are still open; the north door has a full-centred semicircular head of early 13th century date but the south door is later, with a segmental head, 14th century?. Internally, medieval carved-head corbels are (re)set above the doors. The west bay north wall is thrown out as a square projection with a ‘clerestorey’ lean-to roof and an internal recess with a segmental head (cf. Hubberston); possibly originally a medieval baptistery (Freeman, 1852, 177). It is lit by a window like those in the west bay, inserted in an existing opening in 1904, as is the south wall. The nave roof is of softwood comprising common rafters with collars arch-braced from the wall-plate, from 1907. The woodblock floors, on concrete, are from 1904 while the tiled passages with heating flues are mid-20th century.

The north porch is of large rubble, roughly squared and coursed. The doorway in its north wall was blocked in the 19th century when the south porch was built, and it was converted into a vestry; it has a rounded 2-centred head of late medieval date. A window has been inserted through the blocking, a single cusped lancet in a 2-centred surround that may be pre-1904. The gable roof is of softwood common rafters. 1904; floored as the nave.

The west tower has lost its original belfry stage, and is now of 2 storeys with a hipped roof. It is early, probably late 14th century, and even when complete was not a ‘typical’ Pembrokeshire tower. It is not tapered and lacks the basal batter and string-course characteristic of the district. A square spiral stair turret occupies a shallow projection from the north-east corner,  entered through a narrow 2-centred doorway of the later 14th century in the nave west bay; it is lit by slit-lights. The ground floor north and south walls have are entirely occupied by shallow, 2-centred internal recesses of unknown function but unique in the region. In the west wall is a window like those in the nave, from 1904, re-using an earlier opening?. The ground floor has a 14th century barrel-vault with a 2-centred profile, reflected in the arch opening into the nave, and is floored as the nave, from 1904. The second stage has simple slit-lights. The tower is in good condition.

A medium-depth external cutting concrete-lined drain surrounds the entire church, from 1904, exposing footings in areas. There is no evidence for floor level changes. The floors are not suspended, but the nave floor lies above heating flues. The boilerhouse against the nave north wall is not below-ground, and no internal crypt/vault is evident. There is no evidence for former components beyond the present walls. 20th century memorials lie significantly close to the east wall.

The church and its plan are fundamentally medieval. The nave is earlier 13th century, with a full-centred semicircular-headed north door, but the chancel arch, and chancel, appear 14th century. The chancel west bay is flanked by the projecting recesses frequent in Pembrokeshire (‘choir-recesses’, cf. Johnston and Robeston West) which display butt-joints to the nave, but the recesses themselves may be later, 15th century?. Both north and south doors are present and still open; the north door was originally the main entry and is earlier of the two, and was given a porch, probably in the 16th century. The south porch, despite its medieval appearance, is 19th century (see below). The west tower is truncated and now displays a hipped roof from the 18th century. It is thought to be early (Freeman, 1852, 171) and may be late 14th century.

The tower was truncated between 1740 and 1770; it is shown with crenellations in a naive but accurate sketch of the church on a map of 1770 (NLW, Herbrandston Glebe Lands, survey by J. Butcher, 1740). The sanctus bellcote (with a bell) and the large east window are also shown, and the chancel south door is depicted as open. The south door is shown as open, but without a porch (see below). The bellframe, constructed at the present level, bears the date 1770 (RCAHM, 1925, 122), when the present hipped tower roof was presumably constructed. The truncated tower was noted by Richard Fenton c.1811 who, however described the interior of the church as ‘rude and simple to a degree, and contains nothing (to) arrest the antiquary’s attention’ (Fenton, 1903, 99). He noted that the effigy already lay loose in the chancel.

Despite its convincingly medieval appearance, the south porch was not built until after 1838, not being depicted either on an estate map of 1830 (Pembs. R. O., D/RKL/1194) or on the unusually detailed tithe map of 1838 (NLW, Herbrandston, 1838). It has a 2-centred doorway and the gable roof is of softwood, as the north porch roof, and the floor is tiled directly on the substrate. The south porch was present prior to 1904 (NLW, SD/F/200), by which time the chancel south door had been blocked. At the same time, the north porch door was presumably blocked and the porch converted into a vestry, and the window inserted?. The chancel tiled floor is 19th century and may belong to the same period.

The church was restored in 1904 (NLW, SD/F/200) to the specifications of the architect C. Ford Whitcombe of London, Newbury and Broad Heath, Worcs., and at an estimated cost of £350. The restoration was low-medium impact. The nave was refenestrated and replastered, but the extent to which the existing plaster was removed is not known. The chancel was entirely stripped, and pointed. The chancel recess windows may now have been rebuilt and the south porch/vestry window possibly inserted. The entire exterior was repointed. The chancel and nave were reroofed, without tabling (it had been intended to retain the existing nave roof and to fix matchboarding). The nave, tower ground floor and north porch/vestry were refloored in woodblock on concrete and given oak seating, with panelled wainscot dados. The present altar rail may have been fitted. The font was moved to its present position.

The oak-panelled altar table and reredos were installed in 1927 (NLW, SD/F/202); the pulpit and desk are similar and presumably contemporary.

A timber lean-to boilerhouse was constructed between the nave north wall and the north porch west wall in the mid-20th century (after 1925 – RCAHM, 1925, 121), when the tiled nave passages with heating flues were laid. It has an asbestos flue.

The chancel side windows, originally from c.1500, were entirely rebuilt in the later 20th century.

At the dissolution, Haverfordwest Priory and its appurtenances fell to the king, including the patronage of Herbrandston which remained in royal hands (bid). In 1786, the rectory was rated in the king’s books at £7 13s 4d, in yearly tenths 15s 4d (ibid.).

In 1998 St Mary, Herbrandston, was a parish church. The living was a rectory held with Hasguard and St Ishmaels (Benefice 823) in the Archdeaconry of St Davids, Rural Deanery of Roose (St Davids, 1997-8).