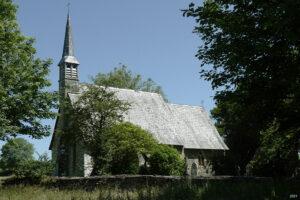 Reason for Listing: Included for its special architectural interest as a small Victorian estate church of definite quality with good detail including stained glass.

The present church consists of a single bayed chancel, a 2-bayed nave, a south porch and a lean-to vestry of 1 bay, north of the chancel.

The chancel and nave are constructed in uncoursed slate rubble, and probably represent the church as built in 1855. The vestry and porch are of slate ashlar suggesting that they were added in 1872; there is no structural evidence for an earlier porch or vestry. The external pointing is of 1872. All internal walls are rendered/plastered. All dressings are in sandstone. The chancel and nave openings are from 1855; the windows have 2-centred neo-gothic surrounds, mainly of plain form, and the south door is similar. The 1872 openings in the south porch and vestry are likewise similar. There is some external buttressing, like the vestry and porch in slate ashlar, and possibly added in 1872. From a buttress on the west wall rises a square, half-timbered bellcote, of good quality, with a slated timber spire, possibly of 1872. The roofs are slated gables while the vestry has a slate lean-to roof; all may have been renewed in 1872. The floors are suspended except in the porch, and from 1855 and 1872.

No physical evidence for the earlier church is now present. A shallow external drain runs all around the church. There is no evidence for internal floor level changes. There is an underfloor void beneath the suspended floors, but no vault or crypt is evident.

The pre-1855 church appears to be shown in the same location as the present building on the tithe map of 1837 (NLW, Llanfair Nant-gwyn, 1837), which depicts the church as a small, cruciform structure. This may indicate the presence of a south porch and vestry, but it is equally possible that the church has been conventionalised for the map. No description is known; Samuel Lewis, writing in 1833, described it as being ‘not distinguished by any architectural details of importance’ (Lewis, 1833).

According to Rees, Llanfair Nant-gwyn was a parish church during the post-conquest period, of the medieval Deanery of Cemais (Rees, 1933). Yet it was apparently a free chapel held with the vicarage of Eglwyswrw, and appropriated to St Dogmaels Abbey (Green, 1912, 240); there is no entry for the church in the ‘Taxatio’ of 1291 (Lewis, 1972, 99). During the later medieval period it was united with different benefices (ibid.). The living was a perpetual curacy.

At the dissolution, the advowson fell to the crown and in 1594 was described as a free chapel curacy in the hands of the king (Green, 1912, 240), but was associated with a certain R. Buddes (Lewis, 1972, 99) who presumably had obtained a lease from the crown. Later presentations to the curacy were made by the Bowen family of Plasybridell and Clynfyw (ibid.).

In 1998 St Mary, Llanfair Nant-gwyn, was a parish church. The living was a vicarage, held with Nevern, Y Beifil (Bayvil), Eglwyswrw, Meline and Eglwyswen (Benefice 806) in the Archdeaconry of Cardigan, Rural Deanery of Cemais and Sub-Aeron (St Davids, 1997-8).